The history of water in the land once called Palestine (Ward, Ruckstuhl, Learmont, 2021) 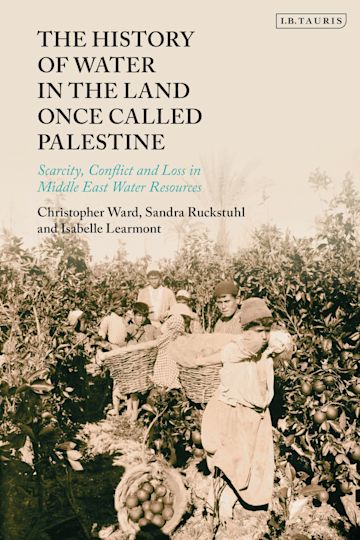 To cite this Review: Messerschmid, C. (2022). Review of “The History of Water in the Land once called Palestine”, I.B. Tauris 2021, by C. Ward, S. Ruckstuhl and I. Learmont, Water Alternatives, http://www.water-alternatives.org/index.php/boh/item/321-ward1

This book tells the water history of Palestine (and Israel) through an in-depth physical, hydrological account of its water resources, their appropriation and use over time, together with several related fields, such as economy, sociology, technology and of course water politics in the so-called “water conflict” or, more correctly, a rather stable, 140-year old system of colonial appropriation. The book closes a real gap in the literature. It provides a long-haul historical overview over water and its politics from the late Ottoman era (1850s) and until today’s post-Oslo period while so far, and with few exceptions (Rouyer, 2000; Sosland, 2007), most studies focused on certain aspects or short periods of this overall story.

The book is very well written. Even complicated schemes – with protracted and confusing rounds of planning and re-planning, negotiating and re-negotiating, together with step-wise practical interventions on the ground – are well developed and presented in a clear and understandable way. The book is also extremely rich in details and this is probably its main strength. The material is well researched and the story functions in a deeply empirical manner. Its main lessons are provided with a wealth of concrete, historic specific details on water – the hydrology, the politics, the economy, the diverging interests of different actors, the legal clout and the far-reaching impacts it had and still has on both the Palestinian and Israeli societies. Through these specific examples, it tells a heavy, at times, breath-taking and deeply informative story. The book hereby draws on diverse sources, such as oral history, statistics of water and water-economy and on agreements, water planning schemes, on laws and regulations, on negotiations, or rather, one-sided decrees and on their also mostly unilateral, implementation. This rich detail makes it a compelling read for both, beginners and experts to the subject alike; i.e. it provides an introduction but also serves to deepen the understanding of the hydro-politics in Palestine, in Israel and its occupied territories.

Still, the reader is left with mixed feelings. This concerns not so much the minor weaknesses in editing and footnotes and the, at times, factual errors in hydrogeology or other technical detail (almost unavoidable in such a deep, complicated and highly contested as well as mythologized subject). As a matter of fact, the authors do rather well with such loaded topics and their detailed accounts avoid many of the common, false and all-too-often politically interested water myths and misrepresentations, but not always…

The mixed feelings rather stem from what may be called an attitude of the authors, an apparent ideological pre-disposition towards the subject and its lessons - an unequal treatment of the two sides of the “conflict”. Especially in the first chapters, from the introduction up to the Nakba (1947-49), many of the Zionist water myths are either reiterated or insufficiently exposed; interestingly, not in the empirical evidence provided, but in the summarizing statements and framing.

In almost every chapter, the reader stumbles over conclusions and summarizing statements with a false sense of symmetry between the two sides. Yet, these conclusions cannot be reconciled with the empirical detail provided by the authors themselves. While the examples tell a heavy story of colonial appropriation, the authors shy away from simply spelling this out in their summarizing statements, which are loaded with euphemisms. The reported facts evidence a powerful tale – the story of one big, uninterrupted sequence of unilateral Zionist appropriation, forceful and at times violent and twofold: as robbery of nature and robbery of neighbours (from Palestinians or Arab riparians). The authors pile example upon example of an astonishingly brutal and openly racist settler-colonialism that expresses a spirit and a strikingly evident practice of hydro-apartheid. If only this was ever spelled out or at least alluded to… Instead, the factual evidence is often contrasted by summarizing messages of a dangerously misleading hope for peace and reconciliation. Not only are these messages false; they are, in the true sense of the word, ideological, i.e. into the face of the empirical evidence provided by the authors themselves. Ideology trumps empiricism.

Zionism as a belated, 20th century form of colonialism and as a historical (and currently accelerating) pathway of violent appropriation and dispossession is portrayed as innocent. More than that, the authors often use a tone of admiration – for what Zionists call their ‘conquest of nature’ or rather, of nature and of their neighbours[1], expressed through the notions of “effectiveness, achievement and efficiency” of the Zionist actor and his actions. By contrast, Palestinians are not portrayed as actors but as passive victims. To be clear, Palestinians all too often were and still are being made victims, indeed, and the book provides ample evidence for this. But in such instances, the authors manage to portray them as victims of a subject-less fate, rather than a very visible and identifiable actor (Israel, the pre-state Zionists, the British Mandate, etc.). Last but not least, the heavily interfering outsiders from “the West”, today’s donor states and Western diplomatic (and hard power) actors, are often mis-portrayed as well-intending but helpless. The politically intended and strongly conscious Western inaction in the face of blatantly illegal unilateral action by Israel is often presented as inability or simply is overlooked and not further highlighted.

This ideological bias becomes most visible in the chapters on the occupation (1967 forward). Despite the detailed evidence, the occupation is often portrayed almost as a blessing (at times, even as a blessing for the Palestinians!). And, in some instances, the authors distort the facts to allow for their ideological choice of portrayal. To show how Palestinians benefitted from the occupation, the authors present some erroneous numbers on Palestinian water use before and under the occupation (e.g. tables 6.1 and 6.2 that are contradicted by the tables in chapter 7) while depicting Israel as fulfilling a water “stewardship role” (p.98-100) and a sustainable manager and protector of water yields that graciously provided Palestinian villages with piped water for the first time (p.107, 112).

Maybe the most obvious – but not strongest – example of introducing bias is that of “Fairuz from Zababdeh” (no family name provided). Her example – quoted after Templin (2011) – is pulled out and repeated several times throughout the chapters and in exceptionally lengthy footnotes. In Chapter 6, and its final summarizing subchapter entitled “Attitudes and sense of loss” the grandson of this old lady from a small village in the North-east-West Bank reports her saying (p.116): “My grandmother like Jewish so much. You know, because Israel, they came here, they make everything for Palestine, but especially for Zababdeh. They give electricity, they give it water, they kill the mosquitoes, she said that. When they came here, the life became better”.

Just as if the occupation was a blessing, and Palestinians grateful for this 55-year old special military treatment… It may well be that one could find one such old lady in the West Bank with such an attitude and giving such an account. But the selection, highlighting, and repeated reference to this isolated account throughout the book is a choice, an ideological, political choice by the authors and a bizarre distortion of reality, i.e. life under occupation. To present such a bizarre statement as being anywhere, even remotely, near being representative of the Palestinian “attitude” towards the occupation or of its factual outcomes is adding insult to injury. For example, just to recall one central feature of the occupation: the largest, freshest and most productive groundwater basin is the Western Aquifer. In this transboundary basin, which fills up in the West Bank Mountains and drains underground into the Coastal Plain beneath Israel, the number of new Palestinian wells, permitted by Military order # 158 from November 1967, until Oslo-II (1995) was precisely – zero. And from Oslo until today, another zero. Or to put it plain and simple, Israel’s occupation in the water sector is but one uninterrupted regime of de-facto annexation, discrimination and dispossession, throughout the diverse Israeli governments and administrations – relentless and unremitting; not as a mere subjective Palestinian “perception” and most certainly not as a benevolent blessing.

There is also bias and one-sidedness in the style. A tone of suspicion towards the Palestinians is paralleled with one of good faith towards Israel and its water-stories. Israeli notions are presented as facts, whereas the conclusions on the Palestinian side are constantly presented as mere subjective impressions, as “feelings”, “views”, “perceptions”. The authors present the stark facts of hydro-dispossession whereby every aspect of the Palestinian water sector (down to the smallest well or pipe) is shaped through military orders in place since 1967 (the Military Order # 158 for instance forbid any new Palestinian wells to be dug in the large and highly productive transboundary Western aquifer) in great detail and even lay out the explicit obligations to an occupier under international law. Yet, they go on to summarize, repeatedly, that Palestinians only “view” or “perceive” these extreme and globally unheard-of measures of dispossession as unfair, biased, illegal, self-interested by Israel, intrusive, and oppressive.

Another way of distorting and downplaying the overall dark legacy of Zionism is the effort spent to falsely divide and discriminate between good and evil occupiers – between Labour and Likud. Here, the labour governments and their basically benevolent responsible approaches, there, the bad, sinister Likud administrations and their evil-intended practices. Again, an ideological distortion that is hammered out despite the evidence provided.

Israel’s “liberal approach” under a decade long Labour government between 1967 and 1977 for instance is said to have “contained elements of good practice… The approach combined public control of the allocation… through regulation with promotion of potable water supply… Water-use efficiency measures were encouraged in order to increase production and incomes... Support for Palestinian economic development and … modernization of agriculture. Good practice water regulation was introduced – although this was seen [sic] as two-edged sword by Palestinians …” (p.93; emphasis added)

In the strongest statement of the entire book, on page 148, and after they had quoted a Palestinian on how hard it is to make plans when settlements grow, the authors write: “another way of putting it would be […that of a] state whose actions suggest a permanent occupation and progressive dispossession” and, commenting on “Civil Administration restrictions […], there was a considerable suspicion, that overall, the intended outcome was to make life difficult” for Palestinians in Area C (e.g. the 60% of the West Bank under exclusive Israeli control as per the Oslo-II accords) (emphasis added).

To sum up, this is a highly informative book whose unfortunate ideological bias is exposed and disproven by the empirical base of reported figures and facts on the ground.

[1] On the side and as a telling detail, the term for ‘conquest’ used in Hebrew in the well-known Zionist theme for the ‘conquest of nature’ (‘kibbush ha-teva’ - כיבוש הטבע) happens to be the same term as the one used for “Occupation” (e.g. Israel’s ongoing military occupation of the West Bank, Gaza and East-Jerusalem).