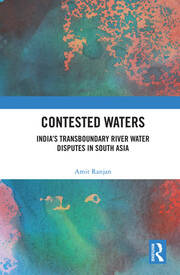 When water crosses national boundaries, it becomes an international issue, implicating sovereignty. Cooperation in managing transboundary water resources is difficult, as states are usually reluctant to give up their exclusive and indivisible authority over the resource (Alam et al., 2009). As a result, water becomes a potential source of friction among basin states, as each sovereign state aims to maximize its objective from the river basin. The interaction between the sovereign states is governed by several factors, such as geographical position, national interests, legal and policy frameworks, historical relationships, and asymmetric power relations; thus, transboundary water interactions are complex and inherently political.

The book Contested Water: India’s Transboundary River Water Disputes in South Asia is a timely contribution. I say so because, in the last few decades, most scholarship focusing on South Asian Rivers have applauded the cooperation between India and its neighbours, as enshrined in existing arrangements such as the Ganges Treaty, Indus Treaty, hydropower cooperation, and Memorandum of Understanding on data sharing between India and its neighbours. These cooperative arrangements need to be acknowledged but over-emphasizing their importance leads to overlooking the political context that led to such cooperation and the fact that socio-political contexts are constantly evolving. This book recognizes the emerging water disputes and contestations in South Asia that range from silent fuming to public displays of hostility and are closely connected to the region's geopolitics. The book thus brings in a fresh perspective by re-looking at existing cooperative arrangements in the context of current socio-political and economic developments and new challenges such as climate change.

The book begins with an overview of South Asia as a region and stresses that historical, political, and economic factors influence the definition of South Asia itself, with a tragic history made of several partitions rendering the notions of ‘region’ and ‘regionalism’ particularly sensitive (Mohammad-Arif, 2014). The book also discusses the distinct position of India in South Asia and the bilateral relationship it shares with its neighbours. This background helps the readers to understand how historical and evolving geopolitics influence India’s river water interactions with its neighbours. The chapter (briefly) highlights China’s expanding footprint in South Asia. China is creating and strengthening its bonds with South Asian countries, except for Bhutan, through trade, which includes investments in water infrastructure projects. Chapter 2 River water disputes between India and Pakistan clearly states that India-Pakistan water disputes are driven by the political relationship between the two countries. The Indus Water Treaty (IWT), agreed upon in 1960, has survived a series of hostilities between India and Pakistan, including two full-scale wars and one limited conflict in Kargil in 1999 (Malik, 2019). While partition-related memories have always been an issue of contestation, the hostile India-Pakistan relationship has, of late, also led to water sharing disputes. The author rightly points out that, in the present circumstances, re-negotiation of IWT is not an option, and that IWT survived three wars is no guarantee that that it will in the future, due to looming water crises in both countries with growing water demands.

Chapter 3 River water disputes between India and Bangladesh is interesting as it sheds light on the subtle conflicts that persist between two countries that have, broadly speaking, a positive bilateral relationship. These subtle conflicts are closely related to water sharing, such as illustrated by the Teesta water disputes, in a context where India’s cooperation remains crucial for Bangladesh electricity trading with Nepal and Bhutan, and Bangladesh’s growing trade relationship with China. Chapter 4 River water and hydropower power projects, focusing on India’s relationship with upper riparian Nepal, provides an interesting insight on both countries' chaotic relationship. Despite treaties and agreements signed on major rivers, India is often accused of exploiting Nepal’s water resources for its benefit. Despite India–Nepal sharing strong cultural, religious, political, and economic ties, several issues related to hydropower generation, flood control, irrigation development, and navigation remain unresolved. Nepal’s attempt to bring China to break India’s monopoly may play a role in the future India–Nepal water negotiations, which is yet to be seen. The India–Bhutan relationship, which is often seen as a symbiotic tie between a large and powerful country and its smaller neighbour, is explained in Chapter 5 Concerns over India – assisted Hydropower Power Projects in Bhutan. The chapter unpacks the fact that all is not well between India and Bhutan as there is a growing consensus that India is utilizing Bhutan’s water to meet its benefit, undermining Bhutan's economic and environmental interests. Such apprehensions, if not resolved, may raise doubts and mistrust leading to political and economic consequences for both countries.

The book's conclusion provides an excellent summary of the evolving water conflicts between India and its South Asian neighbours and offers some suggestions to overcome the situation. While these conflicts relate to broad geopolitical tensions, there is also a specific hydro-political challenge that is emerging. India’s water negotiation is influenced by the narrative that "South Asian neighbours are inconsequential countries" (p. 163) but India’s weakening influence over South Asian countries, and its failure to act to lead the way to water cooperation, is emphasized in all chapters. The book’s main argument is that there is a looming water crisis in South Asia, and that South Asian rivers are contested. However, what seems to be missing is an elaborate discussion of the role of power and its bearing on transboundary water negotiations and contestations. For instance the relationship between India and Bhutan is cited as symbiotic and positive, bringing significant economic benefits, but India is also considered to be a ‘benevolent hegemon’ with respect to upstream Bhutan. Similarly, power assmetry between India and Bangladesh has resulted in asymmetric negotiations and treaties between the countries. It is important to recognize and analyze such power asymmetries, and how it may influence basin-level negotiation or cooperation in South Asia now as well as in future. I stress “future” because the evolving socioeconomic context, as discussed in the book, may influence the existing power structures between the riparian states, resulting in further conflicts.

Despite these shortcomings, the book emphasises the need for extensive cooperation between India and its South Asian neighbours to avoid water contestation and conflict. The book also clearly informs the readers that existing cooperative arrangements do not guarantee the end of water disputes in South Asia transboundary rivers. Overall, this is a fascinating and engaging book that will be useful for researchers, academicians and water professionnals working in the region and elsewhere on South Asian river basins.