Strength from the waters: A history of indigenous mobilization in Northwest Mexico (Mestaz, 2022) 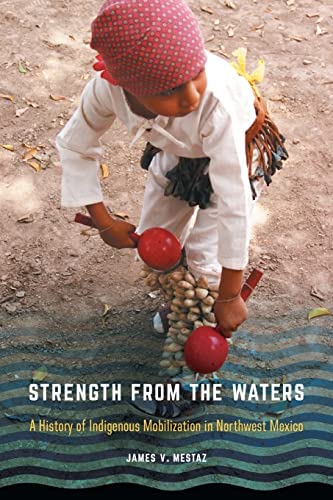 To cite this Review: Hoogesteger, J. 2022. Review of “Strength from the waters: A history of indigenous mobilization in Northwest Mexico”, University of Nebraska Press 2022, by James V Mestaz, Water Alternatives,  https://www.water-alternatives.org/index.php/boh/item/323-mayo

This book reviews the development of the Fuerte River Basin in the state of Sinaloa in north-western Mexico between 1920 and the 1970s. The analysis focuses on communities of the Indigenous Mayo people and their changing relation to the waters of the Fuerte River. It shows how the Mayo people struggles to access water shaped their identity, alliances, negotiations and conflicts at both local and regional level. This historical study is based on existing literature on the region, historical archives and testimonies of elderly members of the different Mayo communities that were analysed.

The book starts analysing the struggles for land and water of the Mayo people in the aftermath of the Mexican Revolution that ended in 1917. This resulted in the creation of ejidos (communal land) through which many Mayo and mixed (Yoreme (Mayo) - Yori (non-Mayo)) communities accessed first land and later irrigation water. The study shows the different strategies that Mayo communities used to access irrigation. These included creating alliances with well-connected non-mayo individuals, with large landowners, local landlords, as well as among and between different mayo, mixed, and non-mayo ejidos, reaching out to politicians at different levels (municipal, regional and national), and in some isolated cases mobilizations.

The study shows that governmental policies were never geared toward the indigenous as such, making the Mayo people, policy-wise, part of the broader peasantry. As in the rest of Mexico, from the mid-1930s to the mid-1940s, agrarian policies supported the peasantry. It is during this period that most communal lands (ejidos) in the Fuerte River Basin were created. They were created on lands that were expropriated from landlords and handed over to local communities. Once ejidos were established, water rights and infrastructure were. Peasants were given credit and technical support to engage in the production of sugar cane.

In the region, the Agricultural Society of the Collective Ejidal Interest (SICAE) was established in 1938 as a cooperative that would support, organize and empower the ejidatarios. It was foreseen to be a ‘benevolent organization that would minimize the volatility of sugarcane prices and make life easier for the crop’s growers’ (p.66). However, the SICAE also created conflicts within and among ejidos as irrigation and support was prioritized for members of SICAE at the detriment of non-members. This created conflicts within Mayo communities as not all producers were members of SICAE. Additionally SICAE maneuvered to control and manipulate decision making in ejidos by advancing its members to the directives and assemblies of the ejidos. As governmental policies shifted towards commercial production in the late 1940s, so did the priorities of SICAE that focused on lucrative sugarcane production to boost profits. However as internal management was plagued by corruption and benefits for members started to linger, more and more members left the SICAE. The SICAE was finally dissolved in 1956, leaving behind a Mayo community whose unity was fractured by the conflicts that had developed between SICAE members and non-members.

Water management in the basin was taken over by the Rio Fuerte Commission (RFC) in 1956; the same year that the large Miguel Hidalgo Dam was completed. The new infrastructure and extended irrigation network mostly benefitted large commercial farmers. In the years that followed, several ejidatarios and Mayo producers were slowly squeezed out of production due to a lack of governmental support, insecure irrigation rights and allocations, and adverse economic circumstances. As a result many small producers ended up renting or selling their land and water rights to commercial producers becoming once again poorly paid labourers tilling the lands of landlords. In this context the Mayo people sought new strategies to connect to water, the Fuerte River and each other. Their struggles shifted from access to water for irrigation to access to the river banks to conduct their cultural rituals in which the rivers stands central. As the river flow and water quality have severely deteriorated their struggles have also included ecological redress and recognition of their indigenous rights. Today efforts of the Mayo community are aimed at the recreation of their indigenous unity, identity and culture.

I enjoyed the historical analysis and detailed recount that this book presents. However, because several sections are based mainly on historical archives, formal letters and documentation of petitions and policy documents I missed details of the practices and on-the-ground strategies that the Mayo communities used to access irrigation water. In the last chapter and epilogue which draw more extensively on interviews and observations, it troubled me that what was said by the interviewed people is taken and presented as objective fact, instead of presenting it as what it is, the perceptions of the interviewed actors. The overall writing style is somewhat repetitive and at several points the arguments made are quite interpretative and suggestive rather than evidence-based. Finally the book does not engage much with theory which, from my perspective, is a missed chance. A better engagement with theory on, for instance, identity politics could have enriched the overall analysis and contribution of this research, while also opening avenues to make the results interesting for a broader audience of scholars.