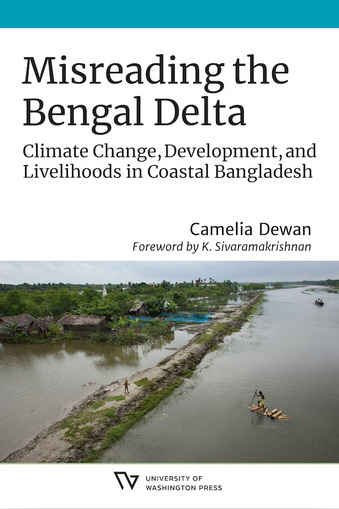 There is this saying by Schopenhauer that reading a book is thinking with somebody else’s mind. Or looking through the eyes of someone else. Camilia Dewan wrote a book that makes you think with a different mindset. She unveils a perspective on the Bengal delta that is both very intriguing and insightful. She doesn’t shy away from the badly needed discussions on the impacts of North-South development cooperation, and she is very willing to take firm standpoints in this discussion. Especially now that we all start talking about 'locally led adaptation', and 'increasing resilience of local communities' this book gives a jump-start to the thinking about the meaning of these words. The book sends a warning for careless applying of these labels to development cooperation projects. These labels tend to hide local complex, delicate balances, and seem to serve the donor community over the local communities.

My geo-hydro-physical understanding of the Bangladesh Delta has become enriched with a whole new storyline, with a whole new perspective added with a wide range of socio-economic and cultural elements. My understanding of development and the role the North plays in this discourse has thus been reshuffled. Camilia Dewan is telling a story about the role that the Climate Change narrative plays, in finding cause-effect relationships between water and land, inundations and livelihood.

The story weaves its way through the fact that there is no way to understand the delta of Bangladesh without understanding the delicate balance between culture, hydro-physics, history and local situation. Any attempt to talk about the situation without sufficient attention to this full set is deemed to fail. I think this message is not just specific to Bangladesh Delta, but all regions are the result of centuries long interactions between humans and environment. Trying to understand one part of this system means to uncover the delicate relationships at play.

The storyline forms around the construction of embankments and polders in the delta. The author takes an attempt to analyze the traditional differentiation in good floods versus the bad floods (borsha (annual monsoon rains), bonna (irregular destructive floods in the wake of cyclones, tidal surges, and storms) and jalabaddho (waterlogging, drainage congestion)), and the indigenous ideas about the benefits of borsha, the seasonal inundations. The inundations bring fresh silt to the land, keeping the land fertile. They flush the salt out of the system and control soil salinity. Only recently (that is: during the British rule) floods (traditionally perceived as a good omen) started to be looked at from an entirely negative perspective. This concept of negative floods was supported by a western-economic view on modernity, productivity and agriculture, a view that has become the dominant on development issues.

As a remedy against the flooding (now seen as something destructive), colonial powers, donors and experts alike began promoting the construction of permanent embankments. The embankments were envisioned to protect the land from flooding, but the dynamics in the system makes the embankments increasingly a source of environmental degradation. The author clearly explains the mechanisms that make the very construction of the embankments as one of the causes of environmental degradation, of silting up of the rivers, resulting with congested drainage. Thus, the solutions proposed by a naïve simplification finally result in a further degradation of the landscape and the livelihoods.

The author argues that the same mechanisms and naïve reasoning are still in place, this time with Climate Change as the main reason to continue on the pathways of labelling floods as entirely negative. Although far from a climate-change denier, the author warns for a too simplified narrative. She stresses that labeling Bangladesh as a prime victim of climate change will make development budgets available. But it is unclear whether such narratives actually address the causality of environmental degradation. The climate change logic relates to sea level rises and cyclones increase in frequencies and intensities, this will in turn, lead to devastating floods and increased salinity. The best way to protect Bangladeshis is (dubiously) to build larger embankments. But now that climate change is happening, and Bangladesh is a clear victim, a new narrative evolves- we should see the opportunities here. If we replace the traditional rice with salt-water shrimp farms, a good export product can be produced. What this logic fails to capture is how embankments aggravate the problems of water logging and salinity, as they interrupt the natural draining capacity of the area, and are the very reason of silting up of the channels in the area. Again, the author shows that this simplistic view leads to further degradation of the once fertile delta, and consequently destabilizes local livelihoods.

One uniqueness of the story is that it is told from both a very personal and a scientific perspective. Personal, because the author describes the situations, the real people, the emotions and ideas of real people she has met and worked with during her extensive stays in the region. Scientific, because the personal stories are related to the larger context of global north-south relations and international development cooperation.

Looking with somebody else’s eyes is a rewarding as well as a confusing experience. Thinking with someone else’s brain is as rewarding as it is confusing. It leaves the reader with the task of finding new balances from gained insights. Writer Camilia Dewan has been very commendably successful in creating that thirst in the readers.