Stemming the tide: Human rights and water policy in a neoliberal world (Baer, 2017) 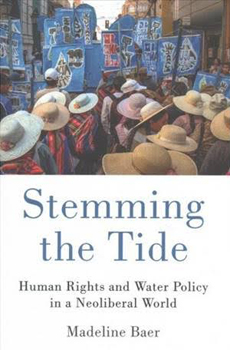 To cite this Review: Beck, A. 2018. Review of "Stemming the tide: Human rights and water policy in a neoliberal world", Oxford University Press, 2017, by M. Baer. Water Alternatives, http://www.water-alternatives.org/index.php/boh/item/4-baer

The water justice movement generally celebrates the year 2010 as a political breakthrough, as both the UN General Assembly and the UN Human Rights Council adopted resolutions on the human right to water and sanitation. The emerging recognition of this right and the attendant political struggles, both globally and on the ground in Latin America, have been at the heart of political scientist Madeline Baer’s research for several years. Her first book, Stemming the Tide: Human Rights and Water Policy in a Neoliberal World, provides insights into the ways in which the human right to water and sanitation is fulfilled in different contexts.

As Baer’s introductory chapters make clear, the rights-based approach to water and sanitation has been a well-minded area of research, and making an original contribution to this burgeoning body of work is not an easy task. The challenge Baer set for herself with this book is further compounded by her selection of case studies – Chile and Bolivia – as both have already been analysed in some depth by scholars such as Bakker (2010), Bauer (2004), Morgan (2011) and Nickson and Vargas (2002). As Baer acknowledges, Chile and Bolivia are two 'paradigmatic' cases in the water community: "Chile is the most fully privatized water sector in the developing world and a model for privatized utilities, and Bolivia is the birthplace and heart of the global movement against water privatization and for the [human right to water and sanitation]" (p.2). While Baer argues that her case studies offer original insights in that they serve as "a corrective to the romanticized vision of the Chilean and Bolivian experiences" (p.19), it would be worth noting that similar correctives have been provided elsewhere, for example in Morgan’s (2011) detailed book. Some of the empirical material presented in Baer’s two case study chapters – discussed further below – is by now well known among scholars of water governance.

Stemming the Tide nevertheless succeeds in providing a unique conceptual perspective. It does this by focusing on the 'mechanisms and pathways' that facilitate the implementation and fulfilment of the human right to water and sanitation. More specifically, the book is motivated by three research questions (p.2): "How is the human right to water and sanitation fulfilled in different contexts? Do neoliberal policies like privatization pose a threat to the fulfillment of the human right to water and sanitation? Does implementing a human rights-based approach to water and sanitation lead to meaningful social transformation"? To examine these questions Baer employs the 'moments of social transformation' model developed by sociologists Haglund and Stryker (2015). This model conceptualises ESC rights realisation as the result of three 'analytic moments': belief formation, action formation and transformation. In applying this model Baer relies on process tracing and data collected through fieldwork in Chile, Bolivia and at the 2009 World Water Forum in Istanbul. In addition, she draws on archival data and secondary sources, including water utility and government reports, newspaper stories and meeting minutes.

In the third chapter, Baer analyses the first moment of the social transformation model, 'belief formation', by tracing how water and sanitation came to be accepted as human rights in the global arena. Many water researchers and practitioners will likely be familiar with the 2010 UN resolutions on the human right to water and sanitation. However, Baer moves beyond the typical socio-legal accounts: she weaves her interview data together into a fascinating background story of the political struggles between 'rights promoters' and 'rights resisters' that led up to these pivotal resolutions. As Baer shows, civil society groups collaborated with 'rights-promoting states' (e.g. Bolivia, Germany and Spain) to achieve the legalisation of the human right to water and sanitation. Relying on mechanisms such as framing, moral and legal arguments, lobbying and advocacy, this coalition eventually carried the day at the UN, overcoming the opposition of 'rights-resisting' states, such as Canada, the UK and the US. The chapter also includes an account of how the water justice movement mobilised at the 2000, 2003, 2006, 2009 and 2012 World Water Forums to (unsuccessfully) pressure for the inclusion of human rights language in the final Ministerial Declarations. Tracing this struggle through the 2015 and 2018 World Water Forums could usefully extend and update Baer’s insightful narrative. With their consent, adding a comprehensive list of the interviewees as an appendix would be helpful in keeping track of Baer’s many informants.

In contrast, Baer characterises Bolivia as a "rights-affirming" case with an "anti-market policy orientation" (p.15). Chapter five begins by setting out the familiar history of the Cochabamba 'water war' and the failure of water privatisation in La Paz/El Alto. These events led Bolivia under president Morales to become a champion of the human right to water and sanitation, which was enshrined in the constitution in 2009. The Bolivian government has since demonstrated strong political will to implement this right by increasing investments in the water sector and creating new institutions and national development programmes. Thanks to initiatives such as the MiAgua programme, some progress has been made in the water and sanitation sector, leading Baer to suggest that Bolivia has achieved a 'moderate' level of fulfilment of the human right to water and sanitation in terms of access, quality and affordability . However, the Bolivian case also contains a warning: too strong a role for the state can undermine the broader dimension of the human right to water and sanitation. As state control over water management has been centralised under Morales, the autonomy of communities to self-manage their water systems has been eroded. As a result, some water users and activists in Bolivia have become sceptical of the human right to water and sanitation, describing it as a foreign concept that disregards indigenous notions of community management and the commons. As Baer summarises it, the case of Bolivia "reveals a tension between the need for a state role in urban water services and the dangers of subsuming community-led water systems under state control" (p.159).

After three detailed, empirical chapters – on global dynamics, Chile and Bolivia – Baer helpfully draws her insights together in a concluding chapter. This last chapter provides short summaries on each of Baer’s three main questions, spells out five hypotheses to guide future research and modifies Haglund and Stryker’s (2015) model by adding the moment of 'norm realization'. However, the conclusion is perhaps also where the book’s main shortcoming reveals itself most clearly. After finishing the book, most readers would probably agree that implementing the human right to water and sanitation is a complex undertaking, highly context-dependent and affected by a range of factors, including political will, state capacity, citizen participation and pro- or anti-market policy orientation. Yet, identifying how specific factors play out in the implementation of the human right to water and sanitation, and how they might interact to explain implementation success or failure, is not straightforward based on Baer’s case studies. Take the example of political will: its lack seems to be inconsequential in Chile, but political will arguably plays a considerable role in the Bolivian context. State capacity, meanwhile, is the decisive factor in Chile and also somewhat important in Bolivia, but too much or the wrong kind of state capacity can hinder implementation. Further, citizen participation, in Baer’s account, seems to be a predictor variable and part of the outcome at the same time.

Of course, Baer indicates that she seeks to explore the complex interplay of different dimensions of ESC rights implementation through "heuristic case studies" (p.16), and this is precisely what the book achieves. But since the overall purpose of the book is theory building, the concluding chapter could have gone a step further. Instead of presenting her findings as several interrelated but ultimately separate hypotheses, Baer could have developed a new theoretical model that would bring these hypotheses together in an integrated way to explain how the human right to water and sanitation moves from 'action formation' to 'norm realization’ and, finally, 'transformation'. Carefully selected case studies will be critical in testing such a model (or any of the proposed hypotheses) in future research. The question of why the human right to water and sanitation broadly defined appears much harder to implement than the narrow conceptualisation also merits attention. Well-structured and engaging throughout, Stemming the Tide lays the groundwork for further theory testing and development, demonstrating that research opportunities on the human right to water and sanitation are far from exhausted.

Morgan, B. 2011. Water on tap: Rights and regulation in the transnational governance of urban water services. Cambridge and New York: Cambridge University Press.

Nickson, A. and Vargas, C. 2002. The limitations of water regulation: The failure of the Cochabamba concession in Bolivia. Bulletin of Latin American Research 21(1): 99-120.

Perreault, T. 2014. What kind of governance for what kind of equity? Towards a theorization of justice in water governance. Water International 39(2): 233-245.