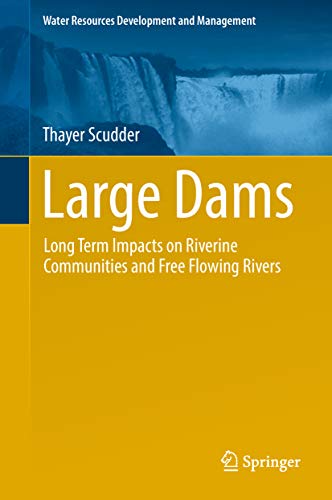 Thayer (“Ted”) Scudder is an anthropologist who has done more than any single person to help us understand the social and environmental impacts of constructing large dams, especially the impacts on those forced to move and resettle. This book is not a standard academic analysis of those impacts. Instead it is a personalized discussion of his life and 60-year professional career, and how and why his views evolved from being optimistic about the developmental benefits of large dams to being pessimistic and opposed.

Chapter 1 is overview of his research and consulting experience, and the evolution of his views. Chapter 2 covers the period 1956-1975 in detail, when he conducted detailed ethnographic research for his PhD dissertation on the Gwembe Tonga, who were being involuntarily resettled to make way for the Kariba Dam in present-day Zambia. The chapter provides an account of his early academic career. Through serendipity, he got the opportunity to work with Elizabeth Colson from the beginning of his career: she was a leading applied anthropologist and his mentor. He also had opportunities to work in other basins where people were being forced to move (Aswan in Egypt, Kainji in Nigeria, and Kossou in Cote d’Ivoire) and to re-study what had happened to the Gwembe Tonga (he continued periodically engaging with these people).

Chapter 2 covers 1976-1995, when he and two partners established the Institute for Development Anthropology (IDA). Here we gain insights into the challenges of working with donor and international agencies (the United States Agency for International Development, World Bank, and several United Nations agencies) whose priorities and agendas can change rapidly and are not necessarily focused on the wellbeing of those displaced. IDA offered Ted and his colleagues opportunities to obtain support to carry out important applied research on a wide range of related topics, including work in additional sites of large dams: Mahaweli in Sri Lanka (which is where I met Ted), Sardar Sarovar in India, the Senegal River Basin, and the Okavango Delta (where he and his team convinced the government of Botswana not to proceed with a major dam). He also had some engagement with China on the Three Gorges Dam at its early stage, and on China’s dam plans on the Mekong River.

Chapter 4 discusses his “increasing disillusionment” with the process of planning, implementing, monitoring and evaluating large dam projects, illustrated by his experiences with the World Bank. This chapter recounts his experiences on Bank Panels of Experts for dams (growing concern), and the World Commission on Dams (very positive). It describes in detail how his experiences forced him to change his previously positive views (which continued, with some caveats as a member of the Dam Commission) to opposition to constructing large dams. Chapter 5 is a very short summary of the evolution of his views, based on four specific experiences: his membership of the World Commission on Dams (1998-2000); preparation of a book on the Future of Large Dams (Scudder, 2005); his reading of a statistical analysis of the impacts of 245 large dams (Ansar et al., 2014); and writing a chapter (Scudder, 2017) for the Oxford Handbook of Megaproject Management entitled “The Good Dam: Does it Exist, All Things Considered?” (he concludes it does not). Finally, Chapter 6 is a postscript – a personalized description of his early life.

I met Ted several times in the late 1980s when he was conducting annual rapid assessments of the impact of the Mahaweli Development Project on settlers in the new irrigated rice systems being created. (I was then at the International Irrigation Management Institute, now IWMI.) He visited six times between 1979 and 1989, and I recall that his findings were raising increasingly serious issues as to the wellbeing of settlers (our research also showed they were not prospering). For most of this period, he was able to meet the Minister in charge as well as the President to share his findings, though it is not clear how they used his insights. When a new President was elected in 1989, a rival of the Mahaweli Minister, political priorities changed even though Mahaweli remained the country’s most important development project. I met Ted again when he came to Sri Lanka as part of his work on the World Commission on Dams.

Despite the title, this book is not a detailed analysis of the long-term impacts of large dams – though one does find a lot of insights from the cases he describes. Its real value has two dimensions. One is to understand how the views of a highly skilled and committed applied social scientist evolved over time, as he gained more experience with international financing agencies and more data from the projects with which he was associated. The other is to gain an understanding of the challenges of working with large bureaucratic development agencies whose priorities and world view drive what he now calls “a dysfunctional international development paradigm” (p. 17), of which large dams are a major component.

As I understand the evolution of his thinking, it is not that large dams have no potential to make significant developmental contributions. This potential drove Ted’s positive views initially. Rather, the problem is that such projects are never sufficiently well planned, managed and financed to realize their full potential while also minimizing the negative social and environmental impacts. A major reason is the very complexity of such projects: it is simply not possible to anticipate all that happens (Ted is apparently not a fan of Hirschman’s (1967) concept of “The Hiding Hand”). But an even more important reason is that neither governments nor international finance institutions are prepared to remain committed over a sufficient time to achieve the potential and manage externalities. Further, they often have priorities that are antithetical to the interests of displaced populations and the downstream people whose livelihoods are disrupted. For example, the World Bank has declined to consider displaced people as “beneficiaries”. Rather, they are a problem to be managed to minimize adverse effects (and even this is rarely well-managed). Finally, he is very critical of the unwillingness of governments and financing agencies to invest in long-term monitoring and impact assessment: even today, we do not have good long-term data on socio-economic and environmental impacts of any major dam projects.

I gained an impression that Ted is disappointed by the results of his 60 years of engagement in tackling complex development issues. But my view is different: it is as a result of his intellectual honesty and persistence over this long period that we now know so much about the likely unintended consequences of major development projects, such as construction of large dams. His criticism of the World Bank’s rejection of the findings of the World Commission on Dams is spot on.

I enjoyed reading this book, despite the poor editing (for example mismatches of references to figures and figure numbers). For a reader more interested in understanding the social, environmental, financial and political costs of constructing large dams, I would advise reading his 2005 book and 2017 chapter. But a reader who wants to gain insights into how and why the views of a major contributor to research on large dams changed, or wants to have a better understanding of the challenges social scientists face in trying to influence the investments of large development organizations, should read this book.

Scudder, T. 2017. The good dam: Does it exist, all things considered? Chapter 9 in Flyvbjerg, B. (Ed.), The Oxford handbook of megaproject management. Oxford: Oxford University Press.