High and dry: Meeting the challenges of the world’s growing dependence on groundwater (Alley and Alley, 2017) 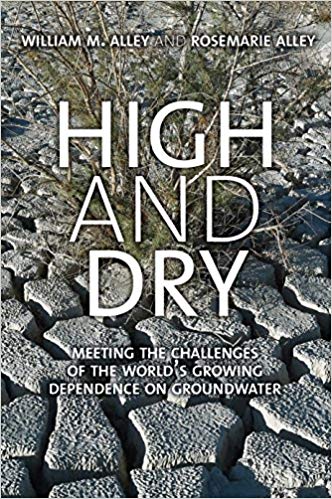 To cite this Review: Closas, A. 2019. Review of "High and dry: Meeting the challenges of the world’s growing dependence on groundwater", Yale University Press, 2017, by Alley, W.M., and Alley, R., Water Alternatives, http://www.water-alternatives.org/index.php/boh/item/45-h-d

The story of groundwater is a tricky one to tell. First of all, because it is hard to comprehend as it is not easily seen with the naked eye. Apart from bubbling springs or in water ponds, groundwater exists deeper within the earth’s core and remains out of sight and out of mind as it crosses and interacts with geological layers beneath our feet. Its occurrence and timing are often measured in centuries or millennia, timeframes often too long to fathom in our impatient modern lives. Even when it is visible, surfacing in wetlands or feeding into rivers as baseflow, the un-experienced eye would only see surface water trickling down. And yet, groundwater meddles with hydrological, environmental and geological processes (Nature Geoscience, 2016). The fact that groundwater represents the largest component of the water cycle makes it essential to better manage and protect our water resources globally.

Around our globe, for many communities, groundwater represents the difference between water security and insecurity, access to water supply or not, food security and livelihoods. Against this backdrop, the premise of this book is a laudable one: a general and global overview of groundwater and its challenges aimed at a non-expert audience. Groundwater science and management are made accessible but at a cost as authors leave aside the granularity of the variegated groundwater realities of users on the ground. The global approach of the book fades in and out as the authors focus more on North American examples. Even though the challenges affecting groundwater are global, specific local problems demand context as local differences in communities need to be highlighted and differentiated.

Such lack of granularity can also produce generalisations and simplifications. This is seen for example in the account of India’s groundwater problems given in Chapter 2 where some key details are obviated such as the fact that half of India uses diesel pumps while the other half uses electricity at subsidized prices to power pumps (Mukherji, 2007). The sole focus on electricity in the chapter misses half of the story as the regulatory reality and management challenges will differ for each of the two sides of the groundwater-energy nexus in India.

The general and educational tone of the book also brings a lack of substantiation to some of the examples, making it hard for the reader to understand the messages that the authors want to convey with the selected examples. Along the book, the use of different examples appears erratic at times as no clear narrative or analysis emerges from them. Interesting ideas are brought in such as the lack of oversight of development projects (page 58), but no further clarification is provided. The examples would be more illustrative if further analysis was derived. Technology solutions (e.g. the GRACE satellite initiative to map groundwater depletion mentioned in p.14) are mentioned in the text without much context or explanation. It could be said that a certain level of general claims in an educational book is normal and can be understood, however, here they can undermine some of the contributions made by the authors. For some of the examples, the lack of contrasted evidence makes some of the claims dubious, such as the Libyan examples and how it "clearly improved people’s lives" (p.76), especially if the claim comes from a spokesperson from the project.

In terms of structure, the first part of the book (Chapters 1 to 4) seems to obviate any scientific reference to the basic fundamentals of groundwater science (e.g. groundwater characteristics, its occurrence, groundwater flows, etc.). This issue drags along and becomes more than distracting as no reference to any biophysical dynamics appears until Chapter 5. The statement found in Chapter 3 on p.33, "groundwater and surface water are dynamically connected" is provided without further context, potentially leaving the reader puzzled. The existing connection between groundwater and surface water is undeniable but it would seem that such relationship is taken for granted until much later in the text.

The prevalence of examples from the USA focusing on surface water (e.g. Chapter 3 on Arizona) adds to this perception for the reader as groundwater becomes almost anecdotal at times. There is certainly a connection between the Colorado River compact (the 1922 agreement between 7 states governing the allocation of water from the river) and groundwater, but it is not clearly articulated and presented. At the same time, the political insights of water management in Arizona remain interesting and detailed, adding flavour to these examples. Both authors speak from a privileged position within the United States of America (USA) groundwater management establishment and this can be seen by the level of detail provided in the political accounts of water management.

By Chapter 5 the book gains coherence as the authors begin to engage with the subject of groundwater science and the relevant contribution of the following chapters can be appropriately assessed. Given their scientific background, the authors become more at ease with the science and navigate complex hydrogeological concepts such as recharge, baseflow, and hydraulic gradient with finesse, making them accessible and easily understood. This is felt in Chapter 5 to Chapter 9. The familiarity and the tone used by the authors is relatable and insightful and enough details are included to make the reader feel comfortable.

Groundwater quality is given a prominent place in this book: a relevant contribution that deserves a mention. Dedicating almost 5 chapters to these issues is a commendable effort as groundwater quality is often relegated behind groundwater quantity. Albeit relevant, these last chapters feel rushed: what are the lessons that one can draw from this review? What do we do to further prevent groundwater contamination? What is the role of government and regulation? Some solutions are provided in Chapter 11 on how to tackle groundwater pollution. However, technology-based solutions can sometimes amount to bandages whereas additional socio-political or economic issues sitting at the core of these problems remain un-addressed. Chapter 14 provides a concise and detailed review of the main issues involved with groundwater and fracking, especially linked to water quality and the various environmental impacts of fracking operations but the lack of analysis and conclusive points leaves the reader wanting more.

To conclude, it is hard to make hydrogeology interesting for the un-initiated, so any book attempting to do that is to be welcomed. This book remains a relevant contribution to make groundwater more approachable and understandable. However, despite the global occurrence of groundwater, many management decisions and solutions rely on very localised issues and dynamics. Issues of intergenerational equity and community-based management are extremely relevant for groundwater management at the local level, but they are introduced without further explanation in Chapter 17. Governance is only mentioned twice in p.139 and again in Chapter 17 (p.245), while it remains a fundamental concept of improved groundwater use and sustainable management. What lies at the core of the issues pertaining to groundwater is ultimately a choice: what type of societal development and growth do we want in the future. For this change to be effective and accepted, major governance shifts will have to occur. The book finishes on a gloomy echo of Jared Diamond’s study of ecocide in collapsed ancient civilizations. The tone is grave but appropriate as this is the nature of the challenges faced in a world of constant anthropogenic change. Much more science, commitment and action are needed. Mentalities also need to change and books like this one can help.

Mukherji, A. 2007. The energy-irrigation nexus and its impact on groundwater markets in eastern Indo-Gangetic basin: Evidence from West Bengal, India. Energy Policy 35(12): 6413-6430.