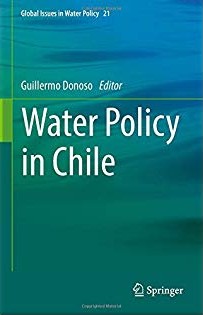 The case of Chile is well known in international water policy circles, particularly as a controversial example of water markets and privatised water rights. The ‘Chilean model’ refers to a fairly extreme, free-market approach to water rights, with few public obligations and a weak governmental role in managing water uses. In the 1990s-2000s the World Bank was a vocal proponent of the Chilean model as a policy reform for other countries to follow, although in recent years the Bank has been more balanced and critical.

Hence there should be a wide readership interested in Guillermo Donoso’s new edited book, Water Policy in Chile, which offers a “self-contained interdisciplinary overview” by Chilean water experts to English-language readers (p.1). There are 14 chapters by 18 authors, 17 of them Chilean. The authors represent different fields and professional trajectories and include academics, government officials (past and present) and private consultants. Donoso himself is an internationally connected water economist at Chile’s Catholic University. In addition to editing this book he is one of the editors of the Springer book series in which it appears, Global Issues in Water Policy. In short, Water Policy in Chile was written by local insiders for an international audience.

For readers of Water Alternatives, the book’s most striking feature is this: although the chapters have a lot of useful information about Chilean water resources, laws and policies, they are silent about political or political-economic context. The silence is so noticeable that it must reflect an editorial decision, either in selecting authors or in defining their common approach. The book’s basic structure consists of four parts and is easy to follow. After an introduction by the editor (Chapter 1), three background chapters describe hydrologic, water quality and socioeconomic information (part I, Chapters 2-4). Four chapters then focus on different aspects of water policy: law, water quality, environmental flows and water markets (part II, Chapters 5-8). Four more chapters focus on specific sectors of water use: urban, rural, irrigated agriculture and mining (part III, Chapters 9-12). Finally, two synthesis chapters conclude (part IV, Chapters 13-14). While the chapters vary somewhat in quality, they share an emphasis on detailed description rather than analysis. Good description is an essential part of an overview book. In this case, however, few of the authors build on their description with an evaluation or critique.

How much can foreign readers understand about a country’s water policy problems without knowing something about political and economic context? Throughout the book the authors avoid explicit commentary or analysis about politics as they present water policy issues in technical and bureaucratic terms. Some of the authors write in a political code that would be understood by other Chilean insiders but probably not by most readers of this book, who will likely not know enough about Chilean politics or recent history to be able to read between the lines. So the book’s implicit argument (or premise?) is that water policy problems can be usefully described and understood without discussing the political-economic context.

I will illustrate the general tendency with two examples. In Chapter 4 on socioeconomic context, in a section summarising the “policy environment for water rights markets”, Gustavo Anríquez and Oscar Melo describe Chile’s previous, state-centred Water Code of 1967 as reflecting “a change in the macroeconomic and political context towards a more centralised political system”. By this they mean the reformist, centre-left, elected government of President Eduardo Frei Montalva and the Christian Democratic party (1964-1970), which intervened strongly in the national economy and in the agricultural sector, including a major agricultural land reform (which was defined in the same 1967 law that included the Water Code). The next elected government, of President Salvador Allende and a left-wing coalition (1970-1973), moved sharply to the left and increased state intervention in the economy, until right-wing opposition led to a military coup, and a dictatorship that stayed in power more than 16 years. Anríquez and Melo refer vaguely to this history as “the political changes that took place in Chile in 1973”, without noting that the military regime was far more politically centralised than its predecessors. The regime’s political power allowed it to change the country’s “economic paradigm … to one where the market is responsible for the efficient allocation of resources. The authorities and ministers of the time who managed the country’s economy provided the guidelines to draw up a new Water Code”, which favoured a free-market approach to water management (p.61).

The authors’ statements are not incorrect, but they leave out all the political and economic conflict from a historically intense period in Chile. In the 1960s-1980s Chile was an internationally symbolic example of conflicting political and economic ideologies, changing from democratic and state-centred to authoritarian and free-market. After 1990 Chile became an internationally symbolic example of peaceful democratic transition in the context of a market economy. This background is missing from the book, apparently assuming that the reader either already knows it or doesn’t need to know it.

Another example is in Chapter 5 on legal and institutional framework by Alejandro Vergara and Daniela Rivera. They emphasise the importance of the “normative trilogy” of three water laws adopted in 1979-1981: a brief decree-law, a new Constitution and a new Water Code (pp.67-77). The authors describe the three laws in neutral, legal and technical terms, without mentioning that all three laws were approved by the military regime during its most foundational period, when institutionalising its radical legal, economic and ideological changes for the nation’s long-term future. The rest of Vergara and Rivera’s chapter is a good legal overview and summary, but they are presenting a neutered version of the Chilean water rights story to foreign readers as if there were no political connotations. The authors do not discuss the reform of the Water Code in 2005, apart from a few passing comments, or the political debate since then about pushing the reform further (see below).

The strongest chapters, in my view, are in part II (Chapter 5, mentioned above, Chapter 7 on environmental flow policy by Francisco Riestra and Chapter 8 on water markets by Robert Hearne), Chapter 9 on urban water management by María Molinos-Senante, and Humberto Peña’s assessment of the weaknesses and strengths of integrated water resource management in Chile (Chapter 13). These chapters are rich and informative. Other chapters follow a pattern of describing different laws and policies as they are written on paper, with little evidence or discussion about how they are implemented in practice. For example, in Chapter 6 on water quality policy, Oscar Melo and Javiera Perez describe the relevant laws and regulations in detail, without evaluation or commentary, and then in their conclusions mention “significant water quality problems and challenges”, without analysing them further (p.101).

Perhaps the best indication of the book’s resolutely non-political analysis is the fact that no chapter systematically addresses Chile’s long public debate about reforming the Water Code and hence the current water model. This debate began soon after 1990, when Chile returned to elected civilian government after 16 years of military rule. Three successive Chilean administrations proposed legal reforms that would increase some government restrictions on private water rights – essentially trying to reduce the model’s free-market emphasis. Political debate in the Chilean Congress dragged on in stalemate for nearly 15 years, with polarising rhetoric and newspaper headlines, until a weak reform was finally approved in 2005. The reform slightly increased government authority over water use. The most important change was to charge an annual fee to anyone who owned new water rights without using them, especially for hydroelectric power development, as an incentive to reduce speculation. Soon afterwards a nation-wide social and political movement emerged to demand much deeper changes to the Water Code: to reverse its neoliberal essence and assert more public ownership and government control. That movement is still alive and kicking ten years later, well represented in the Chilean Congress. This political debate in Chile has often been heated and ideological, through alternating governments of different political coalitions. To date the stalemate continues and reform has been blocked, which is a victory for the status quo. These topics, however, are not covered in Donoso’s book.

In short, this book offers the English-language reader a lot of information on the surface. The deeper arguments and insights are harder to find.