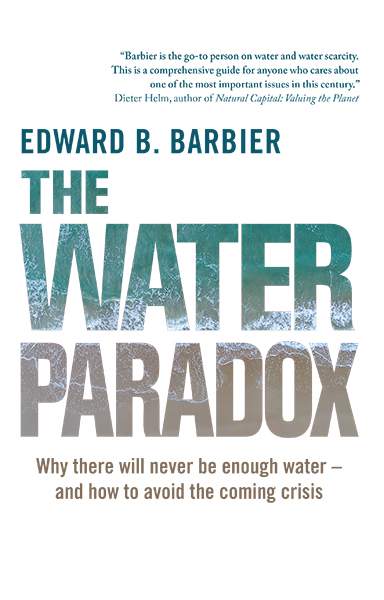 Vaguely intrigued by the title, and the promise to learn "how to avoid the coming [water] crisis", I set out to read The Water Paradox without much idea of its scope but expecting a comprehensive investigation of the world's water woes.

The "paradox" proposed for discussion is framed as follows: "with overwhelming scientific evidence pointing to growing overuse and scarcity of freshwater, why did the world not mobilize its vast wealth, ingenuity and institutions to avert this crisis?" This is clearly a crucial question that can safely be extended to other issues, such as global warming and poverty, or to the wider consideration of why humankind has historically proven to be so inept at averting impending catastrophes.

The reader's first surprise is that the book fails to come to grips with this, albeit complex, question. The only explanation given is that "the institutions, incentives and innovations of today's economies are geared towards expanding our command and control of water", as they were in the twentieth century, and are thus "incapable of reducing use as economies develop and populations grow". There is undoubtedly some truth to this statement, leading the reader to expect some attention to the promised 'why', that is, an exploration of the paradox: why are these institutions so sticky? Why is the 'hydraulic mission' alive and well? Why do we have $480 billion of subsidies to agriculture each year if this is such a bad thing? Why can groundwater overabstraction not be curbed if the solutions are already known? The political dimension of water management is almost totally absent here, as if irrelevant and economic orthodoxy could prevail alone on its own virtue. Avoiding such considerations, the focus is instead on solutions to the paradox and the water crisis: pricing water at its scarcity value and allowing water to be traded will dissolve all the contradictions inherited from a history of careless water resource development. Economic rationality is presented as a silver bullet that is uncontroversial and, apparently, does not have to explain how it can deal with 'mundane' issues like equity in allocation, environmental sustainability, poverty alleviation, political trade-offs, sharp asymmetries between the factor endowments of family and corporate farming, or rich and developing countries, as a few examples. The only metrics of sound water use in society is water productivity and allocation to higher value-uses as permitted by market mechanisms.

The second surprise is that the solution is only framed in terms of institutions (e.g. for basin-level water management), economic tools and innovations, among which pricing and markets receive by far the bulk of the attention. Tellingly, the cause of our woes is "inadequate and poor management" – a narrower view than the now commonplace statement that it is all about "poor governance". The way forward is indeed clearly framed as a provision of recipes by (economic) experts, with some addition of welcome technological innovations (including desalination despite this solution clearly coming under the reviled 'hydraulic mission'). The huge and growing academic discussion of water governance – i.e. how water-related collective decisions are, or should be, made – is squarely absent from the analysis of our "water crisis" and its solutions.

The third surprise is that even for those who are ready to accept, out of disciplinary conviction or otherwise, that prices do matter and market mechanisms may have value in particular settings, the lack of nuance in the discussion is puzzling. The argument is redolent of the 1990s, and more specifically the 1993-2003 decade, when economic tools were branded the cornerstone of a new gospel aptly termed the 'Kyoto consensus' by Merrett. The demise of this policy bubble, in particular due to internal debate within the World Bank and its 2003 Water Policy Strategy that restored a sense of measure, the elusive uptake of the theoretical concept of 'full-cost pricing' (e.g. Rogers et al.'s GWP background paper), the yawning gap between the enthusiastic adoption of such key principles in the 2000 European Water Framework Directive and the reality twenty years later, should surely have inspired further discussion on the scope and limitations of purely economic policy tools. Situations requiring different treatment are often conflated or inadequately nuanced, for instance, urban and agricultural water use, physical and economic efficiency, charging for O&M cost-recovery or attempting to change behaviour, predominantly rainfed vs irrigated agriculture, and most importantly water withdrawals and consumption. Oddly enough, this last distinction, probably the most important aspect of managing water in water-scarce basins and one that defeats a lot of 'good ideas' aimed at saving water, is just not there. Only withdrawals matter, ignoring the complexities of the water cycle that makes water a different beast. The central mantra is that "at the heart of the crisis is persistent under-pricing – the failure to treat water as an economic good". Pricing water would save the day, but the unfortunately demanding conditions where this is both desirable and possible are not discussed. Does it matter that individual water use in the overwhelming majority of irrigated schemes in the world is not known volumetrically and is not on-demand? Does it matter that farmers in water-short basins or systems are unlikely to waste water when they receive far less than they need? That saving water, more often than not, actually means curtailing the resource of return flow appropriators (and increasingly so as the basin closes and tension over resources mounts)? Does it matter that water prices high enough to influence behaviour almost invariably represent an unacceptable loss of income? Or that 'encouragement' to grow higher-value crops favours capital-intensive agriculture that is able to deal with market vagaries while small farmers are crowded off? Such questions are not asked.

This is a very readable book that makes a laudable effort to be accessible to a large public. Yet, notwithstanding (short) additions on "water grabbing" and perhaps transboundary management, it could have been written 25 years ago, rehearsing as it does the thinking that gained currency at that time, with no further qualifications derived from our experience since then. To treat water as an economic good is certainly important, but to assess societal tradeoffs with the other two pillars of IWRM is far more complex than just proposing to restore economic orthodoxy through pricing and markets.