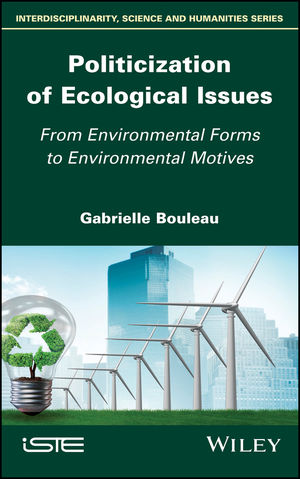 In a book that is both theoretically ambitious and empirically richly detailed, Gabrielle Bouleau analyzes the politicization of ecological issues by highlighting how much of this process is shaped by sensorial perceptions: sight, hearing, touch or smell. Her contribution is based on the concept of motive. Derived from the French word “motif”, a motive is a suggestive form – a trout in a pristine water, a dying fish, a polluting megacity- that conveys a motivation to act. It is a perception that embeds an evaluation –positive or negative- of the thing perceived.

By fusing emotions and cognition, motives can help politicize the environment according to their materiality, spatiality, and temporality. Their materiality, or vividness, makes them particularly evocative and accessible to non-experts (p. 81). Their spatiality –the perceived and imagined territory they cover- can destabilize pre-existing political territories and their associated political authorities. Finally, disruptive motives that change from one season to the next –say, an oil spill or a sudden burst of blue-green algae on a coastline- will be more conducive to politicization than a slow moving, barely noticeable deterioration (p. 82).

Moreover, environmental motives have unequal politicizing potential depending on the dominant ontology they have been endowed with. Here, Gabrielle Bouleau makes use of Virginie Tournay’s work on the various perceptual and emotional relationships that social actors maintain with institutions, a work that combines Philippe Descola’s ontologies with Charles Tilly’s explanatory registers. Thus, motives imbued with a naturalistic ontology are attributed to an external cause –a malevolent actor, a perverse structure, a process- that can be acted upon and changed. They are, therefore, the most effective vehicles for politicization. By contrast, motives conveying ontologies that are either animist –i.e. sites of reciprocal obligations-, totemic –based on shared identity and belonging- or analogical –defined by forward-looking, action-oriented narratives- are inherently more consensual. They are therefore –all else being equal- less conducive to politicization, even though they can induce some changes in environmental policies as well (p. 18-20). Furthermore, some motives are inherently ambivalent in that they convey more than one ontology.

The author is careful not to ascribe overly deterministic effects to motives. In her view, motives are best considered as a bundle of resources with which political actors operate in often unpredictable ways: “Like a sculptor who will not work in the same way with a block of granite and a block of clay, political work adjusts to the consistency of the instituted environmental motives” (p. 79). In other words, motives facilitate or constrain actors’ rhetoric and strategies but do not automatically confer an irreversible advantage to any one of them.

Gabrielle Bouleau puts her theoretical framework to work on two case studies: the long-term changes in freshwater quality control in Europe; and the different allocation of subsidies by two French river basin organizations. She also builds on her theoretical apparatus to capture the scope of ongoing disagreements in academia over the causes and seriousness of the current ecological crisis and its possible remedies.

Chapter 3 traces the rise and fall of six different motives over two centuries: the sacrificed river, the self-purifying river, fish mortality, trout, migratory fish and eutrophication. It shows how the evolution of key policy instruments for monitoring freshwater quality has been closely associated with changes in dominant river motives. Motives, then, make it possible to distinguish minor changes from major ones in policy instrumentation, as not every new instrument signals a corresponding change in the underlying environmental motive (p. 88).

Whereas chapter 3 is concerned with changes in motives over time, chapter 4 takes a more synchronic look at motives. It compares the allocation of subsidies in two river basin organizations. The puzzle is to explain why one agency (Seine Normandie) is careful to ensure that water users receive benefits commensurate to the fees they pay (principle of fair return); while the other agency (Rhône Méditerranée Corse) conceives its subsidies as a way to compensate for inequalities in access to water and to incentivize ecologically beneficial actions. Part of the answer, she shows, lies in the institutionalization, over time, of a 'totemic' Rhône River motive that stresses the shared identity of its users and the imperative of solidarity between them.

Finally, Gabrielle Bouleau shows how competing theories of social-environmental change in academia (ecomodernism, ecological modernization, sustainable development and ecosocialism) are based not only on different values and causal statements, but also on different environmental motives: these approaches literally do not see the same thing in the environment.

Overall, the author succeeds in what was certainly her primary objective: establishing the notion of motive as a promising way to bring sensorial perceptions back in the study of environmental politics and policies. She rightly notes that in mainstream political science and political sociology, sensorial perceptions are either amalgamated with representations or ignored altogether (p. 15). It is not surprising, therefore, that she had to turn to anthropology (especially Philippe Descola’s work on ontologies) to give them prominence. She makes a convincing case for distinguishing perceptions from systems of meaning, certainly not in order to treat each of them in isolation but, on the contrary, to explore how they mutually shape each other: how they can strengthen, destabilize or change each other depending on circumstances. In doing so, motives convey the idea that framing and sense making do not arise independently from the material environment and the sensorial perceptions it affords. In this sense, both our perceptions and representations are “socionatural” (p. 13). The attention given to perceptions, and to the emotions they cause, sets motives apart from alternative notions such as policy paradigms, narratives or “deep cores” of beliefs.

The author also shows that motives are important resources to forge and expand political alliances, especially by including non-experts. Thus, the dead fish motive will rally more social groups than overfishing, a largely invisible phenomenon. For those willing to politicize the whole Earth in the age of the Anthropocene, or to question capitalism as a basic set of social relations for its adverse effects on the environment, this will come as an invitation to reflect on the images and on the “suggestive forms” best suited to doing so.

However, the book also raises a few important questions.

First, even though established motives are defined as social institutions, the author’s pragmatist bent leads her to pay much more attention to motives as resources and objects of conflicts than to motives as constraints. Even though she asserts that motives invisibilize as much as they render visible, she never fully shows how an institutionalized motive becomes internalized, taken for granted, and how it sets limits to those willing to challenge it. In fact, the author regularly expresses reservations about the long-term causal role of motives. For example, she states that “the greening of the water quality control policy in France was due to other factors; the political work on motives only accompanied it” (p. 88). Motives, then, often appear as mere strategic justifications, easily malleable by creative actors, rather than as constraining grammars that preclude certain courses of action even as they help define winners and losers. Therefore, their status as social institutions (as opposed to mere political weapons) remains uncertain. More broadly, the lack of emphasis on the “cold” dimension of social life, despite intentions to the contrary, prevents her from measuring the depth of potentially structural, entrenched biases against emerging motives. Whether intentionally or not, the conception of political life conveyed throughout the book is one of remarkable pluralism.

Second, the definition of politics remains somewhat ambiguous. Gabrielle Bouleau broadly defines her study of politicization as an investigation into ‘how material forms observed in time and space are invested by social groups to become legitimate patterns of perceiving and categorizing the environment” (p. 21). This definition, however, leaves open the question of whether this process of legitimization is inherently conflictual or not. In short, and to borrow from Hugh Heclo’s old distinction, does she think politics is mostly about puzzling, with actors "collectively wondering what to do"? Or, rather, that it necessarily entails some powering as well, with mutual opposition and coercion at the forefront? The important mechanisms of politicization that she usefully distinguishes (most notably generalization and crystallization) do not clearly adjudicate between these conceptions. This matters because some of the types of the political work she describes (for example crystallization, p. 46) can be viewed as politicizing according to the former definition, but depoliticizing according to the latter (as it may produce broad consensus around the necessary recognition of an environmental singularity).

Finally, everything seems to indicate that motives pervade every field of public policy, not just environmental ones. It is easy to imagine them at work in urban policies, social policies or policies related to law and order. This is consonant with how pragmatic sociology, Luc Boltanski in particular, argues that perceptions of the “world” (as all that can unpredictably appear within the field of experience), can always destabilize “reality”, that is, established representations and conventions. Here, by insisting on the specificities of environmental policies, the author unduly restricts the scope of her argument. Instead, we might think of a comparative research agenda exploring how motives are formed, maintained and changed over time, and how they help shape policy outcomes in the long term. That such an agenda can be entertained is a testament to the book’s relevance. It will be of great interest to everyone interested in water policies and, much more broadly, in the sensorial and emotional dimensions of political life.