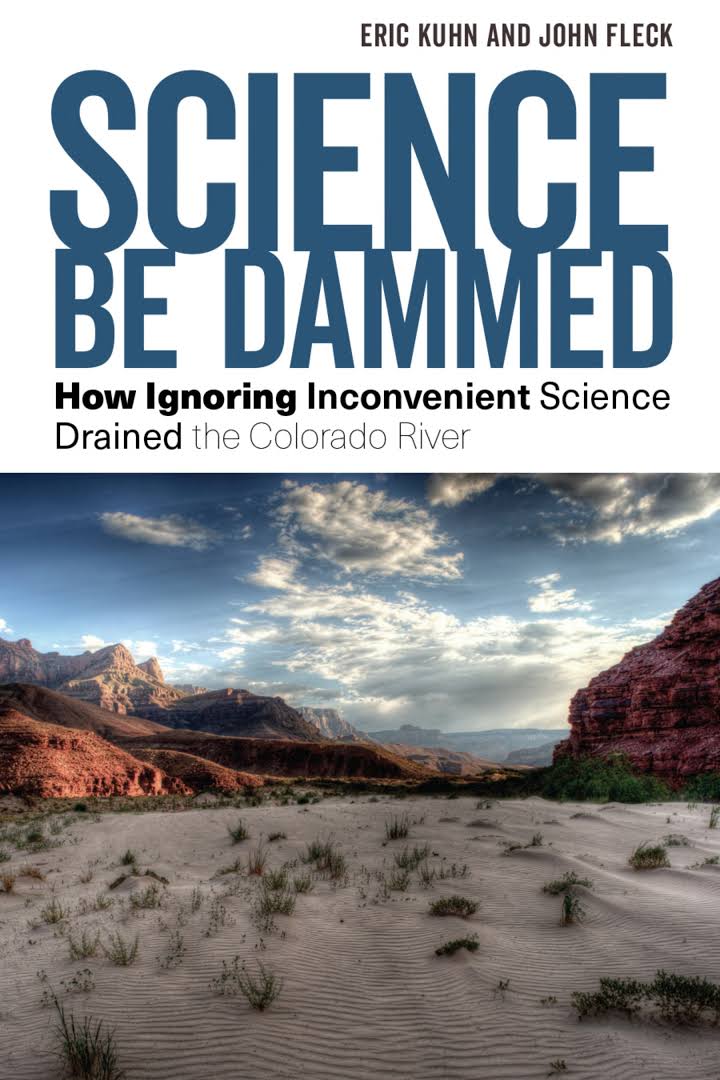 To cite this Review: Berggren, J. 2020. Review of "Science be dammed: how ignoring inconvenient science drained the Colorado River", The University of Arizona Press, 2019, by Eric Kuhn and John Fleck, Water Alternatives, http://www.water-alternatives.org/index.php/boh/item/96-science

There are countless Colorado River resources available to learn about the history of how the river has been and continues to be governed. Hundreds of books, reports, studies, and papers have been written on the subject. Accordingly, it takes something quite new and novel—and credible—to break through the masses and rival Colorado River classics such as Norris Hundley, Jr. and Marc Reisner’s work. Eric Kuhn and John Fleck have undoubtedly done exactly that in their new book Science Be Dammed: How Ignoring Inconvenient Science Drained the Colorado River.

In their book, Kuhn and Fleck take on the unenviable task of digging through countless congressional testimonies, government reports, scientific articles, news stories, and other documents from the decades leading up to the years that would decide how the Colorado River would be allocated, and in the decades since, to better understand exactly what negotiators were thinking and what information they had available in the early 20th century. Perhaps it is not too surprising these two would take on this project given the duo’s collective Colorado River experience and knowledge. Kuhn, former general manager of the Colorado River District in Colorado, knows more intimate details about the history of the river than most folks can possibly imagine, primarily from an insider’s perspective who was directly involved in countless Colorado River decision-making processes. And Fleck, a former long-time reporter and current academic, who has utilized his extensive journalistic experience to systematically and holistically examine how the river is managed from an outsider’s perspective.

What motivated Kuhn and Fleck was discontent with what has become today the most common reason given for why the river was over-allocated in the first place. If you have ever seen a talk or lecture about the Colorado River, you have almost certainly heard the refrain: when the negotiators divvied up the river in 1922, their period of record for streamflow was unusually high. They believed the river’s annual flow was at least 17.5 million acre-feet (MAF) and able to supply what the states could reasonably develop in the coming decades. Unfortunately, that 17.5 MAF ended up being much higher than the approximate 14 MAF we see today and because of that, they accidentally over-allocated the river.

But as Kuhn Fleck dug into the record, they discovered the reason for over-allocation was more complicated, nuanced, and ultimately political rather than scientific. As the authors’ note, in the years that followed the successful signing of the Colorado River Compact of 1922, the negotiators needed to convince lawmakers and the general public that the water they had divided up in the Compact would actually be available to users for the foreseeable future. Kuhn and Fleck discuss, in what becomes the crux of their analysis, that hydrologic realities and the best available science are only truly useful if they already conform to the hydrologic desires of water managers. What they had discovered was there were indeed several, credible scientific studies demonstrating the long-term average of the Colorado River was much lower than the 17.5 MAF, but these studies were misconstrued or ignored altogether by the Compact negotiators. One such study by the U.S. Geological Survey, published in 1916, found an estimate of Colorado River annual streamflow that was significantly less than what was allocated in the 1922 Compact. Good science was available but intentionally set aside as “… [the negotiators] efforts were more about winning political support for the deal than about shedding honest light on the Colorado River’s hydrology” (p. 59).

What becomes especially troubling is that Kuhn and Fleck continue to find this trend throughout the rest of the 20th century as further agreements were decided upon, water infrastructure projects were proposed and built, and we saw the continued evolution of Colorado River governance, known collectively as the “Law of the River.” Time and time again, the people making those decisions seemed to not be using all the available science. They seemed more interested in political expediency than credible information gathering. In discussing the most likely reason for this, Kuhn and Fleck write:

“The basic problem was neither the lack of good science nor the ability of the decision-makers to understand the basin’s hydrology. The decision-makers were in fact intelligent, accomplished, and skilled professionals. The problem was that in an era driven by politics of competition for a limited supply of river water and federal dollars, the decision-makers had the opportunity to selectively use the available science as a tool to sell their projects and vision for the river’s future to Congress and the general public” (p. 5).

Kuhn and Fleck conclude their book by noting that, while the fundamental questions of Colorado River management are the same today as they were 100 years ago (i.e., how much water is actually available now and in the future; what are the legitimate demands; how should the river be managed given uncertainty in future supplies and demands), what has changed is the development of complex relationships between those who have historically used the most water and those that need the water in the future. And this change has occurred on a river that today is fully utilized—there is not a drop left that is unaccounted for or allowed to reach the Colorado River Delta in the Gulf of California.

Kuhn and Fleck further note that what makes this especially problematic today is that the river is grappling with shortages, quite vulnerable to droughts, and climate change impacts will reduce the annual streamflow even further in the coming decades. Their book is quite timely given that current managers need to reconcile those problems for a river that supplies drinking water for upwards of 40 million people in the United States and Mexico, and provides incredibly important agricultural water, recreational opportunities, endemic riparian species habitat, and unmatched beauty in its various reaches and canyons.

Even with current Colorado River decision-makers, it is hard to dispute the validity of the first part of Kuhn and Fleck’s point. Today’s hard-working men and woman who spend careers devoted to improving Colorado River management are indeed incredibly smart, accomplished, and skilled. And with 21st century science, they are even better equipped to fully understand the hydrologic realities of a 21st century Colorado River and its supply and demand challenges. As to the latter part of Kuhn and Fleck’s point—that the previous decision-makers selectively used science for political purposes—we can certainly hope that today’s decision-makers do not make similar mistakes. But it seems the authors’ hope this book serves as a gut check for those decision-makers, as a forced moment of self-reflection. Kuhn and Fleck conclude with questions about whether or not the decisions being made today, such as new shortage agreements, binational negotiations with Mexico, reservoir operation guidelines, and proposed new supply projects, are being justified with the best available science. Or are they instead selectively using science to justify political outcomes? Though we have reason to believe it is the former, we should also hope each decision-maker will think hard about their role, and the role of science, in the decision-making process.