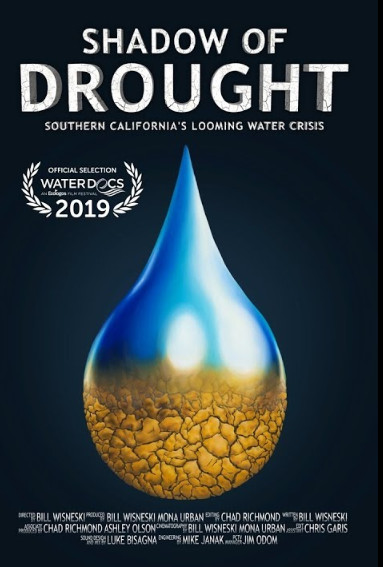 From 2012 to 2016 Southern California faced some of the driest years in history (Griffin & Anchukaitis, 2014). This documentary shows how the citizens of California responded to this event. The drought was accompanied by cascading cause and effect events. Various viewpoints on how the water crisis could occur, as well as expert opinions on what to expect in the near future are touched presented in the documentary. Moreover, it provides an overview of implemented and possible solutions to the looming water crisis and different opinions about these solutions.

In the documentary, Peter Gleick, chief scientist at the Pacific institute, emphasizes the relation between increasing droughts and cascading effects. For example wildfires that recently hit Southern California are both cause and effect of droughts. John Kingsbury, director of Mountain Counties Water, explains that the soil burnt 6 inches below the surface, which means that less water can be absorbed and runoff is 2-5 times higher, leading to new droughts.

Kingsbury points to the difficulties that scientists have in convincing politicians to fund wildfire prevention rather than suppression. Furthermore, trees in an area of approximately 10.6 million ha of forest have lost significant amounts of canopy water due to the drought and fires, making them all the more prone to new fires (Asner et al. 2016).

The hydrological system is also influenced by the shift from snowfall to rainfall. Gleick explains that snow melts slowly, providing a steady flow rate for rivers, whereas rain may cause flooding. This happened in the wet year of 2017, when the (manmade) reservoirs in the state could not hold the water-flows from upstream. 200.000 people had to be evacuated from their homes and the water ran into the sea instead of being stored in the ground or the mountains for dryer seasons.

There is a heated debate between scientists, politicians and civilians on how to tackle this wicked problem: should they build yet more dams, or are other, perhaps more environmentally sound, solutions available? Whatever the policy outcomes may be, catastrophes provide fertile ground for change.

The documentary starts with illustrating how citizens of Southern California are cutting back their water use. Large campaigns with slogans like “Conservation can feel oh, so right, don’t let the tap run (while washing your hands)”, made the public aware of their role in this crisis. Eventually, governor Jerry Brown ordered mandatory water use reductions.

Despite the effort of most residents, Anne Deister (California Water Commision member) explains how Californians tend to ‘forget’ conservation practices after a severe drought is over, using the ‘hydro-illogical cycle’. Meaning that drought initially leads to awareness about water, which then leads to fear, translating into action. But when the drought ends, people suddenly do not feel the urgency anymore, which leads to apathy in conservation practices, while the risk remains (Wilhite, 2011).

P. Gleick explains in the documentary that the severe droughts also offer an opportunity to move away from this illogical cycle and create a new water management ethic with more focus on permanent efficiency measures. Meijerink and Huitema (2010) argue that for opening up these windows of opportunity, the framing of water events is crucial. The intense rainfall in 2017 might have slightly closed the window for this new ethic in California: politicians claimed “we have enough rain, we just need more storage”. However, according to Gleick, more surface storage - next to the already existing 1400 dams - will not solve the problem.

Policy entrepreneurs need to ‘exploit’ this window of opportunity to launch and articulate their ideas on efficiency improvements in order to ‘win’ the ‘framing contest’ (Meijerink and Huitema, 2010). This framing contest moreover implies a central role for traditional party politics (Meijerink and Huitema, 2010). Especially in the US, there are big differences in opinions about water management and climate change adaptation between different parties.

The documentary mainly shows efficiency measures for individual water consumption. However, as the documentary also indicates, 80% of California’s water supply is used for agriculture. With more efficient irrigation techniques, water use in agriculture could be reduced by 15% according to Gleick. However, the historic and current water rights regime disincentivize farmers to be more water conscious. According to Gleick establishing a legislation that would induce farmers to take costly water saving measures would be politically difficult.

Unfortunately the documentary does not provide much information on the water governance system. However based on the available information, one could argue that the influence of neoliberal thought that prevails in the USA has an influence here too: big agricultural firms are protected by law to keep up their practise, while individuals pay the price and take the blame. This mechanism of shifting attention from big polluters or consumers of resources has been described by critics of neoliberalism and might very well apply to Southern California (Paterson & Stripple, 2010; Lukacs, 2017; Van Iperen, 2019). Oddly enough the film hardly refers to the 2014 law that tried to enforce rules for Irrigation Districts to come up with locally-negotiated sustainability plans. With view to Gleick's final statement  "California can be and is a leader in moving towards more sustainable water management and use! But are we going to move along that path fast enough?" it is hard to locate this leadership, technology aside. It is increasingly clear that what was politically feasible in 2014 only triggered a slow move along the path.

The documentary looks very professional. It makes use of beautiful drone footage of natural landscapes and interviews with experts. Besides their own footage, they use video material from other sources. For instance personal youtube videos in which people express their happiness that the drought is over, giving the documentary a playful element. This, moreover, makes it easier for the audience to relate to the people facing this drought. Audio and visuals complement each other. Very often the scenes change on the beat of the background music.

The footage is edited with humour. For example how different people pronounce ‘desalination’, which makes the documentary also easy and joyful, despite the ‘seriousness’ of the topic.

The opinion of the filmmakers is clear and they support using less water rather than meeting current consumption with new infrastructure. However, one never feels that their opinion is overbearing.

Lukacs, M. (in The Guardian on 17-07-2017). Neoliberalism has connected us into fighting climate change as individuals. Retrieved from https://www.theguardian.com/environment/true-north/2017/jul/17/neoliberalism-has-c onned-us-into-fighting-climate-change-as-individuals on 19-01-2020.

Wilhite, D. A. (2011). Breaking the hydro-illogical cycle: Progress or status quo for drought management in the United States. European Water, 34, 5-18.