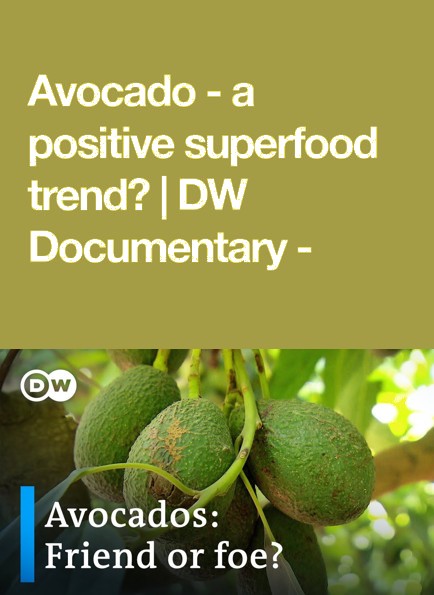 In recent years, avocados have risen in popularity in many places as a ‘must have’ superfood. But like many things brought to us from developing countries, there is a covert story of the true costs of what it means to grow, harvest, and ship avocados all over the world; a phenomenon known as the water-food-trade nexus (Allan, 2003). The exotic tropical fruit is notoriously water intensive, using about 1,000 liters of water to harvest 1 kilo of finished product (El Aguacate, 2018; Panez-Pinto et al., 2018).

In 2018, 'El Aguacate', a Deutsche Welle Documentary explores the workings of Chilean avocado exports and the impact it has on local communities and water sources in the area. In his 28-minute documentary, director Matthias Ebert focuses on large scale commercial avocado farms in the Llay Llay province of Chile as well as in the semi-arid region of Petorca, Valparaíso to uncover the truth behind what is colloquially known as ‘green gold’.

In Petorca, the government declared a water 'emergency area' but has chosen not to regulate the mass avocado production that relies on the local river and subsequent groundwater for its irrigation (Bolados García, 2016; Panez-Pinto et al., 2018). The growing global demand for avocados coupled with hydroclimatic vagaries have left the rural population of Petorca with no option other than to rely on tankers to meet their minimum water demands, with nothing left for their now dry subsistence farms. Furthermore, one of the largest avocado exporters (in the Llay-Llay province) invokes his right - as a water permit holder - to appropriate water from glacial sources by diverting rivers and creating ponds and reservoirs (partially sponsored by the state) to feed his massive avocado mono-plantation.

The documentary follows local citizen and agricultural engineer, Rodrigo Mundaca to the site of the dried up La Ligua River that has since become a dumping ground for the surrounding area. They recall memories of summers spent at the river and blame huge avocado exporters as well as the inaction of policy makers for the loss of their beloved river. They also visit the home of Zoila Quiroz who shows what remains of her once flourishing fruit trees and subsistence farm. El Aguacate also held interviews with the Director of the Chilean National Water Directorate as well as the founder of a non-profit neighbourhood cooperative - Aguas de San José - to get a well-rounded understanding of the water issues in the region.

'El Aguacate' portrays a notable case with key characteristics of water grabbing: water shortages generated by excessive diversion of water that affected large portions of the local ecosystem; undernourishment portrayed by the fact that small scale farmers are no longer able to sustain their livelihoods; and the abuse by powerful actors that build illegal water extraction pumps for irrigation with little to no oversight (Dell’Angelo et al., 2018a). The documentary exemplifies instances of social inequality (Bolados García, 2016), through its interviews with local community members as well as large avocado exporters. First, we see a process of rapid land and water property accumulation (Dell’Angelo et al., 2018b; Franco et al., 2013; Rodríguez & Martínez, 2013). Second, there is a lack of understanding of and empathy for rural families facing water scarcity, barely being able to meet their minimum water needs - especially in the dry season. This is made particularly vivid by the visit to Zoila Quiroz’s home, where her dry and dead fruit trees border a flourishing avocado plantation. Lastly, there are infrastructural inequalities between local farmers and large scale commercial farms. Only these companies are able to drill the 120 meter deep wells needed to extract water from the aquifers for their plantations. Since water has been defined as a key input for economic growth and production of goods, it should be allocated to areas that are more efficient in creating added value (Harvey, 2007; Larraín, 2012) As a tropical fruit, growing avocados in a semi-arid region means it requires much more energy and water input than other more efficient crops of the region.

The documentary touches upon an important discussion concerning the Chilean Constitution and the water property regime of 1980, that marked an extreme neoliberal experiment (Harvey, 2007). In 1981, a Water Code was enacted that essentially commodified water as a private economic asset thus setting in motion an unregulated water market (Larraín, 2012). Furthermore, Chilean water has become appropriated by European and Asian countries through the export of avocados in the form of "virtual water" (Dell’Angelo et al, 2018a and b). The documentary does a good job at communicating not only the social costs of this growing export commodity but also the environmental impacts involved in harvesting and distribution, as well as the drying up of the river.

Given its brevity, 'El Aguacate' does a great job at incorporating all of the actors involved both directly and indirectly in the avocado market. There is a good mix of music, narrative, and interviews, and it uses shots of a dried up river and dead small-scale farms to deliver its message. It is a fairly unbiased documentary given the fact that it is produced by a German television channel yet is very critical of the large scale avocado plantation owner who is of German descent. They also note the colonial history of Germans in the area and their ability to create an ‘avocado empire’ at the expense of both the locals and the environment. The documentary invokes feelings of indignation and disappointment, especially when it shows the remains of subsistence farms that border huge and flourishing avocado plantations. Even in the depths of a water crisis, such an unequal allocation of water is fueled by our desire for avocado toast and guacamole. Aerial shots are successfully employed to portray the hard-to-grasp size of these monoculture giants as well as the useless bridges with dried up waterways underneath. 'El Aguacate' excels in inviting the observer into the journey of avocados from the Chilean farms to the tables of a Dutch restaurant - The Avocado Show. It raises our awareness about the dark side of this commonly praised superfood, which however has not yet reached the masses, as can be seen in the interviews with customers at the Avocado Show and suppliers at the World Fruit Expo. After watching El Aguacate, you will likely be flooded with images of dried up rivers and huge mono-plantations the next time you reach for an avocado or see it listed on a menu.