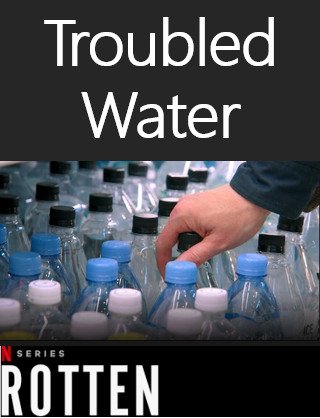 Bottled water is a highly wanted product. The companies providing this water are using the same water resources as the public water suppliers, changing water from a public to a private good. In this documentary we see the 'rotten' side effects on citizens of the actions of companies such as Nestlé.

In 2018, 400 billion liters of bottled water have been sold in the world, with a market estimated to grow to 450 billion liters by 2023 (Statista, 2019). Bottled companies such as Nestlé, Danone and Coca Cola-corporation are making billions of dollars with the production and distribution of bottled water worldwide. This water comes from springs, aquifers or just regular tap water. This documentary raises the question: "Who owns this water?"

Bottle companies mislead consumers with the idea of the source; "Spring water", "Earth water" or "Purified water" but the sources from which they extract the water are different. Perrier et al. (2001) distinguish between 3 major types of bottled water: Natural water, Mineral water and purified water. For all these major types of bottled water, different regulation for different continents exist. For example they took "Poland spring" and investigated where theis water comes from. This "mineral water" can originate, in the United States regulation, from different springs and sold under the same brand name. Spring water is extracted from underground water which flows naturally to the surface. The documentary also mentions the Coca Cola-corporation that sells "purified water". This bottled water only differs from tap water through the way it is distributed (Perrier et al., 2001)

The documentary shows how water companies in Philadelphia used a focus group to better understand drinking water users. This focus group study concluded that 43% of the households drink bottled water, while a rate of 59% for households with a lower income. Onufrak et al. (2014) showed a similar trend: the higher the household’s income, the more confident they are in the regular tap water. As for ethnicity, the non-Hispanic white people seem to be the most confident in the tap water, compared to other ethnicities.

The documentary succeeds in making an overwhelming impact on the viewer, providing new insights and information on the bottled water industry. The director’s way to show the dramatic impact of this industry on the environment, to alternate between experts on water, who are convincing the audience of the seriousness of the problem, and the people who are experiencing these problems, allow the audience to really sense the magnitude of the problem.

While the documentary begins with the story in the United States, it later turns to what is happening on a global scale. It makes clear to the viewer that this is a global problem and not one that would be limited to either developing or developed countries.

But this documentary has a certain bias. From the beginning, all the commentaries on the bottled water companies are negative, except for one, the town manager of the city of Evart, Zachary Szakacs. He indicates how Nestlé has helped his town with building roads, new schools and playgrounds. The viewer might think that this illustrates another side of the story but Szakacs is later on used as an example to show the companies' strategy to gain public acceptance, with the city of Manderegi as an example of place where they did not fulfil their promises. Even though the title of this documentary already made clear that its intention was to demonstrate the rotten side of the bottled water industry, there could have been a higher diversity of speakers. This could have brought some qualifications to what the film director calls "a pact with the devil". Although the documentary specifies that Nestlé declined being interviewed and only gave a written statement, this leaves the viewer uncertain about whether this is only the dark side of the story as no opposing view was considered by the filmmakers, even though Nestlé later provided fair arguments against the documentary (Nestlé 2019).