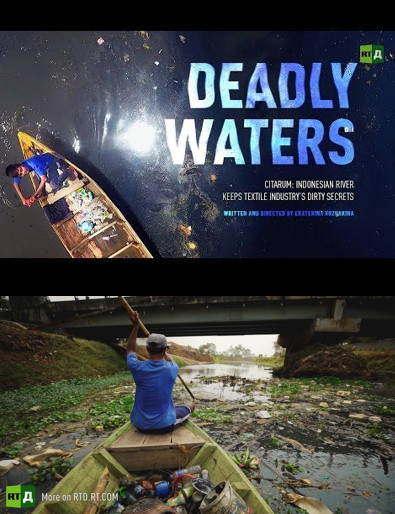 The Citarum, located in West Java, Indonesia, is, according to the documentary, the world’s most polluted river. The river stretches for 300 kilometres and provides crucial water supply for local livelihoods. Along the riverbed, however, are also located 2000 industrial facilities, mostly from the textile industry. These facilities dump 280 tonnes of toxins in the river daily, while this very same water is used to irrigate 4000 rice fields and supply 25 million people with drinking water. Consequently, rice yields have dropped and people have become sick and got skin problems from the water.

The documentary both shows the current situation and describes what actions have been taken against the problem. In 2000, the government decided to invest in cleaning the river, but without any results. Environmental activists found out that the textile industry uses so called ‘ghost drains’, presumably illegal drains to dump waste water in the river. The river pollution spreads 100 meters wide in-land and 60 meters deep, containing E. coli bacteria, heavy metals and organic waste. Lead concentrations are three times higher than the maximum allowance. The environmental activists have won a lawsuit against the largest textile factory in the river basin, but no changes have been made and there is no further enforcement. In response, environmental activists cement the drains, stopping toxic water getting into the river. Despite their determination, the governmental agencies responsible for the environment have “superior motives”.

Aside from industrial waste, household waste is another major problem that this river faces. Often, residents along the river basins are poor and have no funds to install a proper sewage system or water treatment facility. Besides, the government does not either provide recycling facilities, causing garbage to end up in the river. In the broader picture, Asian rivers account for ⅔ of the plastics in the ocean. The government has now declared its intent to solve the river pollution problem within seven years.

The pollution in the Citarum river basin has two main causes: the conflict in water usage in the basin and the lack of enforcement and regulation.

Farmers rely on the river to irrigate and grow their crops, factories use the river water for production of goods, all the while 25 million people rely on the Citarum for either direct or indirect uses (Kozhakina, 2019; Purwanto, 2016). All these uses deprecate the water quality of the river due to sewage discharge, industrial and solid waste (Fulazzaky, 2010). The documentary starts with the focus on industrial waste and the impact this has on the environment. The main contaminants are, according to the documentary lead, chromium, zinc, and polonium. The health effects of these pollutants are, amongst others, respiratory effects, certain kinds of cancers, ulceration and blistering of the skin and even death (Ab Latif Wani & Usmani, 2015; Costa & Klein, 2006; Nriagu, 2007; Scott, 2007). The documentary shows skin irritation and ulceration, which are a consequence of overexposure to zinc (Nriagu, 2007). According to the literature the health effects of coming in contact with these pollutants could be more extreme, which, if considered, would have made the documentary even more impactful.

In the upper part of the river, households are the main source of pollution instead of the industry (Sunardi & Ohtsuka, 2005). Households dump several types of waste into the Citarum, including sewage waste and plastics, on which the documentary focuses. But the documentary fails to acknowledge the consequences of the plastic waste, which are amongt others, blockages and deaths in the river ecosystem (Suryaningsih & Hidayat, 2019). Furthermore, it emphasizes the impact of plastic waste on human lives by showing that people make a living out of collecting waste.

The documentary only briefly touches upon the environmental impacts. The rice fields can no longer produce sufficient amounts of rice and the river contains so little oxygen that it is essentially a death river (Citarum.org, 2012). At most places the river is completely unsuitable to support a biological function or aquaculture (Fulazzaky, 2010). Despite this, the farmer in the documentary is shown digging a fish pond to replace his rice fields with in order to sustain a livelihood. An issue overlooked by the documentary is that of the hydropower dams, which are also damaged due to pollution (Sunardi & Ohtsuka, 2005).

Since the urbanization of the river basin continues unabated, the problem of pollution in the Citarum will only become worse if nothing is done to prevent it (Fulazzaky, 2010). The government already tried several river clean-up programs (Kozhakina, 2019). The Indonesian Government was even granted a 500-million-dollar loan by the Asian Development Bank in 2007 to implement Integrated Water Resource Management in order to solve the issues concerning the Citarum river, but to no avail (Cavelle, 2013). In 2018 the government initiated a river cleaning project called Citarum Harum that involved many stakeholders (Kurninawan, Rahju, & Ma’ruf, 2018). Two years later this project is showing some effect.

The documentary strongly succeeds in bringing across both the sense of despair of the local people and the root causes of the problem. For example, it triggers emotions in a scene where a local river garbage collector admits his hope for finding a pair of shoes sometime in the waste, after which he starts crying. This scene clearly shows the level of poverty at the river basin, but also how the locals have come to deal with the problem: making a living from waste. The essence of the problem is strongly illustrated by a skilful combination of interviews with local people, experts and environmental organisations. The range of conflicting interests come out well in the interviews. For the full picture, it would have been interesting to get some sense of how the government and local industry perceive the problem. As mentioned during the documentary, they were not willing to provide an interview. The integration of hidden camera footage provides an extra and good component to the ‘investigation’ approach of the documentary.

Fulazzaky, M. A. (2010). Water quality evaluation system to assess the status and the suitability of the Citarum river water to different uses. Environmental monitoring and assessment, 168(1-4), 669-684.