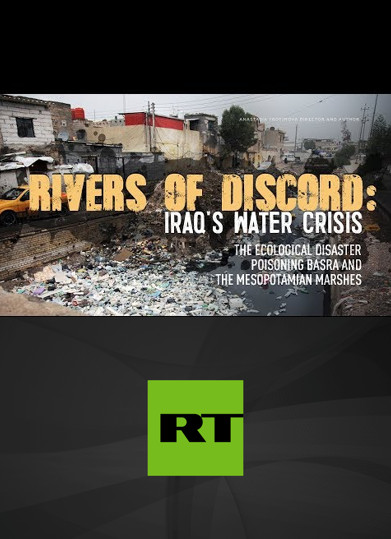 August, 2018. 150,000 people have been struck with severe water poisoning in Basra, Iraq’s second city, resulting in violent protests. Formerly known as the ‘Venice’ of the Middle East, Basra’s waters are now nearly 22 times over recommended salinity levels. The Shatt al- Arab, where the great Euphrates and Tigris rivers meet, has been reduced to a mere trickle and is clogged with toxic waste. It is the worst water crisis in Iraq’s history.

‘Rivers of Discord’, produced for Russia Today (RT), demonstrates that the crisis cannot be viewed as an isolated event but as a symptom of decades of neglect under Saddam Hussein’s political regime, sanctions, warfare and American occupation, which have all taken their toll on the country’s water infrastructure and management. These issues of water quality and quantity are further aggravated by upstream development projects in neighbouring Iran, Syria and Turkey. The documentary follows the individuals behind Iraq’s only environmental NGO, ‘Nature Iraq’. Iraq’s recent history is reconstructed through interviews with Azzam Alwash and Jassim al-Asadi, who have dedicated their careers to a struggle for a responsible management of water.

‘Rivers of Discord‘ highlights the multiple and often contradictory attitudes to water in Iraq. Alwash explains that historically this was a nation blessed with ‘too much’ water, neatly summarising that ‘dilution was the solution of pollution’ for Iraqis. The citizens of Basra, pushed to desperate lengths for clean water, simultaneously dump their waste directly into the river.

Iraq is, therefore, an eloquent case study of the relationship between water and conflict, both domestically and internationally. As Wolf (2007) notes, disputes often arise between those affected by pollution and the perceived polluters. In Basra, this escalated into violence in an attempt to get the government to act. However, many factors contributed, including the community’s own waste management practices and increased concentration of pollutants due to lower water flows in the river, as well as saltwater intrusion from the Persian Gulf (Yaseen et al., 2016), all exacerbated by insufficient water infrastructure.

The documentary portrays water in Iraq as not just a ‘victim’ of warfare, but also a tool for its execution (Gleick, 2019; Wolf, 2007). The Mesopotamian marshes North of Basra were once a unique ecosystem home to countless endangered species and the traditional Marsh Arabs. They are also the location of Ancient Mesopotamian sites, from the ‘cradle of civilisation’ (Pollock, 2008). Unfortunately, the sprawling wetlands were also the ideal destination for fugitive rebels after a failed coup (Gleick, 2019). Saddam Hussein’s response was to divert the flow of water, completely draining the marshes and turning this former ‘Garden of Eden’ to dust, in an attempt to starve out the rebels. Alwash describes how the temperature subsequently rose by 5 degrees, fish catch was depleted, and Marsh Arabs were killed indiscriminately. This cruelly illustrates the profound social, environmental and cultural effects of localised acts of war.

‘Rivers of Discord‘ explores the role of local activism and of the NGO ‘Nature Iraq‘ in restoring the marshes after the end of the war in 2003. Together with local residents, they damaged the embankments that were subsequently broken by the Tigris and Euphrates, leading to the re-flooding of approximately 20% of the marshes by March 2004 (Richardson et al., 2005). However, the future of the marshes remains at the mercy of upstream changes in water quantity or quality, and salinisation and desertification continue to be ‘Iraq’s greatest environmental threats’ (Gibson et. al, 2012).

Though climate change is mentioned, and low-lying Iraq is particularly vulnerable to its effects, it is the international rivalry for water which poses the highest risk to Iraq’s future (Chenoweth et. al, 2011). Iraq is the furthest downstream of five riparian nations in the Tigris-Euphrates delta, all of which are continuing investments in dams (Jongerden, 2010).

Tensions are high between the countries, and Alwash is invited by Iraq’s new Prime Minister to participate in negotiations with Turkey, where he advocates diplomacy over escalation.

The crisis in Basra can, therefore, be seen as a ‘focusing event’, which highlights the urgency of the water crisis and stimulates political engagement with environmentalists (Meijerink & Huitema, 2010).

The film opens in a crowded hospital in Basra, where patients are being treated for water poisoning. ‘The water is killing us,’ one relative cries out in despair. Then comes the residents’ own grainy footage: muddy water choked with worms, and foam flowing from the taps, so toxic that it is inflammable. Shots of the ensuing riots contain graphic images of brutality and bloodshed on the streets. However, director Anastasia Trofimova subverts these all too familiar scenes of violence in Iraq by associating them with water, not war.

To give the viewer historical context, Trofimova splices present day interviews with British archive footage from 1954. The contrast between the former wealth and prosperity of ancient Babylon and the war-torn present day is stark. Maps and infographics are also used to good effect, guiding the viewer and quantifying the devastating effects of successive conflicts on Iraq’s water system.

A potential criticism of this documentary is that it is an imbalanced account of the water crisis. Voices from the political administration are absent and no reference is made to recent events, such as the rise of the Islamic State in Iraq and how this affects the water supply.

However, by following the charismatic Alwash we get a unique insight into civilian life and the daily hardships of the Iraqi people. Trofimova humanises the conflict by including Alwash’s personal narrative. We see the personal sacrifices, including the breakdown of his marriage, involved in performing the thankless task of promoting environmentalism.

Finally, ‘Rivers of Discord’ isn’t all doom and gloom. Trofimova ultimately manages to pull us back from the brink of hopelessness by inviting us to share Alwash’s optimism with Iraq’s new leadership. Just as the marshes have been revived ‘like a phoenix from the ashes’, we allow ourselves to hope that the management of water in this country is in better hands.