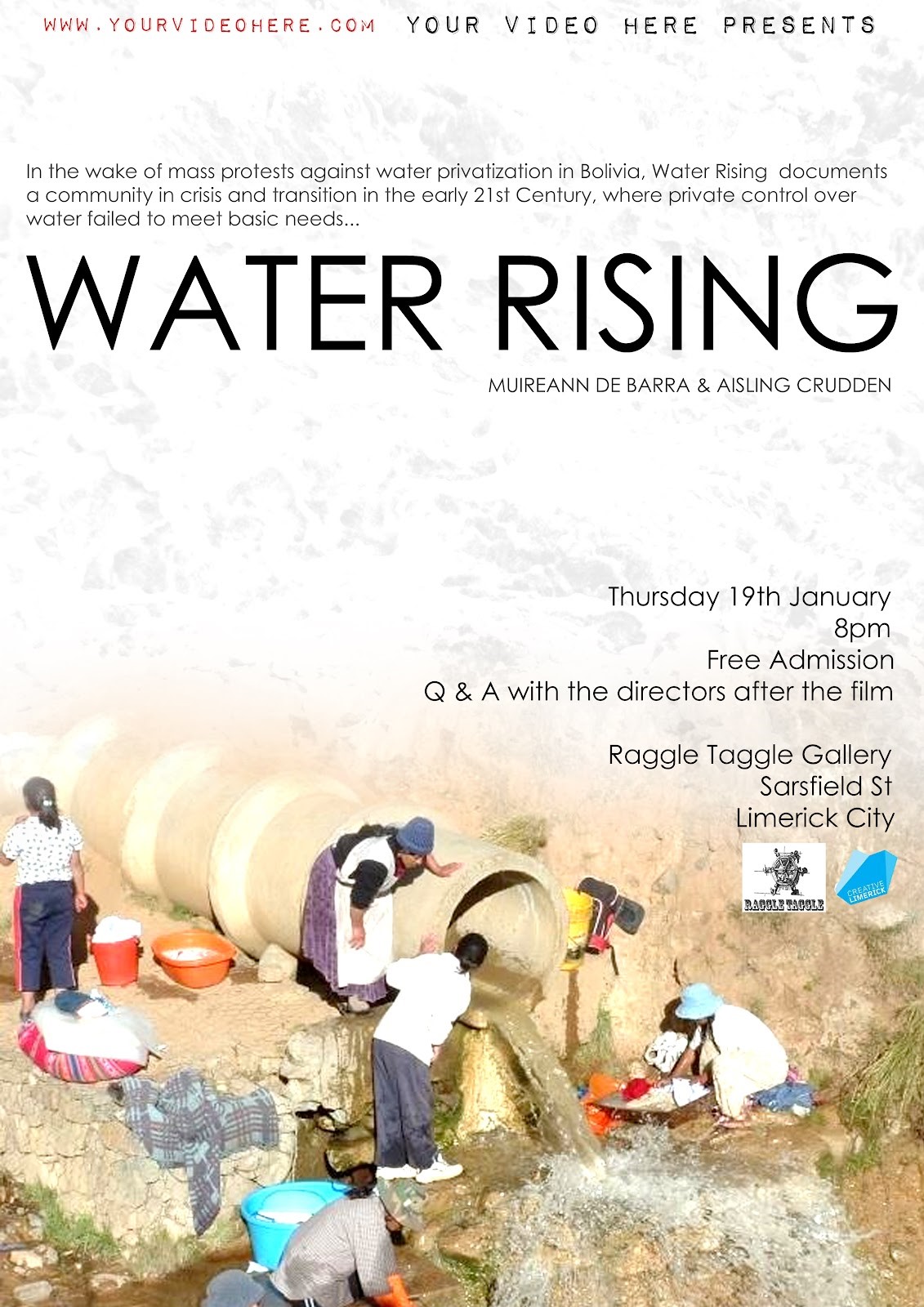 El Alto is a poor city in the mountains of Bolivia largely populated by indigenous rural migrants. El Alto’s water services were privatized in 1997 as a conditionality of World Bank loans to the Bolivian government. In 2005 citizens protested against the private company, Aguas del Illimani, and its parent company, Suez. In 2006 the new president promised to return water to public control, yet the private company remained until 2008. The 2012 50-minute documentary "Water Rising" follows the lives of an indigenous woman, Dona Maxima Huanca, and her family, a community leader, Carlos Rojas, as well as Doctor Hermes Fabio Mendoza while they struggled under privatized water.

Muireann de Barra and Aisling Crudden co-directed and produced the documentary. The voices in the film consisted entirely of those of El Alto citizens without narration. Interviews with members of Dona’s family and Doctor Hermes build an image of suffering. In contrast, interviews with Carlos on his political journey from community meetings to the May Day March protest inspire hope. The aim of the documentary was to depict community, hope, and change in Bolivia in the face of the global trend of privatization.

The documentary centers around privatization of water services. Privatization is part of the neoliberal revolution launched in the 1980s along with deregulation and the rolling-back of the state (Harvey, 2007). The neoliberal revolution brought a process of structural adjustment which Harvey (2007) defines as the economic policies of the International Monetary Fund (IMF) and World Bank whereby, in return for rescheduling debt, "indebted countries were required to implement institutional reforms, such as cuts in welfare expenditures, more ﬂexible labour market laws, and privatization". Privatization is supported by the argument that privatizing public services will lead to greater efficiency and cost-effectiveness as well as improved access and maintenance (Public Citizen, 2003). However, after a case study analysis, Public Citizen (2003) concluded that such benefits often have not been realized in practice. Given the exorbitant water fees, lack of access, and poor conditions in El Alto, the proposed benefits of privatization seem far from reality.

Grusky (2001) highlights the hypocrisy of structural adjustments. Rich countries that influence the IMF and World Bank recognize the benefits of subsidizing water services in their own countries. Yet, they push policies in developing countries that cut subsidies and increase consumer water fees (Grusky, 2001). The first step before privatization is usually for governments to raise prices and demonstrate "full cost recovery" because private companies want to make sure consumers can meet the cost of running the system before they step in to increase prices further, in order to earn a profit (Grusky, 2001). Thus, Grusky (2001) argues that World Bank policies inherently come with increased costs on the consumer and presents Nicaragua, Ghana, and Tanzania as examples. The price increases seen in El Alto are therefore not an exception but the rule. Privatization in El Alto allowed Aguas del Illimani "to make inordinate gains without commensurable service to the community".

The social movement behind the eventual removal of the water company is integral to this story. El Alto was not the first city where protests eventually led to the cancelation of a water privatization contract. The same process happened in Cochabamba, Bolivia in 2000 after months of protests and violence (Public Citizen, 2003). This suggests that privatization is difficult to accomplish in Bolivia, a low-income country, which reflects the general observations of the World Bank Group (2008).

The documentary ends in 2008 with the hope that, after the removal of Aguas de Illimani, the new public water service would install over 250,000 new water connections in El Alto by 2012. One criticism that can be levelled at the documentary is that it doesn’t question how the new public system might perform. Schneier-Madanes (2014) doubts that a public water service would significantly reduce inequalities in water access. Possible reasons for this are confusing legal background and lack of funding (Poupeau, 2008). Problems encountered upon returning to public management have not received much scientific attention despite the fact that people's expectations are often not met (Driessen, 2010). Difficulties, inherent to many developing countries, includes high population growth, lack of regional planning, funding and infrastructure (Troin, 2000). Learning from Bolivia’s transition could be useful for the future.

The journey of the documentary is from despair to hope. This development is reflected both in the arrangement of scenes and the music. One scene shows Dona’s children retrieving water from the waste pipe that runs out of the private water treatment plant since they can’t afford the $440 private connection fee. Dona describes the water as always smelling of petrol and that three children have already died from drinking it. This scene is simply gut-wrenching. Another scene shows Doctor Hermes unable to find a water vendor when the medical clinic runs out of water, meaning he must keep using unsterilized equipment. Such situations are shocking and clearly depict the desperate situation of El Alto. The music in this part of the documentary is filled with long low tones, creating a despondent feeling.

The documentary transitions to hope through showing the strength and cooperation of the community. The community unites to dig and install their own public standpipe. The perseverance is impressive and inspiring as the whole community participates in the gurling manual labor. Furthermore, the community organizes for the May Day March to stand up for the rights of the people and get rid of Aguas del Illimani. Throughout the documentary, the music grows steadily more dynamic. Then at the March, a marching band plays upbeat music that contrasts with the somber tones at the beginning of the documentary. This is a story of how, despite suffering, a community can come together for hope and change.