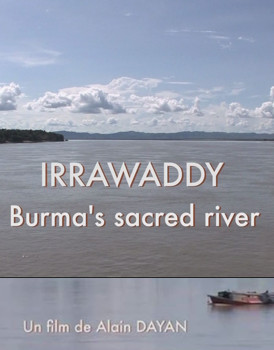 This documentary looks at the everyday life of the people living along the Irrawaddy (Ayeyarwady) River, emblematic of Burma (Myanmar). The Irrawaddy is a millennial axis, the immutable symbol of the Burmese national identity and the guardian of its history. Navigable for nearly 1,400 kilometers, it is the main communication route which irrigates the heart of the country. The Irrawaddy also bears witness to the omnipresence of religion in the lives of the Burmese. Its banks are home to countless pagodas and stupas, and Buddhism provides the rhythm for daily life in villages and towns.

After a short stop in Rangoon (the economic capital of and gateway to Burma), the documentary consists in a downstream river cruise on the Irrawaddy River. From Bhamo, a few dozen kilometers from the border with China, to Pagan, each stopover is an opportunity to discover a new village, market or historical site. The documentary presents the life of fishermen, farmers, potters, as well as pagoda guards and monks.

The Irrawaddy (Ayeyarwady) is one of the less known large rivers in the world. Images of river dwellers and of Myanmar in general are still rare. This documentary was filmed in September and October 2007, in the context of the Saffron revolution and the brutal repression of the monks. On the technical level, the documentary is well done, with beautiful images that capture the atmosphere of the different sites visited. The documentary is informative in the sense that it illustrates the essential functions that the Irrawaddy plays in everyday life as well as its national economic importance: as a vector of transport of goods and people with countless freighters, boats and pirogues that cross it in all directions; as a mother who feeds the riverside crops, livestock, irrigation and fisheries; as a supplier of raw materials illustrated with the bamboo rafts which go all the way down to its delta region.

The succession of encounters provides a quick overview of lifestyles along the river (agriculture, fishing, crafts, transportation). It clearly shows the role of Theravada Buddhism in people’s everyday life and the way it shapes the landscape. Nevertheless, in general, one can regret the absence of problematization or critical viewpoint. For example, the documentary makes no mention of the environmental threats that weigh on certain riverside populations (sand mining, dredging, dam building, deforestation). In May 2007, a few months before the shooting, the military regime of the State Peace and Development Council (SPDC) signed an agreement with a China's state-owned organisation for the construction of seven dams on the Irrawaddy. This event gave rise to a series of protests and demonstrations that are now well known. This would have perhaps been worth mentioning. Thus, this documentary must be taken for what it is, a travel documentary to be classified as a "discovery documentary". Its virtue is geographical, and it has a tourist value.