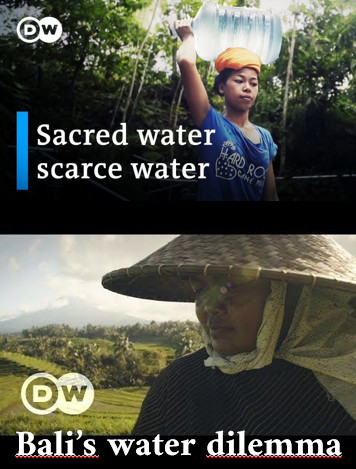 Overview of the film

Running a total of 26 minutes, this short documentary about Bali’s water crisis begins with the right tone. The first scene provides an intimate close up of a woman from a village who walks 600 meters into a ravine to collect fresh water for her household needs. In a jarring shift, the film transitions to the tourism industry and makes a truly scary proposition amidst Bali’s water dilemmas, stating that Bali is “home to 4 million inhabitants, and 14 million tourists come here each year… [but] aims to increase the number of tourists to 20 million.” The film also makes the right assertion that the tourists are unlikely to suffer, suggesting greater vulnerability for the plight of the woman in the opening scene. This film is the eighth from a ten-part series by Deutsche Welle (DW) called “Founders’ Valley.” Hosted by Fridtjof Detzner, he sets out across Asia to identify startups innovating solutions to sustainability challenges. In this edition, Detzner focuses on Bali’s water’s dilemma and highlights two “founders,” one seeking water solutions for the tourism industry, while the other developing solutions for villagers without access.

Detzner first introduces Eco-Mantra, founded by Maitri Fischer and Sean Nino Lotze. Both co-founders describe themselves as foreigners, but having grown up in Bali, returned in hopes of making a positive change. Their company provides an “eco-toolkit, which is a set of solutions for hotels, resorts, players in the tourism industry to address those [energy, water, and waste] challenges.” Eco-Mantra takes viewers through a water park, a project where they helped introduce water efficiency mechanisms. They share their perspectives on water resource management in Bali, and describe barriers to running a business in Indonesia. Detzner spends most of the film with the two Eco-Mantra co-founders, and viewers see Bali through their eyes. The second “founder” is a Balinese man named Rus Alit. Having left the island in 1969 to work in international development on small scale water systems for poor communities, he returned to implement this work for the benefit of his own communities. His organization, Bali Appropriate Technology Institute (BATI), develops small-scale affordable technologies to improve water access. In the film, Detzner joins Alit for the construction of a BATI project, building a water pumping system to provide water for the woman’s village in the opening scene.

Throughout the movie, Detzner has several reflective monologues to explain his conclusions about water dilemmas and potential solutions for Bali. He first takes viewers to the Gunung Kawi Sebatu Temple to explore the connection between water and religion in Bali. Here Detzner interviews I Made Suasta, and they discuss the spiritual elements of water. Suasta describes how water is life, the ways it powers the purification of mind, body, and soul. Detzner reflects on the simple beauty of Suasta’s formulation, that “sometimes we stop appreciating the things that are fundamental.” In a stark contrast, Detzner transitions to the commercial bottling company operations of the Danone Aqua plant, where he interviews the manager Forcy Tjahyana Tjandra. Wearing hardhats, with the backdrop of beeping industrial equipment, Tjandra tells us at full capacity the company can collect 500 million liters per year, that water is a good business and demand continues to grow. Reflecting on his own privilege of always having a source of clean water, Detzner states that “privatization of water is definitely questionable.” He explains to viewers that in Bali people have become reliant on increasingly expensive water, restricting access to some.

Given this access problem, Detzner returns to the two founders. Eco-Mantra explains water solutions are already here, in that the strength of Bali is premised on its long history of complex water management system called the subak, which Fischer explains is “the reason why Bali has prospered and is what it is today.” Discussing the negative outcomes of always chasing return on investment, Eco-Mantra explain they are driven by creating a different kind of surplus: surpluses of energy and water. Meanwhile, back in the village with Alit, Detzner discusses the simplicity of the water pump BATI are building to connect the low-lying ravine with the village at a higher elevation. Using the metaphor of a heart to describe the pressurized pump-valve system, Detzner questions why such simple technologies that have been around for centuries could not be more widely applied to provide more water to people in Bali.

The main shortcoming of this film is that it tries to provide a critique of a governance problem and lands on a solution of private business and a small NGO as a model for addressing the problem. By mischaracterizing Bali’s water dilemma as a privatization problem of a scarce resource, the film ironically suggests fixing the problem through private entrepreneurial ventures. However, privatization is a small element of a much more fundamental problem, namely the mismanagement of water. Focusing on privatization therefore seems like seeing the tip of an iceberg, while overlooking the much larger submerged structure of the issue (Wardana, 2019).

Almost all hotels and other tourism industry infrastructure, as well as a large percentage of households in Bali, get their water from underground, mostly unregistered wells (Cole, 2012). During a hotel industry association workshop, I facilitated in 2019 about this issue, hotels openly expressed interest in using water utility (PDAM) services if it was more reliable. On the other hand, government agencies say that hotels do not want to connect to the PDAMs because groundwater remains cheaper and easier to access. Taken together, the lack of political will to regulate and enforce, as well as a political economy driven by unabated tourism growth, provides a much clearer explanation for Bali’s water dilemma. Bali is in fact endowed with rich water resources. Indeed, Bali’s water problem is not much different from the other mismanaged and overburdened public services on closely related issues such as wastewater and sanitation, or the poor quality of solid waste management, which gains much more visceral attention among tourists. Far from these problems to be solved by private enterprise, the more obvious solution is first to establish and enforce regulatory interventions to address groundwater wells, require water saving measures among those that abuse the resource, and in parallel, integrating and improving public utility management that delivers reliable water to hotels, villas, restaurants, and households.

The second major issue related to water is touched upon briefly during the film and relates to the geography of water in Bali. Before tourism became the economic driver for the island, livelihoods were shaped by agriculture, in which farmers established an intricate system of water resource management (Geertz, 1980). The subak system connects farmers across a system, beginning in upstream areas with those responsible for protecting water resources and sharing the resource as it travels through the system under a closely coordinated social structure that continues to shape Bali’s iconic rice-terraced landscapes. In the film, and as is commonly the case, the subak is essentialized as a democratic system that began one thousand years ago and continues to serve as the foundation of prosperity for the island (Roth and Sedana, 2015). The truth is, however, thousands of hectares of subak land have been converted in the past generation for tourism and development, and for those that continue to work in the subak, face widespread pressures to their water resources and livelihoods (Lorenzen and Roth, 2015). As water resources are located in the uplands at the center of the island, most of the tourism infrastructure is located in the South. This is what has created such overwhelming pressures on the groundwater in Bali’s Southern region. Meanwhile, the film overlooks where water scarcity is most pressing, namely in the rural, dry, Eastern part of the island.

One final note apparent in the film is the representation of women. It is true that as most places around the world, the burden of water dilemmas fall hardest upon women. However, I could not help but notice that the only two women in this film was first rendered a victim to be saved, and the second a voiceless representation of the subak. Meanwhile, all of the individuals offering solutions are men. Perhaps providing a woman’s voice to speak on behalf of the most vulnerable could have been one approach to examining potential “founding” ideas.

Geertz, Clifford. "Organization of the Balinese subak." Irrigation and Agricultural Development in Asia: perspectives from the social sciences (1980): 70-90.