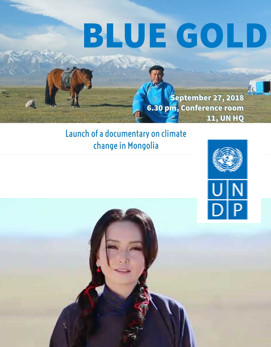 The film “Blue Gold” by Daniel Price and Adrien Taylor centers around water resources in Mongolia. It illustrates the effects of climate change on important water reservoirs such as glaciers and takes a look at what diminishing water quantity would mean for water-dependent livelihoods such as those of semi-nomadic herders. Beautifully shot, the film provides insights into both rural and urban settings and illustrates how Mongolians are impacted by climate change, even their practices of coal burning and extraction contribute to it. The documentary gives voice to herders, as well as to Mongolian experts, UNDP officials and non-Mongolian scientists. It offers a glimpse into Mongolian culture through the long history of herding and Buddhist and animistic beliefs, and ties these to current economic settings and global climatic processes.

The documentary offers beautiful landscape shots that give the viewer a great sense of the vastness of the Mongolian countryside. By combining these images with traditional Mongolian music, the documentary transports the viewer right into its setting. It does a great job at explaining the importance of water from the perspective of maintaining herding livelihoods, as well as from a cultural point of view. The precariousness of herding is illustrated clearly in the beginning, giving viewers an understanding of what is at stake. Background information is presented nicely in the form of small, informative texts that are overlaid over shots of landscapes and herding activities. Apart from foreign scientists and development practitioners, the documentary also gives voice to Mongolian herders and experts, capturing their perspective on water resource degradation and climate change.

It does not entirely, however, escape the temptation of letting foreign experts explain another country’s problems. In particular the staff of UNDP gets a disproportionate amount of screen time, explaining dynamics on which, certainly, Mongolian experts would be able to speak as well. Here, the framing of the shots (often wide, with the UNDP representative sitting slightly elevated in front of official flags) communicates power, while the next Mongolian expert who is interviewed sits on a singly chair in a hallway. Here, more sensitivity towards issues of representation would have been desirable. The second weakness of the documentary is the scattered nature of its narrative. At times, it is hard to remember that water is supposed to be the main topic, as the narrative moves from the physics of climate change to air pollution in the Mongolian capital without explaining how this ties to water, exactly. Finally, the documentary frames water resource problems in Mongolia almost exclusively around degradation from overgrazing and from climate change. It brings up mining, but only in relation to climate change and issues of reducing global demand for fossil fuels. It fails to explain how exactly mineral extraction affects water resources in Mongolia and, in consequence, the issue remains underdeveloped and underexplored. The documentary does not address mineral resources other than coal (such as copper and gold) that are extracted at high rates throughout the country and that contribute heavily to water degradation. It only briefly mentions the political economic importance of mining as a key motor of economic development in Mongolia. In doing so, it fails to problematize the fact that in order to prevent water contamination and depletion from mining, much more would have to be done from a governance perspective than simply putting a global tax on carbon or installing renewable energy technology. In consequence, the documentary sheds insufficient light on a sector that, by contributing to water resource and pasture degradation, poses at least as much and as immediate a threat to herding livelihoods as climate change does.