Paper water and other sordid tales 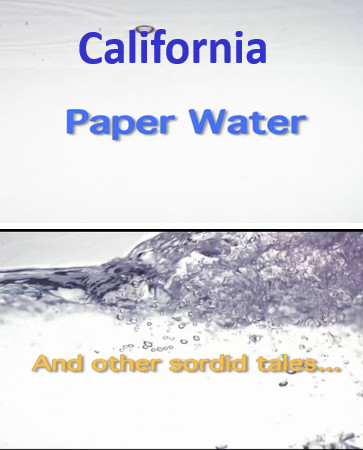 This short documentary on California (35mins) argues that there is a concerted effort to take water away from the public and transfer it to private ownership. It presents four examples to illustrate this effort, briefly describing 1) the business and political relationships of Stewart Resnick, 2) the constitution of the Kern Water Bank, 3) the Monterrey Amendments, and 4) the economic and political power of Westlands Water District.

The documentary was published in 2010, a year before the start of the latest California drought. Hence, it focuses broadly on the contested popular issues of that time, namely protecting environmental flows for anadromous fish and other species habitat, securing water for urban cities, and water for agriculture. Since then, the latest drought highlighted another important lever into California water politics: the human right to water and safe and affordable drinking water for everyone in California. As a result, the documentary does not discuss the important issue of environmental justice in California’s Central Valley.

The documentary claims to present 'factual evidence' for each of the four cases it presented. While key detail information is presented, and some interviews with experts are covered, the documentary falls short of providing a scientifically backed narrative supported by a wide-range of interviewees. A total of seven interviews, two of which work for the same organization, are covered in the documentary. More nuance, particularly from an environmental history perspective, and from a hydrological and ecological perspective, could have made the narrative and argumentation stronger. Similarly, efforts to interview the “other side” of the story, namely efforts to interview Stewart Resnick, the Kern Water Bank, Metropolitan Water District or Westlands Water District staff would have allowed a more complete reporting of the illustrated case studies presented.

In short, the documentary presents a brief overview of some key water districts and their business and political deals to secure water rights for private ownership and profit, while further constraining water allocation and socially constructing water scarcity (Kallis, 2008; Molle, Wester and Hirsch, 2010) in California.