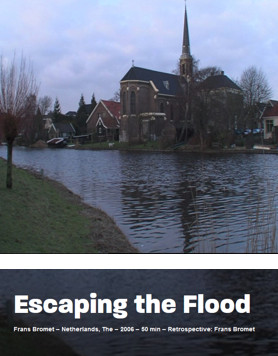 'Escaping the flood' documents the film maker’s concerns about climate change impacts in a low-lying polder in the Western part of the Netherlands. His concerns are sparked by alarming predictions  in 2005: in twenty to forty years, this part of the Netherlands will be flooded because of melting ice caps and subsequent sea level rise. How serious should we take these risks? What do scientist, local authorities, and lay persons think about this and moreover, how should we react? The film maker interviews professionals but moreover involves his own family to discuss these questions and potential responses.

The documentary was produced and published in 2006, triggered by extensive news coverage and a minister’s response on a 2005 report warning for severe global temperature increase cascading into melting ice caps, sea level rise and submerged deltas. Interestingly, this report was no publication of the IPCC, as one would expect after such a wave of public media attention, but of an ad-hoc International Climate Change Taskforce set up by British, American and Australian policy research institutes. Not only a Dutch minister, but high-ranked professionals in academia and regional water authorities were screened nation-wide to reinforce its alarming message: climate change is inevitable and we should prepare for the worst.

The Netherlands is probably known for its low-lying delta geography: more than half of the country is below mean sea level, which means that without coastal protection works and riverine dyke systems, these areas would be flooded instantly. Some of the lowest parts of the country would be flooded 6 meters deep; even deeper if this would happen during a storm surge. These Western part of the country is at the same time the most densely populated, and most active in terms of the industrial activity, GDP production and transportation. Can this be maintained, in the face of climate change? An easily readable discussion about his at the time is filming is published by Wesselink et. al. (2007).

The documentary nicely highlights the contrast between professionals who rely on flood defenses and the 'fight against water' strategy, while other experts express their doubts about the long-term feasibility of such approaches. They latter suggest to openly think about other adaptation options. It is noteworthy that all of them have a different, not purely water-oriented, professional background (landscape architecture, geography, anthropology). This indicates that it is worthwhile to think and talk 'out of the box' and 'out of your sector' to develop innovative ideas and new insights. The interviewed water professionals, perhaps due to their professional role, showed unscathed trust in the long-term capacity of the flood defenses to keep the sea at bay, something that can be well expressed by an institutional lock-in.

By prominently involving his closest family in this debate, the film maker does well to translate fairly abstract concepts and vague long-term futures into practical topics for decisions: do his family members prefer to stay, with some measures to their homes, or to relocate to higher grounds? Together they explore options to modify their homes (jacking up the ground floor or turn into a floating platform) or to relocate to the Eastern part of the country. These discussions start from a household and lay person point of view, but soon one gets to realize that it is a collective issue when preferring to stay: you can modify one house, but in case of structural flooding, what about road connections, work and things like health care?

The topic of climate change suffers from generalization and abstractions. Its scale is global, its predictions itself read small (a few degrees warming), its timescale lasts beyond generations. Amitav Ghosh captures this nicely in The Great Derangement (2017) and makes a case, as well as observes the difficulties, to imagine the unthinkable. The film maker does well to try to translate the concerns into practical measures, but in the end reaches a conventional conclusion – the threat is still too far in the future and too unreal to justify drastic measures.

Fifteen years since its publications, most of the interviewed professionals still play a role in the Dutch water sector. Also, some of the topics and proposed scenarios are still part of contemporary professional and public debate, which occasionally sparks up again when major flood disasters hit elsewhere. At the same time, major programs are institutionalized (Delta Program and the Flood Protection Program) that reinforce the Dutch fight against water approach.

Ghosh, A. (2017). The Great Derangement: Climate Change and the Unthinkable. The University of Chicago Press.