Dirty water: Danger from the tap 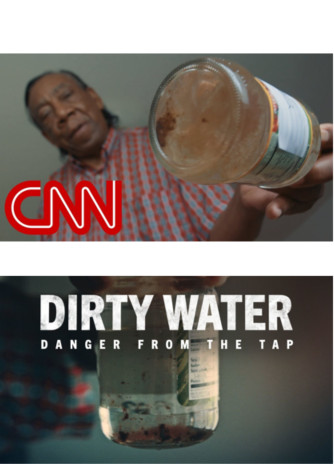 In Enterprise, a Louisiana rural community (USA), Jodie Winson’s family tested samples of tap water for more than a year and the results showed high levels of lead, iron, and enterococcus, coinciding with the period when she and her family got sick.

In Denmark, South Carolina, Paula Brown, Eugene Smith and all their neighbors have been collecting water samples from their taps for a decade. It is often brownish or loaded with suspended matter, which makes it unsuitable for consumption. They all have suffered from illnesses after having drunk water from their faucets. Both of them initially thought the problem was with their piping. After spending thousands of dollars replacing it, the issue wasn’t solved and water conditions remained poor. Their last hopes rest on Professor Edwards and his tests.

The mayor of Denmark is seen sticking to his view that the town does enjoy a high-water quality. Eventually, the documentary shows that local authorities approved the use of HaloSan, a chemical commonly used for pool and spa cleaning, that can generate skin and eye irritation if not properly used. This product is not approved by EPA for domestic water treatment.

Through a Freedom Information Act request, CNN investigated cases of drinking water contamination  involving residents and local authorities from South Carolina and Louisiana [1]. This documentary, intended for the general public, aims at exposing problems with drinking water quality in the United States. It criticizes the non-kept promises made by the current government and the former ones to provide water to all Americans and suggests the existence of racial and social discrimination.

In Louisiana, the symptoms of the Winson family after having drunk contaminated water provides evidence of a cause-effect relation, but that is not enough for authorities who claim that fixing the whole system would be too costly to the state budget and that all what could possibly be done has been achieved. However, no proof of such statement is provided [2]. According to a water study realized by Virginia Tech in September 2017 in Entreprise [3], 25% of the homes sampled had no detectable chlorine, while iron and lead levels exceeded the EPA standards, which points to the authorities' disinterest and negligence [1]. The water of the four wells serving the town is stored in a unique tank. The purification treatment in the wells uses chlorine, but it also appeared that pills of HaloSan were added in the Cox Mill well. The use of this chemical in drinkable water is not approved by the Environmental Protection Agency (EPA) [4]. South Carolina’s Department of Health and Environmental Control (DHEC) lightly refutes that this is problematic by saying that since Berry Systems, the company who produces that molecule, was advertising this product they assumed that it was fine to use it [5],[6].

Even though well documented with independent analyses, the documentary only mainly provides the point of view of the affected population. Indeed, despite the calls made to the different authorities, none of them wanted to testify. Yet, the presentation of scientific and chronological evidence invalidates the claims made in the local newspaper about the water conditions [2]. Despite the dubious declarations of the city’s mayor and the lack of official declaration, the documentary makes an effort to elicit statements from higher-level governmental authorities.

The case exposed in this film adds up to the many other sorrowful cases that made the headlines in recent years. It also adds up to a long history of drinking water contaminations, from Rachel Carson's 'Silent Spring' in 1962, to 'Erin Brockovich' or the Flint water crisis, throughout to 'Dark Waters', and once more evidences that public control of criminal corporate cover-up remains systematically weak. As is commonplace such histories are blurred by court cases or smear campaigns partly aimed at watering down responsibilities. Professor Edwards’s reputation has been called into question since his involvement in the Flint crisis [7].

(with contributions from Gaëlle Cabaret and Julio Mancilla)

[4]          « HaloSan In The Drinking Water Of The City Of Denmark, South Carolina », The Berkey. https://theberkey.com/blogs/water-filter/halosan-in-the-drinking-water-uses-and-side-effects (consulté le nov. 26, 2020).