A world without water 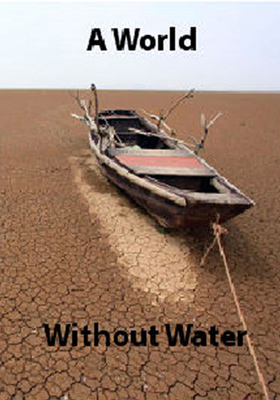 Altiplano, Bolivia: a story of hardship lived by poor families which have been cut off from water access (right in front of their house) after the privatisation of local water resources by a big multinational water corporation. Rajasthan, India: the fate of local subsistence farmers who are witnessing the drying up of their wells after the Coca Cola corporation set up their industry in the vicinity and are extracting water relentlessly from local aquifers. Detroit, US: families fighting for their right for water after failure to pay manifests itself in a complete denial of access.

What these stories have in common is that they zoom in on how privatisation and water pricing has influenced water governance around the world and who the winners and losers are from this development. 'A world without water' gives a voice to those who are often overlooked and documents the deprivation of the economically weak from their fundamental human right to water. It successfully links private fates with broader trends in water governance, neoliberalisation pressures and rising water conflicts. Different commentaries by water experts, environmental activists, politicians, as well as by the multinational corporations in question are skillfully blended to provide a more comprehensive picture of the issue at stake. The key narrative of this documentary is clear: it is a warning against the risks of the well-propagated commodification of water approach that plays into the hands of multinational corporations. Water access is an increasingly pressing issue, with climate change and population growth putting further pressures on freshwater resources, but is pricing water the right solution to this growing problem?

The main issue addressed in this documentary is the commodification of water and how privatisation and water pricing has influenced water governance around the world, creating winners and losers. The alleged reasons for commodifying water are plenty: greater investment, more efficiency and better management (Bonnardeaux, 2009). Yet, a key statement made in the documentary is that privatisation will ultimately not work for people because of its profit-making dynamics: when profit-making is regarded as the most important, people who can’t pay for water will not get water and this, in turn, can lead to social unrest. Indeed, according to Nickson and Vargas (2001), the poorest sectors of the population are in general the most deprived of water services. This is also backed by Checchi et al. (2009) who agree that "disagreement with privatisation is most likely when the respondent is on a low-to-middle income and when it involves a high proportion of public services, such as water".

Worldwide, the greatest water problems occur in places where the government is too weak to either provide adequate services or to regulate private companies (Wolff, 2014). The Bolivian case addressed in the documentary highlighted what can go wrong in badly implemented privatisation. It is shown that local authorities encourage citizens in need to connect illegally to the (privatised) piped network. A resolution on civil disobedience helped those who were unconnected to piped water getting connected, as social discontent was so great that it was virtually certain that the multinational  (Aguas Illimani) would leave. After the multinational left, the connections would be legalised. It is an example of how local authorities or civil society increasingly organise to help people in need and their interests. "These are important lessons for organisations seeking to increase their involvement in integrated water resources management across the world, and agencies seeking to improve participation and representation" (Bustamante, 2004). Moreover, Bustamante points out that "conflict could have potentially been avoided if the privatisation process had involved strong participation, dialogue and agreement between all the parties involved". She notes that social participation, public access to information, and transparency are fundamental and that the exclusion of the population from the decision-making process creates a basis for the emergence of problems and conflicts.

The documentary contributes to spreading a misconception related to 'water wars'. The probabilities for tensions increase when more actors are involved, when there are conflicting interests or when the rate of change within the basin exceeds the institutional capacity to absorb that change (Wolf, 2007). The documentary claims that there are wars already taking place over water. It is true that a wide range of conflict appear throughout history, however, according to the definitions of war, traditional wars waged over water resources alone are extremely rare (Gleick, 1993).

What makes the documentary stand out is its masterful narrative that links all pressing global water trends together: through the careful selection of a wide array of interviewees, the painful struggle of marginalised communities is vibrantly documented and gives a more humane face to the rather elusive concept of commodification and privatisation. Its interlude to link to neoliberalism is artfully positioned, using a more comic-style approach, to explain the historical underpinnings of current events. It challenges the validity of neoliberalism as "an ethic in itself, capable of acting as a guide to all human action, and substituting for all previously held ethical beliefs" (Harvey, 2007).

An -overall- impressive documentary that makes the viewer question what the real price of water is.

Nickson and Vargas (2001). The Limitations of Water Regulation: The Failure of the Cochabamba Concession in Bolivia.

Harvey (2005). A brief history of neoliberalism.

The documentary reveals the constant issue and risks of poverty and water stress and refers to two specific themes that drastically shape some of the landscape of the global South. Since the 80’s the neoliberal thought of privatization has influenced many parts of the world (Castree, 2010) and has led to successes but also difficulties particularly with water. Water scarcity and stress will become more important in the next few years as the resource is finite and the world population is growing. This leads to decreasing water per capita, and consequently, water crises are emerging.

Over the last few decades, water has become the subject of global and neoliberal policies (Swyngedouw, 2006). In the documentary, neoliberal policies refer to policies favouring the free-market distribution and deregulation of water. By 2003, the World Bank had recommended Dar es Salaam’s water utility (DAWASA) to make improvements to attract private sector investments (Budds & McGranahan, 2003).

Dar es Salaam, Tanzania is depicted in A World Without Water as a community where low-income families lack access to affordable fresh water and sanitation. Locals can dig wells, but due to the lack of a sewage system, the groundwater is contaminated. Populations can also purchase buckets of water from informal vendors. The arrival of a British water company, which took control of the capital’s water, did not improve the situation for low-income families. On the contrary, prices increased heavily, leading to more demand for the informal water bucket vendors, who, consequently, increased their prices too.

Some critics believe that the World Bank recommendations came without financial assistance to DAWASA, which did not create the improvements necessary for the private sector (Budds & McGranahan 2003). The documentary argues there are several issues with privatization or “accumulation by dispossession” as Harvey would put it. The main overarching problem is that privatization leads to a price increase, causing low-income families to run dry.

Due to these rising issues caused by the neoliberal ideology, the World Bank has been facing heavy criticism as the poor people will not be able to participate. The documentary argues this leads to more people without access to water, that can even because children being sent to work for the family to afford access to water.

The documentary portrays a family in Bolivia, who must walk a mile to fetch water from a polluted well as they cannot pay the access fee to the official network. But this polluted water can cause many diseases. Diarrhea is very common and is the third leading cause of death, after pneumonia and preterm birth complications, for children under 5 (Dadonaite, 2019).

Yet, the family lives right next to a water treatment plant run by Aguas del Illimani. Studies argue there was no major improvement in water access for the population of El Alto and other urban areas in Bolivia after the privatization (Barja, Urquiola, 2001). The desperation of the poor led to long and often public protests in 2005 causing the contract between Aguas del Illimani and the Bolivian government to be cancelled (William Finnegan, 2002). This case shows how crises are expected to increase due to a lack of water access.

A World Without Water also highlights the connection between the developed and developing world through the food they choose. Dr Bruce Lankford raises the issue of water export through virtual water trade which can lead to strong tensions in the exporting country and has in the literature been thoroughly discussed (see Dell’Angelo et al, 2018; Kapp 1963/1978; Gerber, 2016).

Jakob Tompkin of Water Watch goes even as far as saying that water wars are already happening (A World Without Water, 2006, 21:00-21:35) but this conception has, in the hydro political literature, been proven wrong (see Shelby, 2005; Dell’Angelo et al, 2018) as the definition of war requires at least one sovereign state to be involved in violence or military confrontation (Dell’Angelo et al, 2018).

Since the documentary’s release, the tide has appeared to have turned on privatization. A report by the Transnational Institute (TNI), Public Services International Research Unit and the Multinational Observatory concludes that 180 cities and communities have recently “re-muncipalised” their water systems  (Emanuele Lobina & Satoko Kishimoto, 2014). However, with the number of people living in water stress globally still on the rise, the effects of this development are yet to be observed.

Nevertheless, the documentary adds value to the discussion in highlighting the conflicts that are fought out on a local level in different locations all over the world. Hopefully, policymakers will take inspiration from the disastrous consequences of privatization.

In 75 minutes, Woods convincingly shows the outcomes of a wave of privatization attempts of common water resources. Images of a young Bolivarian girl who, in her own words, does not have “any friends because we don’t have water at home”, lead to feelings of compassion and exasperation. Her parents explain that a French company constructed pipelines below their street but that the connection fee was as much as her father’s yearly salary. Experts, accompanied by upsetting imagery and the descriptions of eyewitnesses, reaffirm how privatizations have not resulted in increased access, but dried-up reservoirs, public urination and even child mortality.

The film excels in documenting the collective desperation of people in countries as heterogeneous as Bolivia and the United States. Although the documentary offered the representatives of several companies a platform to reflect on the issues presented in the documentary, their arguments are unlikely to convince many viewers. Positively, their inclusion within the documentary facilitates a lively debate with a contrasting cast of characters, through which several sides of the issue are touched upon.

Unfortunately, the documentary does not provide appropriate, long-term solutions. Nationalization of water resources and infrastructure is mentioned but does not ensure effective distribution of water resources. It leaves the viewer longing for solutions, for which the viewer should turn to scientific literature. An example is Budds & McGranahan’s 2003 article on water privatization debates. However, this is only a minor flaw of an otherwise enlightening and necessary documentary about access to water resources.

Budds, J., & McGranahan, G. (2003). Are the debates on water privatization missing the point? Experiences from Africa, Asia and Latin America. Environment and urbanization, 15(2), 87-114.

Dadonaite, B. (2019). More than half a million children die from diarrhoea each year. How do we prevent this? Our World in Data. Retrieved January 18, 2021, from https://ourworldindata.org/childhood-diarrheal-diseases#:%7E:text=Diarrheal%20disease%20was%20the%20cause,pneumonia%20and%20preterm%20birth%20complications.