Groundwater: To enact a law for the common good 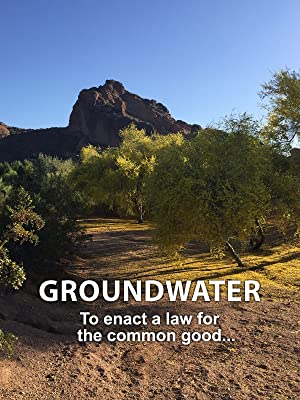 Groundwater: To enact a law for the common good (2015) traces the history of the passage of the Arizona Groundwater Management Act, still considered today as one of the most important water laws in the United States. Enacted in 1980, it prohibits the expansion of farmland, requires an assured 100-year water supply for new residential development, limits the drilling of new wells, and imposes mandatory conservation requirements.

Located in an arid environment with limited water resources, Arizona experienced an economic and population boom in the aftermath of World War II. Until 1980, the three principal water users - intensive irrigated agriculture, copper mining, and municipalities - were pumping relentlessly from desert aquifers with very low natural replenishment rates. After decades of speculation on land and water, in the 1960s, Arizona is on the verge of an economic, social, and environmental disaster. The water tables are so low that conflicts arise between users, threatening the region's economic growth. Major subsidence problems are also emerging in agricultural and urban lands.

In this context, decision-makers are forced into establishing a regulatory system to allow the sustainable use of groundwater, especially since the federal government makes it a condition sine qua non for the funding of the Central Arizona Project (CAP). Construction of the CAP - a 500km long canal supplying Arizona with water from the Colorado River- began in the 1970s.

This 26-minute documentary film is directed by Michael Schiffer and produced by Kathleen Ferris, who played herself an important role in the elaboration of the Groundwater Management Act as the director of the Arizona Groundwater Management Study Commission. Thirty-five years later, she interviews key stakeholders about the behind-the-scenes negotiations that led to the passage of the Act.

Since these measures are in place, groundwater depletion in Arizona has been slowed dramatically. However, the end of the documentary opens up on the current challenges regarding groundwater management: climate change and extended droughts, population growth and rapid urbanization and how they will require again leadership and compromises in a collective effort to adapt to a world of less water.

This documentary addresses groundwater governance issues, a crucial theme today, as dependence on groundwater has increased forcing water managers and policy makers to pay attention to both groundwater quantity and quality (Megdal, 2018).

The film is easy to access and has an educational dimension, especially in its first part before we dive into the complex water politics of the 1970s-80s in Arizona. The narration is lively, with many touches of humor from the voice-over or the interviewees themselves, lay people as well as important water stakeholders. The key players in the passage of the Groundwater Management Act are now mostly over 80 years old. Kathleen Ferris says she regrets not having started her project earlier in order to be able to collect the memories of a larger number of participants, water lawyers, lobbyists, politicians... In the film, those still alive take pleasure in recounting their experience at the heart of the political drama of the time, between low blows, tricks, improbable alliances, and infinite negotiations. Their story is reminiscent of Roman Polanski's movie Chinatown (1974) but with a happy ending. The cross interviews between the different stakeholders (Agriculture, Mines, Municipalities) are interesting in that they perfectly justify the nickname "water buffaloes”, given regionally to decision makers in water management: "there are a lot of theories about how the name evolved. Some say it’s because they were just a bunch of grumpy old men. Some say it’s because, like the water buffalo, these Water Buffalos plodded along and would not be deterred from accomplishing their goals" (Wilson, 2004).

By showing the dynamics of a successful high-level political negotiation between completely opposing interest groups, this documentary is not only inspiring for scholars working on water governance but more generally for anyone interested in preserving democratic decision-making in the context of political polarization that has greatly intensified around the world.

However, at times, the documentary is on the edge of falling into blind praise of the Groundwater Management Act, as the law that "saved Arizona". Thirty-five years later, this laudatory narrative is still the local official discourse. It often serves to explain the absence of restrictions on water consumption in Arizona that a state like California must regularly set up during peaks of drought.

At some point, the voice-over mentions how slowly but surely the law has been weakened under pressure from lobbies, particularly the real estate one. It would have been interesting to learn more about those limits to the effective implementation of sustainable groundwater management, especially as cities like Phoenix or Tucson are far from being “sustainable” (Ross, 2011; Benites-Gambirazio, 2016). The last interviewee, a farmer in the Phoenix suburb of Goodyear, is the one raising the most provocative thought on what are the next steps to control water use: regulating the frenetic urban sprawl in the desert. Finally, the documentary does not explain how rural areas were left aside the Groundwater Management Act leading today to issues of overpumping and unequal access to water.