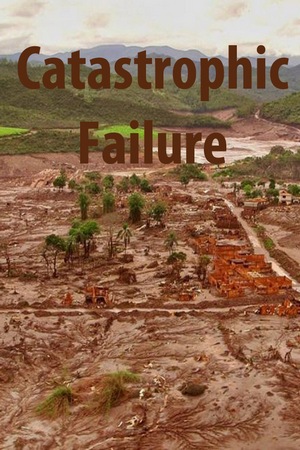 ‘Catastrophic Failure’ is an ABC Australia investigative documentary of the Fundao Dam failure in Bento Rodrigues- a small community in Mariana, Brazil. The dam contained 15 million cubic meters of tailings (waste) from an iron-ore mine under the control of Samarco, also half-owned by Anglo-Australian Company BHP Billiton and Brazil mining company Vale. The dam burst on November 5th, 2015- only 10-15km away from Bento Rodrigues, which completely devastated the community.

Mining companies Samarco, BHP Billiton and Vale came under scrutiny for not responding to problems with the dam (which were allegedly reported years before the dam burst). There were no early warning systems in place, in fact, most of the civilians heard about the coming crisis through a woman driving her motorcycle through the town, as she received news via radio. The documentary explores the aftermath of the crisis in the lives of the civilians, and takes a closer look at the preventative measures that could have been put in place by the mining companies.

The film opens with a re-creation of the day the dam burst. It shows a lady named Paula Alves, who was driving her motorbike on her way home. Paula heard news of the dam bursting on her radio. She immediately turned around, back up the main street to warn everyone.  A few other survivors retold their experience, all of them emotional upon recollection.  The remainder of the film comprises of interviews with more survivors, and comments from experts and government officials based around this catastrophic failure.

Since this was produced by news agency ABC, it is not surprising that this film is reportative in style. The film follows the presenter, Ben Knight, interviewing survivors of the flood as well as environmental representatives, BHP Billiton Manager and a water engineer. A large amount of screen-time is given to telling the story of the civilians of Bento-Rodrigues in their own words, and only snippets of one interview with the managing director of BHP Billiton is shown. The other companies, Samarco and Vale were hardly represented in the film, with Samarco workers appearing very briefly showing improvement systems to implement early warning systems.

Investigative news stories in general have tendencies to ‘shock’ viewers and may even sensationalize an event or topic by exaggerating its impact. In my opinion, this film does not do that: the event is shocking in its own right. The producers merely replayed live footage of the bursting on the day through civilian camera phones- showing sludge travelling through the villages; showing pictures of demolishes houses; and picture displays of those who lost their lives.

What should we think about the problem?

There is no explicit message about what to think, but there is an overt scepticism of the mining companies involved in the crisis. The first indicator of this is the language used to describe how people died: people were killed, as opposed to ‘losing their lives’ or any other euphemism to incite neutrality. Viewers can therefore be led to villainize the companies, which is understandable because according to the evidence, this issues were well-known, and the catastrophe could have been avoided.

The film can also lead viewers to feel sympathy for the survivors, through the deeply personal accounts of those who lost family, and particularly in the case of Priscila Barros, a survivor who lost her unborn child. The very last clip strategically placed at the end of the film- ended with Priscila responding to her ongoing case in receiving compensation for her unborn child. She says:  “I will fight for my rights. They shouldn't think they can come and shut me up. They will not”. This can invoke viewers to develop a defensive position on behalf of the survivors, and subsequently develop an aggression toward the mining companies.

The disparity in representation in the film is also evidenced by the fact that BHP CEO Andrew Mackenzie is the only spokesperson for the dam failing. Furthermore, representation from Samarco was limited, with their appearance in the documentary lasting all of a few minutes out of the 44 min documentary.

Perhaps the timing of the film had not been ideal. The dam burst in November, to which many news stations covered the story. ABC Australia decided to further investigate, assumingly because of the direction affiliation with BHP Billiton as an Australian company. Catastrophic Failure was filmed and aired in February, leaving 3 months for people and the companies to re-cover from the crisis. Some may say this is ample time to ‘be ready’ for a televised interview.

There are many positive aspects of this film: It is highly informative and thorough in its coverage of the crisis and what could have been done to prevent it from happening. It depicts the emotional pain and trauma of the survivors well, and clearly makes an effort to tell their stories, since they were the ones effected most.

The mining companies were effectively scrutinized through the use of targeted professionals: engineers, government officials and scientists to show that a) the dam structure was unfit; more attention should have been given, b) Samarco did not have adequate risk-management measures put in place and c) there were toxic substances in the sludge which can cause environmental degradation and health risks. This coverage also highlighted how social factors can be overlooked in the pursuit of economic advancement.

The film also unearths the dynamics between the mining firms. BHP admits in an interview after a private investigation that it did not know about structural weaknesses in the tailings dam (ABC Australia The World Today: 2016), which in itself is negligence- but, Samarco, as a certified mining company, with a dam so close to villages should have received more scrutiny and investigation in the film.

The natural response for any viewer could be to demonize the BHP CEO, as he had the largest amount of screen time, and was essentially the only spokesperson at the time. This of course has changed now, with Samarco and Vale being more vocal about their part in the crisis and their compensation plans. However, someone viewing this film with no intention of follow-up or individual investigation may hold onto that narrative, which does not entirely represent the whole truth.