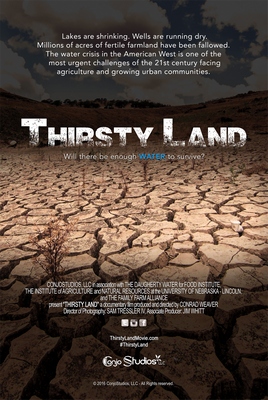 The documentary released in 2016 tells the story of how the drought across the western United States impacts the agricultural sector and other communities, and the devastating effects the drought may have if it worsens. The documentary features interviews with a variety of stakeholders at different levels, including farmers, governing actors and those worst affected by the drought in vulnerable communities.

The problem illustrated in the documentary is the general notion that decreasing water supply in the western states of America cannot sustain current practises, both agricultural, domestic and industry based. The main party shown to suffer is the agricultural sector, namely the individual farmers themselves as water stress is threatening their livelihood. However the documentary also goes onto explain how farmers suffering will have adverse effects elsewhere. The film concludes that to deal with this water stress the public must consume significantly less water. It also calls for cooperation between the domestic, industrial and agricultural sectors to effectively manage the limited water supply.

Although the majority of the film is focused on farmers as the victim, perhaps the most emotive part of the film is a segment showing communities where the water has been cut off due to water stress. A local community member who faces the task of having to collect her own water, specifically refers to the people most at risk as “the elderly, people that are sick with cancer and little babies”. The interviewee herself is also shown to be someone suffering due to the consequences of the drought, a retiree whose husband is sick so she must manually collect water herself.

Who is to blame?

In terms of who has caused the problems discussed, there is a varying degree of blame depending on the interviewee spoken to. Some farmers mention freshwater being “taken” from them and put into the estuary, according to one of the farmers it has been wasteful as “fish populations are still plummeting”. However the film fairly interviews someone representing the “Restore the Delta” project to provide a counter argument to this. Among the raft of farmers interviewed a general sense of resentment towards the public is detected, which could be interpreted as blame. One Californian farmer says “you guys [the public] are eating our water”. In terms of framing this is a powerful statement, the ‘you’ delegates responsibility, and the use of the verb ‘eating’ makes the link between water and a resource that is consumptive which is often not seen. This is effective in persuading viewers to conserve more water, however perhaps slightly misleading, as it ignores the fact that a lot of California’s crops are exported elsewhere.

The question of who causes the problem feels fairly unanswered, however the question of who didn’t cause the problem appears clear – the farmers. This is likely intentional for a number of reasons. The film addresses that farmers are often ‘scapegoated’ as a blame for water stress, perhaps this blame has been intentionally not shifted elsewhere, as they want to end what is known as the ‘blame game’ by instead focusing on how it can be fixed. More cynically, it could be interpreted that the film intentionally bypasses an examination of the causes because the agricultural sector (not the farmers) genuinely is to blame for the western US’ water issues. The assertion is evidenced by a lack of specific facts and figures regarding agricultural versus domestic water use.

Arguably one the biggest strengths in the documentary is in how it has dramatized the issue. Environmental issues may often not be at the top of people’s agendas or perhaps the most glamorous issue. However through choices of music, emotive interviews and startling images of quite literally ‘thirsty land’, the documentary has successfully put across the feeling of urgency to the viewer and made them care. As stated on its own website, the documentary had the aim of motivating the audience to conserve water. In order to do this, the audience must care about water and understand the severity of the issue. The viewer is emoted not only by filming techniques but also by the scenes featuring vulnerable communities.

Farmers or the agricultural sector?

It can also be said that the film-makers aimed for the viewer to feel sympathy and admiration towards the farming community. Director Conrad Weaver recently directed another documentary, ‘The Great American Wheat Harvest’ and assistant producer Jim Whitt grew up working on farms and has a degree in animal science. Both may thus affiliate themselves with the American agricultural community.  This assertion is upheld by the portrayal of farmers throughout the film.

For example, one interviewee states that farmers make all effort to conserve water to grow the food that “our nation is dependent on”. This plays on the nationalist pride many Americans have and therefore successfully frames the farmers as a heroic group. Although again this may be slightly misleading, the documentary also acknowledges the fact that these states are big exporters of agriculture, “supplying 90% of world’s almonds” raising the question, is this an appropriate use of a limited resource?

One of the primary solutions suggested is increased conservation efforts from the public. In a poignant concluding scene member of the University of Las Vegas describes water as “a basic human responsibility”. She reframes the discourse of water as a human right, by also saying “I don’t have the right to waste water”. Earlier in the film, a farmer says the public must “realise the connection between turning their tap on and this place here”. It could be said the documentary aims to achieve that connection by visually illustrating it through the film.

“The solution isn’t a silver bullet, it’s a mosaic”

The quote by one interviewee re-iterates that a dominant theme of resolutions is a call for cooperation between the interacting parties. From this perspective the film is perhaps limited as it does not list specific solutions but instead infers to overarching principles. The question of how this cooperation will be reached remains unanswered.

Various interviews infer that although many things will have to change to adapt to water stress, farming will remain the same. Suggested by the statements, “Cities will have to help farmers buy the latest state of technology… in order that they can grow the same amount or more food using less water, those are the givens” and “the food part isn’t going away”. This shows how the documentary has tried to move the discourse of agriculture out of the realm of debate. In terms of helping the producers achieve their own objectives this can be seen as a strength; however, it also limits the possible solutions towards the problem they have raised.