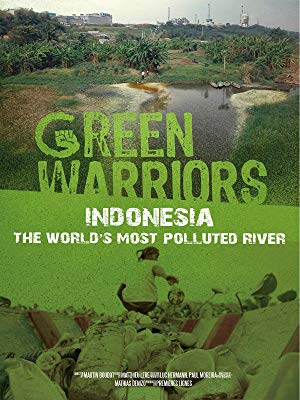 Green Warriors Indonesia: The World’s Most Polluted River is a film by Martin Boudot (2018) that investigates the impacts of the pollution of the Citarum River in Indonesia. The film highlights the implications of textile factories’ poor wastewater treatment practices on public health, and shows how these are partly driven by the consequences of the unequal power dynamics between the factories and the multinational garment companies based in the ‘West’. Boudot challenges the viewer to increase consumer demand for eco-label garments as a way to try and address this. This analysis finds that in doing so, the film foregrounds investigation undertaken by the European reporters at the expense of contributions of local research and activism, rendering it archetypal of the “white saviour industrial complex” (Cole, 2012).

Indonesia is one of the world’s largest producers of textiles and garments, and the sector is a major contributor to the country’s gross domestic product (GDP) and exports; in 2016, garments exports totalled US $11.8 billion (World Bank 2018). The Citarum River Basin is critical to both agriculture and industry in Indonesia: home to 28 million people, it irrigates 400,000 hectares of agricultural land that produce 5% of the country’s rice (ADB 2018), while an estimated 2,000 industrial facilities are concentrated along its banks and those of its tributaries (Price 2017). This has had devastating impacts on the quality of the water, impacting both the quality of agriculture and public health in the basin, leading to economic losses estimated at over $866 million over two decades (ibid.).

Why is the river so polluted?

The film opens with dramatic music and highly emotive moments from the investigation, such as a small child speaking of how his skin burns from the heavily polluted river, introduced as the world’s most polluted. According to the film, the cause is simple: textile factories are dumping poorly treated wastewater into the Citarum River, and as a result, children get sick and suffer itchy and burning skin, while rice yields fall. The framing is reductive; it focuses on the actions of the private sector as the causes of the problem, without contextualising their actions within broader political, technical, historical or economic processes. This reductionist approach is common in water security analyses, yet it ignores the nonlinear interactions between processes in each of those and other spheres (Zeitoun et al. 2016).

While the textile industry undoubtedly contributes to the river’s pollution, a 2013 report by the ADB found that 64% of chemical oxygen demand from pollutant discharge per water use in the Upper Citarum River was produced by domestic and municipal activities, primarily a lack of sewage treatment, compared to 30% from industrial activities (Kerstens 2013).

Is the Citarum really the world’s most polluted river?

No research is cited to back up this claim; a farmer is filmed saying, “They say that the river is the most polluted in the world,” and the phrase is passionately repeated throughout the film. The answer is that it’s impossible to know based on available data; most likely, the claim is simply a tactic employed to increase viewership.

Boudot takes water samples from the river near to three factories’ water outlets, and presents the analysis as if the chemicals identified are clearly attributable to the factories in question. However, this glosses over the fact that a key challenge in holding polluters accountable is that many pollutants are diffuse; they cannot be traced to a single source in a river catchment, but rather, come from many sources (Cooper 2018). Thus, once the water leaves the factories’ pipes, it becomes impossible to adequately attribute the pollutants to a specific factory, a challenge the film ignores.

What is being done by whom to address this pollution?

No documentary can present the full scope of a complex problem, and Boudot’s work is not most problematic for its over-simplification of scientific processes. The bigger problem is the film’s presentation of Indonesians as powerless victims in whose service the courageous European risks his delicate olfactory system. The film claims the country has only a single environmental association in the region, and presents their analysis of the river’s pollution as if it were the first of its kind. This is false. In the documentary, Boudot asks a farmer if he has ever tested his rice before, and he replies no. Boudot does not ask Professor Sunardi, who runs the environment studies laboratory at the Institute of Ecology at Padjadjaran University, whether he has tested rice samples from the area before (he has). Nor does Boudot acknowledge the Institute’s work as part of the Coalition Fighting Against Industrial Waste, which also comprises three local environmental groups and Greenpeace Indonesia.

The film shows a national government official saying they may increase the number of chemicals for which wastewater must be tested, presented implicitly as the result of the film’s investigation. This is emblematic of the “white saviour industrial complex” coined by novelist Teju Cole (2012), wherein a “nobody from America or Europe” can go to a developing country and “become a godlike saviour or, at the very least, have his or her emotional needs satisfied” often under the guises of “making a difference”.

The Indonesians involved are not so helpless, nor the solutions so simple, as the film implies. Research conducted by the Coalition found that 2,300 acres of rice fields were contaminated with heavy metals from factories’ discharge, causing economic losses of an estimated $866 million over two decades (Martinez 2017). The Coalition successfully took one local government to court to demand the rescindment of discharge permits to three textile mills on the banks of a Citarum River tributary, yet this victory was not clean cut; the textile owners argued that to close their factories would result in the loss of 90,000 jobs (Martinez 2017).

Overall, the documentary increases awareness about the dire state of a critically important river, and may help improve Western audiences’ understanding of negative consequences of the global supply chain, particularly the chemical consequences of the garments industry. At the same time, Its implicit claim to a small victory for the people without mentioning the research and activism of multiple Indonesian groups dangerously contributes to perpetuating white saviour complexes and stereotypes of Indonesia as underdeveloped, while missing the opportunity to encourage viewers to take concrete actions to call for realistic policy solutions that would support Indonesian activists in their work, instead of eclipsing them.