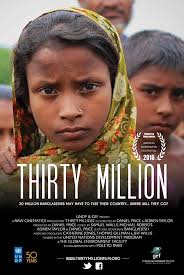 Bangladesh, home to 160 million people, is often described as the land of water.  Within the borders of Bangladesh, the Ganges, Brahmaputra and Meghna rivers combine and form the largest delta in the world as they empty into the Bay of Bengal.  The vast and highly populated alluvial lowlands make Bangladesh extremely vulnerable to climate change induced sea level rise.

In 2016 the 32-minute non-commercial documentary “Thirty Million” (Price and Taylor, 2016), financed by the United Nations Development Programme (UNDP) and supported by the Global Environment Facility (GEF), explored the implications of sea level rise for Bangladesh.  Dr Daniel Price, a climate change scientist from the UK, and Adrien Taylor, a television journalist from New Zealand, co-directed the documentary. The aim was to give a voice to thirty million Bangladeshis that studies at the time of filming indicated could be displaced by a 1m rise in sea level by the end of the century.  It is noted that subsequent studies, using more accurate modelling methods, indicate that the population at risk of displacement may not be as high as thirty million.

The documentary successfully raises awareness of the impact of storm surges, saltwater ingress and land erosion exacerbated by climate change-induced sea level rise.  However, there are other reasons for water insecurity in, and displacement from, coastal Bangladesh which are not specifically covered.  This is understandable given the documentary’s climate change focus, but it may leave some viewers with an inaccurate impression of the situation.

The interviews with Bangladeshi and international scientists, environmentalists and politicians are skilfully combined.  While there is a good range of interviewees the key message of the documentary would have been stronger if there had been further interaction with people living in coastal communities.  Nevertheless, all the interviews are illustrated by the excellent camerawork and aerial videography of Michael Roberts and Samuel Walls, which captures both the vibrancy and struggle of life in Bangladesh.  The carefully selected footage assists in linking the individual interviews and therefore strengthens the documentary’s key narrative – those most vulnerable to climate change are already facing the consequences and developed countries, who have caused the issue, therefore have a responsibility to act now.

The documentary initially concentrates on the causes of climate change – a global issue with global implications.  Appropriately therefore, the viewer looks down at Earth from space as the music quickens and the narrator starts to describe the speed at which the industrial revolution has transformed the planet.  The increased amount of carbon dioxide in the atmosphere has caused global temperatures to rise, glacier / polar ice to melt and the oceans to expand.  The scientific overview provides an appropriate level of detail for a non-technical audience, and the accompanying graphics demonstrate that the science is advanced and well understood.

Dr Atiq Rahman (Executive Director of the Bangladesh Centre for Advanced Studies), concisely summarises the water issues that his country faces: “too much, too little, wrong timing and wrong type.” Alamgir Hossain (UNDP Bangladesh) describes the “irony” that Bangladesh has so much water, but in one part of the country “two million people are suffering from lack of access to safe drinking water.”  This resonates with the viewer and helps to communicate that flooding is not the only issue.  Saltwater, drawn inland by the slow steady rise of the sea and sudden storm surges, is causing deterioration of freshwater sources.  The significance of this would have been heightened through interviews with local people, to express how use of saline water affects their daily lives, for example: diarrhoea, vomiting, loss of appetite, thirst, bleeding in the throat and skin rashes (Lam et al., 2018).

As the documentary continues, Runa Khan (Founder and Executive Director of Friendship) describes how the storms that track in land from the Bay of Bengal have become a “question of life and death” for those on the coast.  The footage and music reflect the storm – building to a crescendo as the storm peaks.  A man carrying a goat frantically wades through the flood water that is sweeping through mud buildings, while the face of a small boy depicts both fear and vulnerability.  The subsequent calm after the storm is broken by the realisation that homes have been lost and lives have been changed.  Runa Khan explains how people restart projects “twenty times, thirty times, forty times in their life” and provides the rhetorical question “what amount of strength do you want from these people?”  The pathos of this is accentuated by the accompanying image of a young boy, slight in stature, with a resigned and tired expression.

With the full impact of storms fresh in the viewer’s mind, the documentary choses this impactful moment to state that a 1m rise in sea level could displace up to thirty million people.  This staggering figure is similar to those in World Bank assessments, including one from 2014 which used contour maps to estimate that 17% of Bangladesh’s land (26,250km2) could be inundated by a 1m rise in sea level (Paul and Rashid, 2016).  However, polders (man-made embankments) designed to protect coastal areas from the sea do not appear to have been accounted for in these studies.

A more recent study by Davis et.al (2018) was able to account for polders by using topographic data from the Shuttle Radar Topography Mission (SRTM).  The study found that, even for a potential 2m rise in sea level, the estimated inundated areas and displaced population would be 2,550km2, and 2.1 million respectively (significantly smaller than the studies available at the time of filming the documentary).  This more recent modelling raises the question over whether the estimate of thirty million, that the documentary takes its name from, was overestimated and highlights how facts presented in documentaries can only be as accurate as the studies on which they are based.

Adaptation efforts, such as modified varieties of saline resistant rice and shrimp farming, are being implemented.  The documentary describes the UNDP’s “Forest, Fish, Fruit (FFF)” initiative which has formed mounds and ditches to create ponds for fish farming alongside the planting of vegetables, fruit trees and mangrove forests. This provides alternative food sources, as well as wood and some protection against storm surges.  Despite these efforts, Paramesh Nandy (Coastal Afforestation Project Manager) notes that “if the sea level rises, these activities, what we are doing, it is valueless.”  The documentary, funded by the UNDP, is understandably keen to promote their successes, but wants to clarify that these do not resolve the overriding issue.  This can only be achieved if developed nations address their greenhouse gas emissions.

There are other reasons for Bangladesh’s water insecurity that are not specifically addressed in the documentary.  For instance, high concentrations of arsenic have been measured in groundwater in southern Bangladesh (Shamsudduha, Taylor and Chandler, 2015).  Furthermore, 92.5% of surface water enters Bangladesh from upstream riparian states, meaning that water availability can be heavily dependent on water use in India (Kolås et al., 2013).  The documentary does not discuss these issues, perhaps to avoid over-complication and to keep the content accessible to its intended non-technical audience.  However, this may also create an inaccurate impression that sea level rise is the sole reason for the region’s water insecurity and outward migration.

A key strength of this engaging documentary is in the wide array of articulate interviews skilfully pieced together by Dr Daniel Price and Adrien Taylor to give a voice to coastal communities.  The key narrative – that developed countries must understand the issues, accept responsibility and act – runs throughout and is particularly clear as the interviewees speak passionately about the plight of Bangladesh.  For instance, Helen Clarke (UNDP Administrator) highlights that Bangladesh “did so little, if anything, to contribute to the stock of carbon”, while the viewer can feel genuine emotion in the voice of Monica Jahan Bose (Environmental Lawyer) as she says “love your neighbour, take care of each other, and be responsible for your own actions.”  The documentary strikes a lasting chord with the viewer through the inspiring words of Dr Atiq Rahman: “We are all in it together. We all swim or all sink. There is no plan B, there is no planet B. This is all we have.”