I am the river. the river is me 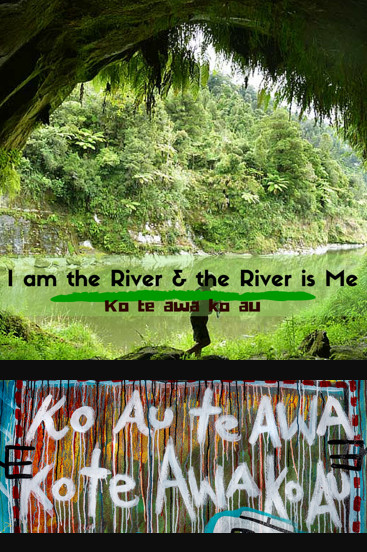 The documentary highlights the unique case of awarding a river legal personhood. The Whanganui River, located in the northwestern part of New Zealand’s North Island, received the same rights granted as a legal entity through the Te Awa Tupua (Whanganui River Claims Settlement) Bill 2017. After decades of disagreements between the government and the Maori iwi (tribes), the Crown now recognizes the river as an indivisible and living whole; the first river in the world to get recognized in such a way (New Zealand Parliament, 2017; Rodgers, 2017). The river is existential to the physical and spiritual livelihood of the Maori and they are intrinsically connected to the river (Te Awa Tupua, 2019 ; Rodgers, 2017). Te Awa Tupua describes seeing the river as an integral whole consisting of the mountains, air and sea. The documentary further sheds light on different perspectives of the river, chronicling the Maori’s views. The bill attempts to not only recognize the indigenous community under the Treaty of Waitangi but also to protect and conserve the unique nature of the riverbed. Drawing stark comparisons with the drinking water scandal in Flint, Michigan, the documentary raises awareness of how vulnerable ecosystems, and consequently humans, are, and of the need to better protect the environment from damaging human activities. The documentary concludes with a statement from a local that people create change and not the state, referring back to the guardianship of one crown and one iwi representatives to protect the Whanganui River and act on its behalf.

The scholar Stone first introduced the idea of personifying nature in 1973. Stone argues that the main reason for natural resources not having legal rights in the common legal notion is the fact that they do not have legal standing (Morris & Ruru, 2017). However, he proposed the role of guardianship to act as a representative for the river and be a beneficiary in its own right to remedy this problem. This was implemented by the New Zealand government through the appointment of two representatives for the river and the prevention of the river being sold and/or valued in monetary terms. At the core of this ethical principle lays the notion of ownership. One cannot own neither a natural nor a legal person therefore the bill rejects the anthropocentric view of conserving nature through considering it as property (Gordon, 2018). This view was depicted in the Resource Management Act from 1991 in which the local community and iwi got involved but that still viewed nature as a resource for humans rather than an entity, in its all-encompassing span, for its own sake (Ministry of the Environment, 1991).

The cinematography throughout the film is particularly powerful and one of its greatest strengths. The documentary starts by taking us directly to its subject, the Whanganui River, and its heart, the Maori, with beautiful footage of the river and a powerful voiceover from a Maori declaring, “Ko au te awa. Ko te awa ko au (I am the river. The river is me).” Within seconds, Freid immediately evokes emotion and establishes a strong connection between the river and the Maori. He then juxtaposes the peaceful imagery and sounds of the river with the highly developed city of Wellington, introducing a friction between nature and development. In this way Freid communicates a lot while saying very little. He perfectly demonstrates the clash in ideology between the indigenous people and colonists, conjuring the metaphor of the iron and clay. Geoffrey Hipango, a Maori, explains iron as being a mentality that is disconnected from the earth, as the film exhibits images of a car crossing a bridge over the river and driving through a road that divides a forest, whereas clay symbolizes the earth. The key antagonism here is the collision of two different worldviews and diverging perspectives on how nature should be managed and regarded.

The documentary misses an opportunity to assess the real impact that the bill can have on the Maori by failing to provide evidence as to how the bill can be employed to improve the rights of the Maori and the quality of the river. Questions also arise regarding what would happen in the case of a lawsuit against the river and in the case of a dispute between the Crown and the iwi representatives of the river. Even though the main stakeholders, locals, iwi and government, are included in the discussion, it does not shed light on how everything would work in practice.

Furthermore, it would be helpful to have a scientific background about the state of the river before the legislations to provide further insight on why this bill is important. Moreover, Fried should have also provided information to explain why the New Zealand government chose to go down the ethical route of assigning legal personhood and did not explore other avenues on how to view or consider nature. Regarding the unique political landscape of New Zealand with their indigenous community, it would be useful for an international audience to gain more insight into Maori practices, especially tupuna (ancestors), to fully understand the impact the bill may have on their life. The Maori way of life presents a unique and fascinating view on governing nature and on the interconnectedness of our world, which could have been more strongly highlighted in the documentary.

Overall, the film excellently utilizes emotion, imagery and factual evidence to reveal how an indigenous community was able to utilize the law to protect the river and uphold their beliefs regarding nature. Throughout the film, Fried builds strong evidence for his central claim that humans and nature are one and have an enduring connection. He expertly displays this by describing the poisoning of water and then in turn the people in Flint, Michigan, demonstrating that how we treat nature has a direct connection to our wellbeing. Ultimately, he gives form and substance to the point of view that the river is connected to all forms of nature and that all nature should be given a voice. He ends as he started, drawing on our emotions with the background music leading into the chorus of “Wade in the Water” and leaving us with the powerful message that we are responsible for speaking up for nature.

Ministry of the Environment. Resource Management Act. (1991). Retrieved from: https://www.mfe.govt.nz/rma