Belo Monte: After the flood 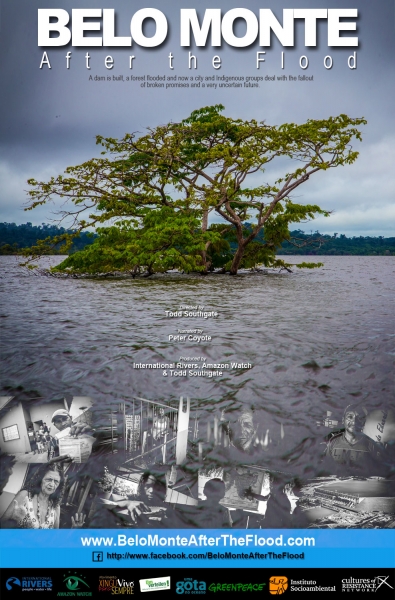 The construction of dams in an attempt to control and modify the natural variability of water for creating storage reservoirs, controlling floods, and generating hydroelectricity has a long history (Poff & Hart, 2002). One major example is the Belo Monte Hydroelectric project in Brazil which is one of the world’s largest dams and took five years and $10 billion USD to complete. The project was highly contentious and opposed by scientists, local non-governmental organizations, and indigenous peoples. Award-winning environmental documentarian Todd Southgate explores the socio-environmental consequences of the dam on the Xingu River in his 2016 film, “Belo Monte: After the Flood.” Cathartic interviews with displaced indigenous communities are artfully woven into a historical synopsis of the dam’s construction, the power asymmetries between actors, the corruption of the political forces involved in the project, and the impact it has on tens of thousands of people along the Xingu River.

Given that the documentary occasionally refers to research when making its claims, it is interesting to examine the supporting research, especially considering the generalized statements of the documentary. The documentary asserts that “Dam proponents overestimate the economic benefits and underestimate the far reaching effects on biodiversity and critically important fisheries”, based on a paper by Winemiller et al. (2016). The overall revenues are generally less than expected, and the cost are generally more than expected. This is due to the fact that upfront costs are high, positive returns take a long time to eventuate, and mitigation costs of the negative effects are higher than expected (Ansar et al., 2014). This has been shown, for example, for the case of the Bui hydroelectric dam in Ghana, where the resettlement of people led to a loss in employment or livelihood opportunities for the displaced population (Obour et al., 2016). This is similar to the trend observed in the documentary with regards to fishermen of the Xingu River who are being displaced and are unable to continue their previous work.

Aside from social and environmental costs, the financial cost of constructing the Belo Monte was quadrupled compared to the initial budget. Therefore, the argument is made by Winemiller et al. (2016) and Ansar et al. (2014) that a more appropriate cost analysis (especially social and environmental) is needed before proceeding with constructing hydroelectric dams. However, the documentary explains that the abuse of power by the Brazilian government and private construction firms allowed the dam’s development to continue, independently from the environmental assessment. This assessment was not done by independent contractors and there were many politically-motivated changes of staff within Brazil’s environmental agency. Corruption related to large-scale construction works in common in Brazil, as the Odebrecht scandal recently revealed (Colonnelli and Prem, 2017).

According to the documentary it is often well substantiated that states often failure in their communication with local people in the construction of dams. Furtado and Ravena (2019) have confirmed that there is limited dialog between developers of hydroelectric dams and the people who will be affected. Deceptive technical language is often used by the developers which is inappropriate to communicate with people with limited technical understanding.

Another claim made by the film is that hydroelectric dams do not necessarily provide clean energy. Indeed the flooding of vegetated areas lead to localized increases in methane emission, potentially making hydroelectric power an unclean energy source (Fearnside, 1995). However, the film’s claim that this is equivalent to a fossil fuel-based power plant is debatable since this highly depends on the methods used for measuring the greenhouse gas equivalent emissions (Rosa, Schaefer & dos Santos, 1995).

“Belo Monte: After the Flood” immediately strikes the audience with an emotional opening. A solemn sound of strings underlays fast glimpses of social and environmental sufferings caused by the dam - piles of dead fish, flooded forest areas, extreme poverty and homelessness. An elderly woman summarizes the situation, “I keep saying we are slaves...we can’t walk, we can’t fish, we can’t work.” The film zooms in on its social consequences in the nearby city of Altamira. Unemployment has surged as the construction boom has ended with the final phases of Belo Monte’s development. This is artistically portrayed as workers climb off transmission towers in the setting sun, signifying that their jobs have been terminated. Rising social tensions and unsettlement have led to localized violence and crimes as barbed-wire fences and homicide news stories flash across the screen with sirens blaring. How did the situation get to this?

The film continues with narrator Peter Coyote walking viewers through a historic timeline of the Belo Monte project’s development. Through snippets of news stories, legal challenges, and indigenous peoples’ protests, Peter deftly describes the massive amounts of money, power, and corruption surrounding the project between North Energy, the Brazilian government, and private construction companies. The enormous cumulative costs of the dam are illustrated as intense violins play an ominously-rising note over abrupt scenes of human suffering with the narrator concluding, “...and the social and environmental costs? They are still being tallied.”

Despite numerous scenes showing destroyed livelihoods and fading cultural traditions, filmmaker Todd Southgate does not only convey a message of social vulnerability, but also one of solidarity and strength. Many scenes show various indigenous groups rallying and chanting in Altamira, before a hearing held to denounce the ignored legal requirements during Belo Monte’s construction such as mitigation measures and compensation. These scenes depict an unequal negotiation process, with rich and powerful actors from North Energy carelessly scrolling on their cell phones during the hearings, unmoved by the determination of indigenous groups to have their rights and voices recognized. As the narrator states that "the fight... is far from over", an inspirational tune sparks hope as the fight "is larger, more determined, and involves more people than ever". In the streets of Altamira, the chanting and dancing of indigenous protesters strikes a stirring chord of inspiration as the film closes with aerial shots of the beautiful Amazon under a bright and hopeful sun.

Poff, N. L., & Hart, D. D. (2002). How dams vary and why it matters for the emerging science of dam removal: an ecological classification of dams is needed to characterize how the tremendous variation in the size, operational mode, age, and number of dams in a river basin influences the potential for restoring regulated rivers via dam removal. BioScience, 52(8), 659-668.