Xayaburi and Poyry: What lies behind 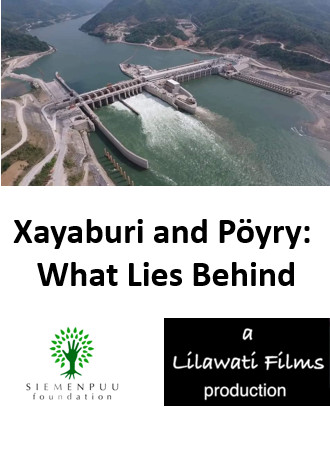 A critical activist documentary that exposes some of the spin, contradictions and barely disguised lies that have been utilised in justifying the construction of the first mainstream dam on the Mekong River outside of China, namely the Xayaburi Hydropower project in Laos. Produced by a Finnish NGO, the Siemenpuu Foundation, the film follows a well-trodden approach to covering the story of the dam’s development from inception through planning to construction, focusing on the seminal role of the Finnish engineering company Pöyry. A coalition of civil society groups file a claim with the Finnish government about alleged conflicts of interests by Pöyry, as it works simultaneously for the government of Laos and the project’s Thai corporate owners to whitewash multiple governance malpractices and design deficiencies. The case is narrated through a series of interviews with civil society critics and villagers in Thailand who stand to be impacted by the project or have past experience of impacts from existing dams. Interviews are interspersed with footage from international news media reports of the controversial dam and archive footage of a threatened river-based life enjoyed by communities, in particular the central role of fisheries to their culture and livelihoods. Electricity from the dam is to be exported to Thailand’s power grid, with Thai civil society taking a lead role in publicly opposing the project, in stark contrast to the enforced silence of Lao villagers living in the shadow of the dam. The 40 minute film was made in 2013 and the Xayaburi dam was completed in 2019, with all indications showing that many of the critics’ predictions about serious social and environmental impacts are in the process of materialising, even as new large dams are being planned and built, upstream and down.

The film does not pretend to take a strictly academic approach to the subject of Pöyry’s role in the Xayaburi dam, but rather it is an example of activist documentary making, aiming its sights at the conflicts of interest apparent, by allowing interviewed informants to reveal them.  The background narrative of the dam’s history is provided by simple sub-titles and news clips that inform the viewer of the development context of Laos as the host nation, how the transboundary dam was justified, the main actors involved, some of the relevant governance processes called upon and how these were used or abused to ensure construction. In essence it is a study of power relations unfolding between state, corporate and civil society actors in a complex waterscape (Molle et al, 2009), without need to reference underlying theory or concepts. Such an approach would be superlative and would likely lose much of the audience that this documentary is aimed at, who presumably would be other civil society advocates interested in the Mekong Region (or more widely in Asia?), and perhaps those curious about how corporate giants like Pöyry, as a flagship enterprise of a wealthy European nation with an exemplary reputation for good governance and corporate social responsibility (Salminen and Ikkola-Norrbacka, 2010), can profit without sanction at the expense of marginalised peoples and the environment in a poor developing nation like Laos, lacking fundamental democratic rights, transparency or accountability by state institutions (Sims, 2017).

The film-makers are scrupulous in interviewing a wide cross-section of critical informants drawn from different backgrounds, including an international fishery scientist with Worldfish, a Thai journalist who visited the Xayaburi dam site incognito, the Southeast Asian Director of International Rivers, a representative from Siemenpuu Foundation, an American ichthyologist, a Canadian academic with vast experience of regional dam development, a couple of Thai environmental activists and a handful of villagers; but neglect to present a single interview with a dam proponent. These alternative actors might have included representatives of the agencies of the Thai, Finnish or Lao government, the multiple financiers involved, the Mekong River Commission (MRC) river basin organisation nominally charged with responsibility for equitably and sustainably managing the basin’s water and natural resources, an executive of Ch Karnchang company, the main contractor and dam operator from Thailand, or some of the technical consultants directly employed on the project. In their defence, the producers do state that multiple requests for interview were made to Pöyry, but no response was forthcoming. But this does not explain the lacuna of the other absent voices, as it would have added a semblance of balance and allowed the viewer to form their own conclusions regarding arguments for the dam, the decision-making process applied or any defence for the environmental mitigation accoutrements, especially the fish ladder.

Indeed, it is the fish pass that emerges as the single most contentious part of the entire dam design, while other technical aspects scarcely warrant a mention. This focus is based on sound reasoning, given the overwhelming importance of fisheries for livelihoods and protein derived from living aquatic resources for sustaining the majority of the rural population of the four countries of the Lower Mekong Basin (Ziv et al. 2012). The Mekong Basin holds the single largest freshwater fishery on earth, producing some 2.3 million tonnes per annum in 2015 and comprised of over 1,100 fish species basinwide, mostly based on capture of migratory species (MRC, 2019). Pöyry was hired by the government of Laos to conduct a “compliance review”, detailing the degree to which the dam design conformed with MRC recommendations following a Procedures for Notification, Prior Consultation and Agreement (PNPCA) process, a mandatory requirement for any such transboundary dam projects under the 1995 Mekong Agreement (Middleton and Pritchard, 2016). At the same time, Pöyry was hired by the developer, Ch Karnchang to become technical engineering consultants for the dam project, opening up an immediate conflict of interest. The Worldfish scientist, Eric Baran, pointed out the glaring disconnect between the technical content of the Pöyry Compliance Report which found that at least eight out of 29 design guidance recommendations made by MRC itself had not been met (Worldfish’s own review was of the opinion that only four points had been satisfied overall), while the Executive Summary for policy makers concluded that the dam design was in overall agreement with the MRC guidance and recommended that construction proceed. Baran believes the Executive Summary to be “dishonest”. Ame Trandem of International Rivers describes Pöyry as a “hired gun” for Laos. Meanwhile, veteran Mekong fish expert, Tyson Roberts, outlines in detail why the fish pass described by Pöyry as “state of the art” is destined to fail, based on his long experience of studying the Pak Mun dam fish ladder in Thailand and other salient deficiencies related to design.

A June 2012 formal complaint by 15 civil society groups submitted to Finland’s Ministry of Employment and Economy, claiming that Pöyry had breached the OECD Guidelines for Multinational Enterprises through its conduct over the Xayaburi Dam development and its actions contravened the spirit of the 1995 Mekong Agreement. The complaint was rejected the following year. According to civil society critics, this decision raised suspicions about the legitimacy, transparency and impartiality of the process among observers, a view reiterated by the Finnish government’s own overseas development minister. For the present reviewer, a pivotal scene from the film is a panel discussion held at the Foreign Correspondents Club of Thailand (FCCT) in Bangkok, that includes Daovong Phonekeo, Director-General of the Department of Energy Policy and Planning in Laos, with regulatory oversight for all hydropower development in the country. When questioned about the ongoing investigation in Finland concerning the role of Pöyry in Xayaburi, Daovong shrugs his shoulders and simply says with a smirk on his face, “yes?”, as if to imply “so what? Do you think I care?”. The audience laughs nervously, perhaps sensing for a brief moment the performativity of the scene and realising that a lead actor’s mask has just slipped, allowing the audience to recognise what lies beneath, or what lies behind, to borrow from the film’s title. Lohmann (2006, p. 156), describing a remarkably similar scene at a seminar in the late 1990s to discuss another controversial dam in Thailand, likens such on-stage accidental slips by performers to “a fragmentary glimpse of the multiple theatre of power in which development unfolds”.

The latest FCCT discussion may be interpreted as little more than a feigned display of openness to the idea of participation and transparency by a senior representative of an authoritarian regime that has a well-deserved reputation for serious human rights abuses, including the routine jailing of political dissidents and several state enforced disappearances in recent years (United States Department of State, 2018). It is little wonder, therefore, that no Lao villagers were interviewed for the documentary. The notion that an investigation on the other side of the world into the Lao government’s favoured technical consultant could derail the Xayaburi project already two years into construction, was evidently preposterous to the Director-General.

Since the documentary was made, Laos has completed another Mekong mainstream dam in southern Laos in 2019, has conducted more PNPCA’s and is in the process of advanced project preparation for building three more mainstream dams, plus scores more large dams are destined for its tributaries. This suggests the scripted Xayaburi dam episode merely emboldened the government’s resolve to forge ahead with its hydraulic mission at whatever cost to society and the environment. While such films can be illuminating to those not overly familiar with the context, in practice they make little or no difference to the hydraulic development paradigm unfolding across the Mekong region, which appears to be largely driven by an elite’s visceral need for more dam infrastructure and the attendant financial rewards, rather than any real underlying demand for the energy they may, or may not, generate. However, the documentary could serve a useful purpose in the future, should an “Ecocide Law” ever be adopted by the International Criminal Court (Higgins et al. 2103), and corporations such as Poyry are held to account for their part in profiting from the anticipated collapse of the Mekong’s aquatic ecosystem.