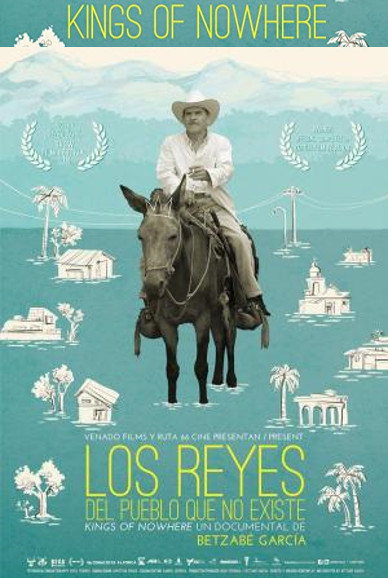 Kings of Nowhere (2015) demonstrates the problems ensuing from dam building. Directed by Betzabé García, water is interpreted as the uncontrollable yet navigable intruder on San Marcos, a small Mexican town facing flooding after the building of the Picachos dam in 2009 in Sinaloa. Eerie presentation techniques show boats navigating the ghost town; from the original 300 families only three remain. The twin significance of García’s Mexican nationality is shown first as a demonstration of a multi award-winning documentary by a global south director bringing a national perspective, such as the 2015 Golden Eye for Best International Documentary, Zurich Film Festival. Second, the experience gained by García living in San Marcos for five years. Water problems are portrayed as explicitly social through the story’s narrative of those who decided to remain in the town, and implicitly political through the underlying political conflict behind the film’s narrative. This example demonstrates wider global problems of government decisions to build dams and resulting catastrophes for those inundated or forced into poor quality resettlement (Zeitoun et al., 2019). The World Commission on Dams (WCD, 2000: 129) estimates 40-80 million people to have been displaced by large dams, this gap also showing substantially insufficient data on this significant global problem.

The cause of the flooding water is rarely referred to. The dam is briefly mentioned at the start of the film and the viewer discovers only at the end that it is the Picachos dam. Frequently the water itself seems blamed, "how could this renegade river just come along and say "Out you go, boys!"" exclaims one man. García’s reluctance to show peoples’ or government’s perspectives on the cause of the flooding is in part problematic, risking creating separation and lack of understanding between the viewer, the characters, and the wider socio-political protests about flooding and displacement. However, the presentation is likely a reflection of the complex and hidden political backdrop, purposefully "withholding important story information" (Gillespie and Toynbee, 2006: 93). The dam’s purpose was for government provision of a "thirty-year water supply" to Mazatlán city (Limón, 2018: 95), it incited socio-political and armed conflict between groups. The film commemorates the leader of the Displaced Persons of Picachos, Atilano Román, and ‘all the comuneros that have died demanding a just compensation’. Atilano was murdered in 2014 whilst on live broadcast explaining the demands of his people, and government officials promised the murder would be punished but it is not clear who is responsible (Orta, 2014). Feelings of fear and chaos are reflected in the film, one woman Yoya states "soldiers come here and go through our stuff… let’s not talk about it … the walls have ears", her husband Jaimito continues to discuss the impact of roaming gangs who "chopped up Ricardo…they attack suddenly".

García commences the story’s narrative from after the flooding, when most families have already deserted the flooded town. This is effective in demonstrating the remaining peoples’ perspective of time, that of being stuck in the past. Frequent references are made to their families who moved, and the rolling credits of the film show videos of people happily dancing together from before the flooding. Elliptical editing techniques as "omission of intervals of both story and plot" (Gillespie and Toynbee, 2006: 94), have a powerful twofold effect. First, a sense of timelessness by omitting information from before the floods, showing scene after scene of raining, water flooding, and water rising. Second, a simultaneous sense of time running out by showing the remaining families building fences and flood defences as the water annually dries up then returns and continues to rise. This portrayal convincingly shows the increasing disempowerment of the people living there.

Narratives of space and movement

The plot space is of the inundated San Marcos. The film explains that "dependent on the water level, San Marcos spends half the year inundated". García only focuses shots of and within the town itself rather than images of the dam or where the energy produced was directed. This builds a story of the town since the creation of the dam, facing growing and increasing destruction by water and underlying fear of murder by roaming gangs. García also effectively uses story space, "lead(ing) us to imagine places that we never actually see" (Gillespie and Toynbee, 2006: 96), for example Jaimito speaks about his daughter’s family who left and states the irony of them struggling to obtain water for numerous months in contrast to the inundated families who remained.

Who are the Kings?

The voices of those of who remained interpret water in two ways. First, as a navigable intruder, a hopeful view driving people to fix the town where people who left can be encouraged to move back. Second, as a barrier, a hopeless view where people claim year after year the water dries up then rises again, the town will slowly be buried in mud and therefore they might also have to leave and should not expect anyone to return. Jaimito explains "the water will decide for us" and a younger man, Miro, claims "there is no chance to do anything…I’m trapped here. I can’t leave here… Because of my parents". García’s effective emotive technique mixes both views throughout the film to demonstrate the internal conflict faced by those who remain. García also points to those voiceless in the story, as Miro notes the disruption of the flooding to animals and nature. This demonstrates the wider ecological effects of dam building, as McCully (2001: 32) asserts the responsibility of flooding inundation from dam building for habitat destruction, "ecosystem fragmentation", stranding of animals from migratory routes, and plant species which cannot survive flooding.

The WCD (2000) promoted the need for governments to develop improved participatory consultation, negotiation and compensation schemes for people affected by dam building, however this view is evidently not being sufficiently met. New methods are needed to enact multi-stakeholder participation in dam building decision-making and planning, including questioning from the outset the viability of other energy and water alternatives, as well as initiating "entry points from which varied stakeholders can participate", providing routes for academics and activists to contribute to the "highly politicised" debates on building large dams (Baghel and Nüsser, 2010: 243). Ultimately, García successfully demonstrates the socio-political issues with flooding from dam-building, adding a strong voice to the debate and a powerful call for better methods for decision-making and planning for dam-building in the future.

International Rivers, no date. Questions and Answers about Large Dams. Available at: https://www.internationalrivers.org/questions-and-answers-about-large-dams

Orta, J. D., 2014. ‘Mexican activist killed during live broadcast in Sinaloa amid wave of attacks on journalists’, Journalism in the Americas, 17 October. Available at: https://knightcenter.utexas.edu/blog/00-15782-mexican-activist-killed-during-live-broadcast-sinaloa-amid-wave-violence-against-journ