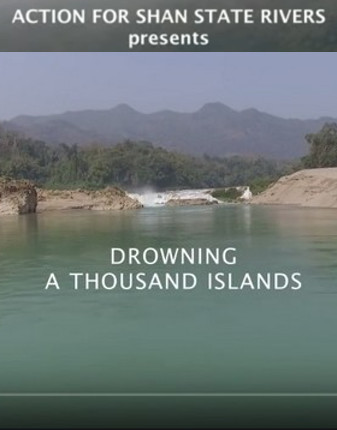 "Drowning a Thousand Islands" by Action for Shan State Rivers represents another prescient contribution to the understanding of the Salween landscape from civil society groups. The setting for the film is stunning and the footage is a rare and beautiful look at an area of Shan State that is largely inaccessible. Decades of violent conflict have embroiled the region to this day, leading to the dispossession and displacement of over 300,000 people from an area slated to be the site of the largest hydropower project in Southeast Asia. The film documents the violence and community resilience as the villagers repeatedly flee further and further from the Salween and Pang river confluence and the site of the over $6 billion Mongton Dam (previously Tasang Dam). The communities' hopes to return to their homelands are directly in conflict with the Tatmadaw (Burmese military), Chinese State Owned Enterprises- namely China Three Gorges, and the Energy Generation Authority of Thailand's intentions to flood it.

The film highlights one of the greatest concerns by regional civil society organizations (CSOs) who are all too easily dismissed as just being 'anti-dam'.  How are hydropower projects able to accurately account for environmental and social impacts 30-50 years into the future under high levels of uncertainty while not being able to address grievances of the past? The film puts the viewer in the room during environmental and social impact assessment (EIA/SIA) consultations being run by the Australian consultancy Snowy Mountain Engineering Corporation (SMEC). The participants are openly asking both the Burmese government and SMEC how the legacy of decades of displacement will be accounted for in the EIA/SIA process? SMEC responds by saying they can only count the villagers and losses that are currently present and that past residents, grievances and losses will not be included. The film highlights this tension between communities recounting their history and still hoping to return to their homelands and the hydropower proponents who are taking an ahistorical approach and sweeping the long history of conflict and protests out of their development narratives and assessments of the future. This task proved impossible in the case of the Mongton Dam as Tatmadaw tanks and soldiers rolled into the area during the SMEC run consultation process. SMEC, which was sanctioned by the World Bank Group for bribery scandals in South Asia, is the face of the hydropower project during the filming, but has subsequently withdrawn from the project. Despite all of the obvious risks, the project plods forwards with China Three Gorges staff continuing to survey the Mongton Dam site under heavy armed guard from the Tatmadaw. The increased securitization, risks to Salween communities, as well as public opposition to the project, all continue to escalate to the present day.

Yee, H.W., 2016. Implications on women’s lives and livelihoods: A case study of villages to be affected by the Mongton Dam Project in Shan State. In International Conference on the Mekong, Salween and Red Rivers: Sharing Knowledge and Perspectives Across Borders (pp. 303-333).