Time of the Titans 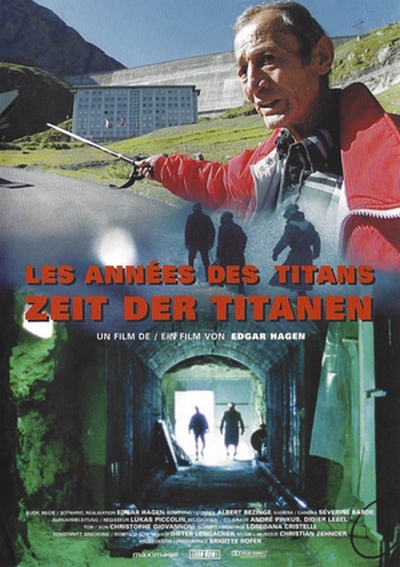 The documentary begins with a folkloric and modern tune (‘New Space Mountain’) and a low-angle shot of the Grande-Dixence dam wall. The camera slowly tilts up the wall, climbs over and above the top of the dam, and then shows a panoramic aerial view of the reservoir and the surrounding mountains, the Swiss Alps of the Valais region (or Wallis region), in winter. An intertitle then explains the focus of the film: the thousands of workers (nicknamed the ‘Titans’) who contributed to build the Grande-Dixence Dam and its network of galleries and tunnels between 1950 and 1966.

The camera follows a man (presumably a former worker) and an employee in charge of the dam maintenance, down a tunnel into a dark gallery they travel down by four-wheel drive and then by boat. The former worker begins to describe an accident which involved himself and some other workers, and describes the death of one of his fellow workers, the transportation of the victims and the wounded to the camp’s infirmary where the priest gave them Extreme Unction. When asked if he was scared to die he replies that he wasn’t afraid to die, but that he wanted to live.

The documentary continues with other workers’ accounts onsite. Many workers recall their will to distance themselves from poverty and from work in the fields and in the mountain pastures. The workers interviewed explain how they crossed Switzerland, or even Italy and the Alps, as they heard of the dam works and hoped for better salaries. They also describe the conditions of their lives in the camp and the work they did on the different construction sites (at least 15 different construction sites were established to build the Grande-Dixence Dam and its tunnels). A cook explains that he was employed to prepare meals for workers who were housed in a mountain stable; another worker explains that the work conditions were terrible; the clothing they were given was not waterproof, the miners sometimes had to sleep in the tunnels they were digging and were often sick because of the petrol fumes in the galleries; shifts were long and the work was often repetitive and some workers missed their families during the months they were away from home and living in the mountains.

The memories of the workers also highlight changes in the working conditions: trade unions forced the administration to build showers for the workers; after some time, the shacks they lived in were replaced, at the request of the Valais social services, by a building which the workers nicked-named the ‘Ritz’ (it has now been converted into a hotel). Towards the end of the documentary, the consequences of the poor work conditions are brought up through the interview of a miner’s widow explaining all the health problems he was confronted with, and through the medical appointment of a former miner suffering from silicosis – and images of his fibrescopy are shown, drawing a parallel between the tunnels he dug and his trachea and bronchi. The camera follows some former miners who go and visit the graves of some of their former colleagues who died in accidents or of silicosis.

The documentary also highlights the positive memories of the workers such as the team spirit on the work sites: a former worker explains that he found a new family on the worksite others say they felt close from home despite being immigrants; a team of former geometers explain that with these new jobs which they considered to be wonderful, they were contributing to the building of a new world. The team spirit of the workers and in particular of the miners is illustrated by scenes filmed for the documentary showing the miners singing songs (e.g. “Mineur, ton bonheur”, by Abbé Pierre Kaelin).

There are several elements in the documentary that are consistent with the common discourses on dams that have been analysed in the scientific literature, and in particular with a modernist discourse (Boelens et al., 2019).

First, the recollections of the workers point up the immensity of the infrastructure and the technical achievement it represents. The dimensions of the dam and the number of tunnels and water intakes are regularly referred to by the engineers and by the miners. The shots centred on water intakes and tunnels also reinforce the discourse on the immensity of the infrastructure. Many details are given on the way the galleries were built (on the material and tools necessary). The camera follows the water’s path from the water intakes to the hydroelectric plants; although the water itself is not very visible (we mostly see the high voltage cables, the numerous tunnels, and the mountains under which the water circulates in pipes and tunnels). Finally, the dam, which is constantly described as gigantic, is also portrayed as a huge and “exceptional” project – the largest civil engineering project in Post-WWII Europe – in which the workers had the chance to participate.

Second, the documentary mostly conveys a discourse on ‘water-as-a-resource’ (Yates et al., 2017). The interviews narrate the lack of energy during the Second World War and Switzerland’s project to exploit water as much as possible to prevent possible and future energy shortages. An engineer explains that in the 1950s, Switzerland decided to accumulate as much water as possible behind dam walls in order to produce energy during winter. Moreover, he underlines that the dam project was planned in different phases so as to begin exploiting water for energy production before the project was entirely completed.

Third, the construction of the dam is at least in part shown as battling with nature. When describing his work, a miner explains that he had to “overcome the mountain”, that he had to break and shatter the rock, with tools but also with courage, willpower, and endurance. In some cases, the narratives of the workers showed that nature could resist, as some accidents revealed. In others, nature is represented as having been tamed and even “strangled”, according to an assistant-geometer.

The documentary also shows the influence of the dam construction on society through the perspective of the workers, and recalls its cultural and social values. Poems on the dam are quoted, and notably those of the Swiss poet and writer –who worked as an assistant surveyor on the dam site and who is also interviewed in the documentary – Maurice Chappaz. The works are also described as having forged a generation of men who left home and their families to elevate their social and economic status but which may have contributed to isolating them, at least for some time, from their families; for example, a worker explains that his children grew up without him while also saying they are today grown up and well.

To conclude, the film appears to be a testament to the people who worked on the dam sites; for better or for worse. It conveys a rather complete picture of the living and working conditions of the workers, based mainly on their accounts. The film is not intended to document more fully the social and ecological consequences of the dam: it does not address the direct influence of its construction on the Swiss industrial sector or on society as a whole (moreover, women are hardly present in the documentary, being undoubtedly a minority on the construction site), nor does it deal at all with the impact of the infrastructure on the aquatic environment, or with water management issues beyond the use of water for energy production. Finally, it is regrettable that the sources in general, and the names and functions of the people interviewed in particular, only appear in the end credits; more contextualisation would perhaps have made it possible to insist on the diversity of the situations of the various workers (perhaps the film was seeking the opposite, and wanted to insist on a certain equality of workers, all of whom are worthy of being called Titans).