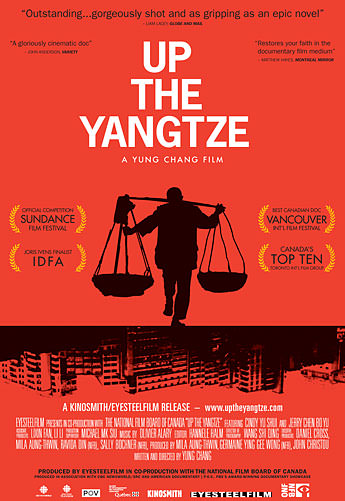 In 1956, Mao Zedong envisioned the construction of a large dam, after swimming in the waters of the Yangtze river:

[…] Walls of stone will stand upstream to the West

To hold back Wu Shan’s clouds and rain

Till a smooth lake rises in the narrow gorges

The mountain goddess if she is still there

Fifty years later, in 2006, the world indeed changed. A gigantic statue of the Jade Emperor is sitting on a hill, gazing at the same waters where Mao once swam. Under its peaceful gaze, a luxury cruise filled with Western tourists navigates upstream towards the Three Gorges Dam (TGD), the biggest hydroelectric plant in the world (Wilmsen, 2018). In this farewell tour, tourists wave goodbye at a landscape doomed to change drastically once the dam is completed.

Yung Chang’s ​Up the Yangtze (2007) tells a story of loss, social inequality and power dynamics set in China’s rapidly changing economy. The documentary discloses what forced relocation means for a commoner in China; as the gates of the dam close and the water rises, inhabitants of the area surrounding the TGD are forced to resettle. Following the cruise’s route towards the dam, Chang’s storyline focuses on Yu Shui, a young girl whose dream to go to university is put aside to go work on a cruise boat, and on her family, soon to be displaced by the rising waters.

Life onboard the cruise is a metaphor of the hierarchy of the outer world, a world that triggers strong emotions through Chang’s neo-realist powerful repertoire of contrasting images. Surreal luxury and detachment on the cruise screech against the poverty of Yu Shui’s family hut built on the banks of Fengdu. Idyllic shots of traditional boats at sunset are soon replaced by the dam’s heavy concrete walls. ​Up the Yangtze​’s masterful mélange of cuts and sub-narratives triggers a deep sense of loss and impotence in the spectator. Through escalating levels of pathos, the documentary unveils the contradictions embedded in China’s neoliberal approach to resource management. Eventually, a time-lapse captures the waters rising dramatically, submerging Yu Shui’s home. Her father, a skinny peasant, carries heavy furniture up a slope. There’s no certainty about the family’s future, nor about the 1.3 million people that will be displaced.

Up the Yangtze analyses the issue of involuntary resettlement, simultaneously uncovering social inequalities in China. Involuntary resettlement, defined as “the permanent forced relocation of entire households” (Wilmsen, Webber & Duan, 2012, p. 356), can be classified into three types: political, environmental, and infrastructure-induced (Heming, Waley & Rees, 2001). Dictated by the ambition to control nature, the widespread practice of dam building has accelerated infrastructure-induced resettlement in China (Wilmsen, 2011). The relocation prompted by the TGD project is considered the greatest of its kind, affecting an estimated 1.3 million people (Duan & Wilmsen, 2012; von Mossner, 2012).

Chang’s documentary follows the Yu family in their rural-to-urban resettlement struggle. Like 42% of the population displaced by the TGD project, the Yu family are rural people facing resettlement to an urban area (Tan, Chen & Hugo, 2009). This group has been shown to face more issues in comparison to the relocated urban dwellers. This is due to the difficulty with restoring one’s livelihood encountered by farmers resettled into cities (Duan & Wilmsen, 2012). The TGD construction has resulted in the loss of fertile agricultural land, negatively impacting both the quantity and quality of the farmland left for the displaced rural population. Often lacking the skills and education, the rural migrants find themselves unable to undertake an alternative profession (Duan & Wilmsen, 2012). This is the picture Chang manages to capture in his documentary. Unable to continue deriving income from agriculture, while faced with swelling expenses of urban living, the Yu family is a living proof of Tan, Chen and Hugo’s (2009) claim that “impoverishment and disempowerment are the rule rather than the exception” (p. 474) among the TGD rural-urban relocatees. However, a recent longitudinal study on TGD displacement suggests that the long-term economic gains of relocation can be significant (Wilmsen, 2018). This shows that complex projects such as the TGD cannot be interpreted as a black-and-white issue. ​Therefore, it is important to consider that Chang’s directorial choices cut and shape a specific contextual frame (von Mossner, 2012).

Chang’s usage of outlined contradictions and dichotomies underline the existing social inequalities between poor and rich, state and individual, middle-class and peasant, providing a powerful, however not scientific, analysis. These dichotomies point at the social injustice, which originates from the political ecology in which individuals live. Political ecology shows how “the distribution of power […] determines the use of the natural environment between categories of humans and with regard to other species” (Rodríguez-Labajos & Martínez-Alier, 2015, p. 538). The usage reinforces the documentary’s important message: the power dynamics and institutional framework in the process of relocation. Chang demonstrates affrays with forceful local officials; he mentions the powerful position of corrupt officials, who withhold relocation compensation; he displays distraught elderly praying in a modern-day China, in which myths do not hold value any longer. This rural discrimination, fueled by urban-based institutions, is in line with the analysis of Heming et al. (2001) and Wilmsen et al. (2011).

In the case of the Yu family, previous cultural-institutional structures—due to his rank in the Kuomintang administration, Yu’s father was degraded after the ‘liberation’—still affect his contemporary socio-economic situation—being illiterate and poor. Sentences like “There is nothing I can do. […] [It] is a national project, not a private”; “you cannot compare us to others” or “remember […] to listen and obey” characterise their humble submissive position in Chinese society. Yu restricts himself from making any judgements on the TGD, ​because of his illiterate peasant position. The dichotomy in the sentence “It’s beneficial to our country, but for individuals, I don’t think it will do me any good” characterises the institutional framework in which the greater good outweighs the individual. Their livelihood is inferior to the ‘ideal Chinese’ livelihood: a brick house, a worker job, paying for water and vegetables rather than living as subsistence farmers.

In a civilisation without robust civic society organizations and with strong state-centred institutions, apart from the normative profitability or harmfulness of the TGD (Yeh & Lewis, 2004), the statement of a moved local vendor lingers after the end credits: “It’s hard being a human but being a common person in China is even more difficult”.

Wilmsen, B. (2016). After the Deluge: A longitudinal study of resettlement at the Three Gorges

Wilmsen, B. (2018). Is Land-Based Resettlement still Appropriate for Rural People in China? A