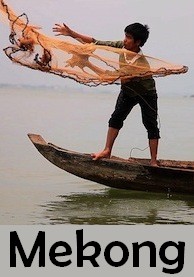 'Mekong' is a documentary from 2013 that explores the wave of hydropower dam construction in Laos, Cambodia and Thailand. The general context is that of 60 million people living in a basin (Mekong) where fisheries are a major source of livelihoods and where the different fish species total 1200. The region is fast developing and power-hungry. Hydropower looks like a natural source of energy to be tapped.

Laos, with its ambition to become the battery of Asia, already draws 33% of its revenue from hydropower. The officials interviewed in the film claim that they apply international social and environmental standards and have hired, at a price, foreign experts to guide them. Dams on the Mekong are described as transparent because they are run-of-river schemes: "it is like having no dam", according to the minister in charge. University researchers are shown to test fish ladders. Some critical aspects are, nevertheless, mentioned: the fish are unlikely to be able to climb ladders of more than 10 m; submerged roting trees in the reservoirs produce hydrogen sulfides which have pushed locals to relocate; although considered by the government to have received a 'golden package' the 4000 people displaced by the Theun Hinboun project found themselves relocated in a place with no fish and no water. It is noted that the Xayaburi dam, one of the projects developed on the main stem of the Mekong is in fact a private investment by Thai companies and that the energy to be produced is destined to the Thai market.

In Cambodia 1 million people are said to be economically dependent on fisheries, from which the country's population draws 70% of its animal proteins. Despite its high hydropower potential the country has one of the highest electricity price in the world, is bedeviled with power cuts, and sees its development hindered. Twenty dams are planned, two on the main stem of the Mekong (Sambor and Stung Treng). The Lower Sesan II dam is taken as an example to show that planning is done without contacting or even informing local people (5000 would be displaced by this dam). The distress and apprehension of people are emphasized.

The film then focuses on the infamous Pak Mun dam in Thailand. The 20 year struggle of affected populations is briefly recalled. The power generated by the dam is shown to be less than that consumed by Bangkok's three main shopping malls. The future looks uncertain for the Mekong River basin where 148 dams are planned to be constructed in the next decade.

The film attempts to strike an arguably difficult balance in a very polarized debate on the consequences of dam construction in the lower Mekong basin. It emphasizes the impacts on fisheries and associated livelihoods, as well as those on displaced local populations. The choice to use a few testimonies of concerned people to illustrate social impacts helps make the issue concrete and emotional. The focus on three particular projects, however, opens the way to a critique by officials that they have been purposefully selected and do not reflect the larger situation.

The public is left with a doubt as to whether impacts can be mitigated and whether there are alternatives to a quest for energy that is somehow presented as ineluctable. The film could have broadened the debate to the question of the planning of energy production in general and discussed options in terms of energy supply but also demand. The case of the Nam Theun 2 dam in Laos, could also have been made use of to show the difficulties to improve the process of dam implementation and the reluctance by governments to broaden its governance. The films also does not attempt to address the bigger picture of dam construction and to document the rationales, discourses, and the financial and political interests of the main actors in that game: the politicians, the construction companies, the financiers.

This is hardly surprising if one notes that the film has been funded by the international donors supporting the WLE (water, land and ecosystems in the Mekong) program, in particular Australia and Sweden, which also support the Mekong River Commission (MRC) and its country members. The path is narrow for actors who cannot antagonize regional governments and, yet, are bent on trying to enhance hydropower decision-making in the region.

It is interesting to note that although clearly not overly offensive the film was criticized by officials from the Lao government, one of them finding that "the negatives were examined much more than the positives (…) and that this film is quite biased and aims to paint the dam in a negative light.” The WLE has posted a page that almost sounds as an apology which, again, illustrates the constrained environment of multilateral cooperation.