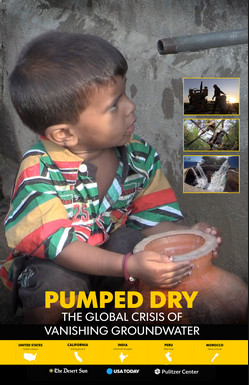 The film starts with a footage of the Niagara Falls and the observation that its flow is of the same order of magnitude as that of the stream of groundwater being abstracted from aquifers in America. As its title indicates, the film illustrates the global water crisis resulting from ubiquitous groundwater overexploitation, zooming in on the cases of India (Punjab and Maharashtra), Kansas, Peru, Morocco and California.

These different settings offer very similar observations: aquifers have been dropping and no water is found at depths of as much as 300 m; corporate agriculture has the capital to drill deeper and dries up domestic wells and those of small farmers; thirsty crops are grown despite water scarcity because greed is the driving force ; people wonder what will be the fate of the next generation, as groundwater resources near exhaustion and the race to the bottom prevails.

The film concludes with a series of alleged solutions: 'Use water carefully and more efficiently', 'increase the recharge', 'use more drip irrigation', 'change the crop mix', 'raise awareness of the public', 'price water at its economic value and not according to the cost of service', 'get ownership from stakeholders by acting collectively'…, while the final word recommends to "scrap the whole thing and start from the beginning, do it all over again and it will be completely different".

The film does a good job at illustrating the consequences of groundwater overexploitation across the world, although it focuses on economic and social impacts, largely missing out environmental aspects.

The film is dominated by a lingering feeling of hopelessness conveyed by all the interviewees who lament the impending catastrophe with hardly a mention of what could be done, whether by collective action at the grassroots level or through the intervention of the state. The desperateness is particularly striking in the case of the US where the uncontrolled expansion of irrigation (e.g. irrigated vineyards in California's Central Valley) seem to be taken for granted, as is the perspective that the dust bowl years are soon to be back. The grapes but with hopelessness rather than wrath…

The main and surprising weakness of the film is, to say the least, its cursory treatment of the solutions to the crisis, which are squeezed in the last three minutes of this one hour movie.

The film does not attempt to unravel why this shopping list of possible actions has so far been so extraordinarily ineffective, why procrastination has prevailed upon any measure of political will in the face of a problem that has been manifest for, often, at least three decades. The fallacy of the "tremendous potential efficiency gains in irrigation" is unfortunately given credit and the inconvenient truth is only hypothesized in passing by Peter Gleick: "In some places it is possible that we are taking too much water out of the system and the only way to bring it back in the balance is to reduce what we're doing". Indeed, but who will put an end to the party?

See also the excellent web-based summaries of the case studies prsented in the film by The Desert Sun/USA Today.