America’s Water Crisis: From contamination in Flint to shortages in the southwest 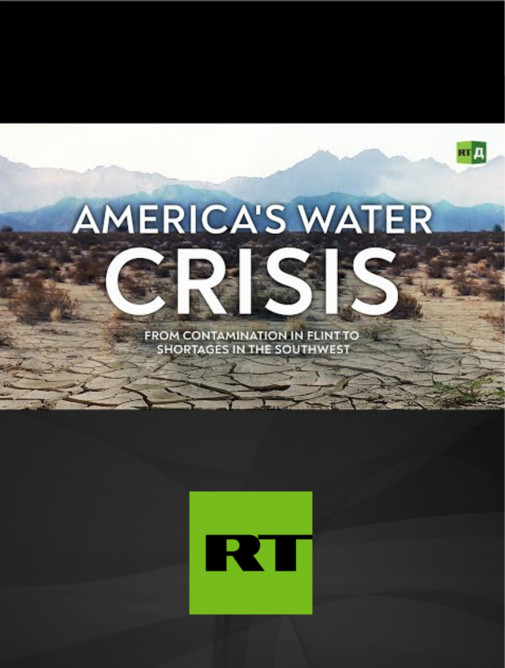 The documentary starts with the story of Flint, Michigan, where in 2014 the source of water supply was shifted from Lake Huron to Flint River, a river with very poor water quality, high lead content, and high corrosiveness, to the point that the plant of General Motors had to stop using it. Health impacts on local communities are documented, with distressing testimonies of throat cancer and records of thousands of children being affected.

Authorities at all levels agreed with the shift in water sources despite full knowledge of the problem of water quality in the river but no one has, up to now, been held accountable or prosecuted. In 2019  only eight officials were waiting for court case hearing. Authorities now assure that the crisis is over but people still buy bottled water (kilometer-long files of cars waiting in line can be seen along some roads).

Apart from health hazards and contamination, the documentary points to several other traumatic impacts : the plastic crisis, due to the high amount of plastic bottles accumulating in landfills; bacterial issues with the water that sits; people having to buy bottled water but still receiving water bills for the water they don't use any more.

Zooming out, the documentary paints the dire situation of domestic water quality in the United States. A 2015 study showed that 77 million Americans consume drinking water from pipelines that do not meet federal standards, while 15% of residential buildings in America are possibly supplied with polluted water. In addition, many contaminants are not regulated by law at all.

In addition to these water quality problems, Coty Montag, from the Legal Defense and Educational Fund, reports that in 2017 12% of Americans could not afford the price of water. While the price of water used to be 2.5% of the annual income there are people in Detroit who now use 20% of their income to pay their water bills.

in Detroit or Baltimore thousands of black families have seen their tap shut off and prices have increased by up to 100% in two years. Aurora Harris, cofounder of "We the people of Detroit", explains that unpaid water bills accumulate and go from the company to the state, and then to the county jurisdiction which can then issue the foreclosure of the house…

The second part of the documentary takes us to the lower Colorado basin, with views of the Hoover dam and numbers showing the very dry climatic record of the past 20 years as well as the large population that rely on the dam and Colorado waters.

It is emphasized that the driest states in the US are those with the fastest growing population, and therefore in need of more water. Maricopa County in Arizona, serves to illustrate how golf courses, gardens and swimming pools have flourished in the desert. Yuma County is also conspicuous as the third nationwide area for vegetable growing.

A staff at Central Arizona Project explains that many efficiency improvements have been made, that Colorado waters can now be stored underground, and that the problem should be relieved by the transitioning (and reallocation of water) from low efficient agriculture to more efficient municipal systems. Likewise, a grower boasts that farmers are now using 20-25% less water to grow the same crop as before, while for certain crops they producing 30 to 40% more with the same amount of water.

The last interviewee, nevertheless, stresses that the Colorado sharing agreement was based on obsolete numbers of available water and can't be relied upon to bring the basin back to sustainability. Another set of agreements is expected in 2026: "water is finite, nobody's making new water", and life as well as economic activities will have to be attuned to the reality of the water supply.

The documentary ends up with a short positive note, mentioning the restoration of 140 actors of wetlands in an Indian reservation, which brought a bit of life back.

This short documentary discusses two widely debated water issues in the US: the Flint water crisis, and water shortages in the Southwest. The information is rather unoriginal and it's unclear what the contribution of the film is given the extensive coverage which has been given to these two topics.

On the Flint crisis, nothing is added to the many existing documentaries, including "Murky waters of Flint. How a whole city was poisoned" www.youtube.com/watch?v=WMvh57qJ6ZU, also produced by RT four years earlier. This, of course, does not diminish the fact that the story remains damning and testimonies poignant. As one of the interviewees remarks "We're poisoning our poors and our minority communities… one hour from the Great Lakes", for the only purpose of cutting costs and saving money.

With a transition that borrows from the usual soundbites frequently repeated by journalists ("Extreme Water stress affects the fourth of the world population"), the part on the Southwest water shortage is also unoriginal: it harks back to the situation of overallocation of the Colorado River, spots extravagant uses of water in the desert, and emphasizes the conflict between agriculture and cities.

Overall, viewers not acquainted with the two topics addressed in this documentary will find here a short introduction to some of the American water woes. Others should probably be directed to spending their time on more detailed explorations.

Other Water Alternatives resources related to the Flint and Colorado crises:

A conversation between the authors of "The poisoned city – Flint’s water and the America urban tragedy" and "Flint fights back: Environmental justice and democracy in the Flint water crisis". http://www.water-alternatives.org/index.php/boh/item/150-flint2