Water permeates all realms of life and many scientific disciplines. Water problems are often taken as technical issues, subject to rationalization, optimization and best addressed by expert knowledge. Yet, in the past three decades water issues have proved to be highly divisive and have generated heated debates. Engineer-centered approaches have been challenged or paralleled by concerns for the role of social organization, institutions, power structures and, more generally, politics; economists have assumed an increasingly prominent role in stressing the significance of demand management and economic efficiency; environmentalists have been active in introducing a more holistic view of ecosystems, underlining the importance of water for the environment and human health; social activists have vied for framing access to water as a human right.

As water increasingly appeared as a problem of societies sharing a scarce resource, the debate expanded into the modes of governance deemed appropriate to achieve desired outcomes. Although the concept of IWRM (Integrated Water Resources Management) holds the promise to reconcile goals of economic efficiency, social equity and environmental sustainability it is becoming clear that there is no consensus on how to weigh these priorities, or on how best to ensure their realization. Antagonistic views favoring either state control, market regulation, or management by communities or the civil society have been proposed. IWRM is read and appropriated by different constituencies to underpin different approaches to water resources management reform, ranging from rational-planning-based social engineering frameworks to politically grounded strategic action perspectives.

Scale has also emerged as a crucial factor. Water management solutions are clearly scale-dependent, from the user or community level to the system (distribution network) and river basin levels. Yet these scales come under interaction through the hydrologic cycle, often in an uncontrolled manner, prompting the need for corresponding nested levels of management and governance. Water policies are supposed to encapsulate state strategies for managing this complexity and have also increasingly become a subject of research.

Freshwater resources management is inherently a regional phenomenon, given how water flows over and under land. 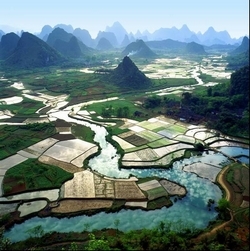 The editorial team of WaA shares the view that water problems have often been framed in too narrow and too disciplinary ways, despite the apparent emphasis on integrated management. It also reckons that the political dimension of water resources development and management at all scales has been underplayed. As a result, perhaps, debates have often revolved around, and been stifled by, ‘social engineering’ concepts and models. Critiques of dominant modes of addressing water issues have been limited and too often been left to radical or ideological contenders. WaA is meant to provide space for creative and free thinking on water, fostering debate, eliciting innovative alternatives, promoting original analyses and constructive critiques.